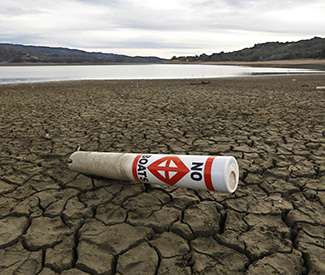 At the tail end of a dry, dusty summer, California continues to weather the effects of an extraordinary drought.

Wildfires have swept through forestlands in the Sierra Nevada foothills, Mendocino County, and near Yosemite recently, making for smoky skies and glaring red sunsets. Meanwhile, shrinking reservoirs have prompted the state to issue formal crackdowns on watering lawns and washing cars.

These extreme circumstances may be linked to why voter support for Proposition 1, a $7.5 billion general obligation bond for water-related projects, has initially registered high. Elected officials have trumpeted Prop. 1 as a measure that will alleviate the worst impacts of the drought.

In the Bay Area, 62 percent of likely voters said they’d vote in favor Prop. 1, while that support came in at 52 percent statewide, according to a recent Field Poll. The bill that became Prop. 1 won bipartisan support in the Legislature after lawmakers struck a deal to kill an earlier $11 billion proposal and replace it instead with the slimmed-down version.

“We really don’t deal with the drought here,” said Connor Everts, executive director of the California Watershed Alliance, after reviewing the details.

Everts spoke during a Sept. 11 conference call organized by opponents of Prop. 1. They reject the water bond mainly because it dedicates a significant chunk of funding, $2.7 billion, toward new dam projects. They view this as an unacceptable tradeoff.

“We can’t conjure water out of thin air with new dams,” pointed out Barbara Barrigan-Parilla, the opposition campaign director, who runs a grassroots organization advocating for sustainable management of the Sacramento-San Joaquin Delta. More should go toward conservation measures, she said.

The Delta has suffered hefty ecological impacts from freshwater pumping to feed the state’s water-delivery system. “Protect the Sacramento-San Joaquin Delta” is the first guiding principle to appear in a policy document establishing the basis for Prop. 1, but Barrigan-Parilla and others remain skeptical. Friends of the River has also come out against Prop. 1, as have many members the Environmental Water Caucus, a statewide coalition of grassroots organizations.

State lawmakers have been trying to pass a water bond since 2009, but earlier versions were shot down as bloated and pork-laden, failing to gain traction.

In June, Gov. Jerry Brown called for a $6 billion bond that would throw $2 billion toward dam projects, but the needle moved after Republicans — taking advantage of the fact that it needed a two-thirds majority vote to pass — withheld support unless they were promised more money for dams.

Water storage is a high priority for agribusiness farmers, whose sprawling croplands soak up vast quantities of water. A whopping 70 percent of all water rights claims issued by the State Water Resources Control Board are for agriculture, according to a University of California at Davis study.

“If these dams actually get built, we believe they will take more water out of the rivers that are dammed, and there will be less to come out of all of the environmental benefits,” envisioned by other provisions in the bill, said Carolee Krieger, executive director of the California Water Impact Network (C-WIN). “In the long run, we believe it would be way worse for the environment.”

Significant Prop. 1 funds would also be committed toward cleaning up groundwater, restoring damaged watersheds, advancing water-treatment technology, and ensuring safe drinking water access for low-income communities. The Sierra Club issued a statement announcing that while it’s supportive of these good programs, its official stance on Prop. 1 is “no position.”

Opponents of Prop. 1 noted during the call that California faces a fundamental problem that won’t be addressed by the water bond: The amount of water allocated by water rights claims is five times higher than what actual river flows provide in an average year.

“The one thing that must be done is to balance water rights claims to actual supplies,” Krieger said. The difference between real supplies and what’s promised in a contract, she added, is called “paper water.” This means many users receive less water in practice than what they’re technically promised, but those unrealistic promises make for confusing and conflict-heavy management of scarce water resources. The bizarre dysfunction is well-documented in a UC Davis study published in February. Of 27 major rivers, the study found, 16 had allocation levels “greater than 100 percent of natural supplies.”

The state “simply does not have accurate knowledge of how much water is being used by most water rights holders,” the UC Davis study noted, making it “nearly impossible” to reduce consumption or manage water supplies in a way that’s more equitable and environmentally responsible.

If voters grant their stamp of approval for the $7.5 billion water bond, the state may well move forward with important environmental initiatives, as well as multi-billion dollar dam projects that will take decades to build.

But no matter what happens, money still can’t buy snowfall in the Sierras, and it’s going to take more than cash to get to the root of California’s water woes.