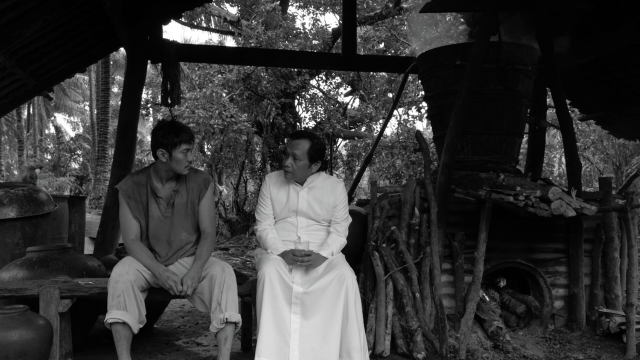 The unstoppable Jesse Hawthorne Ficks keeps his eyes open 24/7 through another Toronto International Film Festival, and lives to tell the tale (but shares no spoilers!) Read on for the first in several reports back from the 39th TIFF.

Starting on a high note: Nuri Bilge Ceylan’s Winter Sleep (Turkey/France/Germany) won the Palme d’Or at the Cannes Film Festival earlier this year, so it arrived in Toronto with its share of hype. I can report Sleep is the director’s funniest and most satisfying film to date. That said, it does run 196 minutes, and more than a few critics walked out early, which poses an ever-important question about the current trend toward slow-moving, observational, and meditative narratives: Who’s actually watching ’em?

With characters that come together through long sequences in which intense emotions are slowly drawn out through passive aggressive actions, this immersive class study — similar to Akira Kurosawa’s High & Low (1963) — clearly polarized audiences’ immediate interests. My own interests lead me to wonder what long-term effects that this type of cinema will have on contemporary audiences. Has it always been this divided? If TIFF critics don’t have the energy or enough time to experience this masterpiece, how will it come up in conversation when Oscar fans are debating which film had the best acting? What about those more mainstream moviegoers who went to see Guardians of the Galaxy more than once?

Looking back 40 years, Milos Forman swept the Oscars with One Flew Over the Cuckoo’s Nest, and Steven Spielberg’s Jaws (1975) was luring in audiences for second and third helpings. Meanwhile, an Algerian master named Mohammed Lakhdar-Hamina won the Palme d’Or at Cannes with his 177 minute Chronicle of the Years of Fire, an exploration of the Algerian War of Independence as seen through the eyes of a peasant. I guess there has always been a cultural gap between Oscar-bait, popcorn entertainment, and political art cinema … and there probably always will be.

Also relevent to any discussion of very, very long films: Lav Diaz’s follow-up to last year’s 250-minute Norte, the End of History is yet another long-form master work — and in my opinion, the best film at this year’s Toronto Film Festival. The Filipino director made a surprise appearance to introduce his 338-minute From What Is Before. TIFF programmer Andréa Picard seemed even more surprised than the audience when Diaz’s humble introduction consisted of  “I hope you brought a pillow and some blankets.”

Committing to a Diaz film is comparable to joining a motion picture religion. Not just due to the length of his films, but because of his conviction in delivering something truly profound. Like some of his own characters, Diaz has the power to astral project the viewer into another world. From What Is Before takes place in 1972, just before President Ferdinand Marcos’ announcement that he was putting the entire country under martial law. A forgotten farming community in the provinces must immediately shift its focus to survival.

As the story unfolds much like the chapters of a novel, each character (and the dilemmas he or she faces) slowly comes into focus, sequence by sequence. Many of the film’s most devastating scenes featured Itang (Hazel Orencio), a young woman taking care of her mentally challenged sister. At the Switzerland’s Locarno Film Festival, Orencio rightfully won Best Actress, and From What is Before took home the top award, the Golden Leopard.

For TIFF audiences and beyond, the biggest question is: Will you take the time to learn Diaz’s artistic language? His films blend the convoluted past of the Philippines with the mysterious depths of human beings. Yeah, 338 minutes is long. But like Ingmar Bergman, Andrei Tarkovsky, and Claire Denis, Lav Diaz is speaking a cinematic vocabulary unique to the world. Don’t let your laziness get in the way.