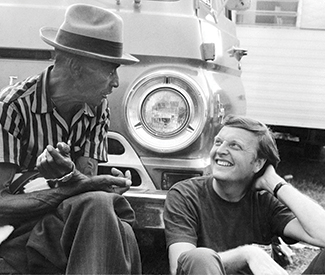 FILM In an early scene from Maureen Gosling and Chris Simon’s documentary on the life and musical obsessions of their mutual friend Chris Strachwitz of Arhoolie Records, we see Strachwitz behind the wheel of his car, struggling to explain the common thread that joins his wide-ranging musical tastes, from country blues to Cajun Zydeco to bordertown conjunto.

“It’s just got some guts to it. It ain’t wimpy, that’s for sure. It ain’t no mouse music.”

Mouse music? In a later scene, some of his friends attempt to define the term.

“Music that is popular.”

Taking their documentary title (This Ain’t No Mouse Music!) from their subject, Gosling and Simon make their own attempt to define the term, following Strachwitz from the crowded warren of his brick-and-mortar, El Cerrito shop, Down Home Music, to the sultry backyards of the Louisiana bayou, where making music is just “a pure joy” — and recording it is Strachwitz’s fondest obsession.

This Ain’t No Mouse Music! is a fascinating road trip through the dusty back roads and anonymous beer joints of “the music of your neighbors.” It follows its subject from his early associations with iconic blues men Lightnin’ Hopkins and Mance Lipscomb; his subsequent work with Mississippi Fred McDowell and the powerful Big Mama Thornton; his serendipitous acquisition of the publishing rights to Country Joe McDonald’s “I-Feel-Like-I’m-Fixin’-To-Die Rag”; his decades-long record-collecting habit (his renowned Frontera collection alone tops over 40,000 albums); his love of New Orleans jazz and Louisiana Zydeco; and his explorations of Tex-Mex conjunto and Appalachian country.

The filmmakers don’t skimp on the soundtrack. There are close to 70 songs used in the 91-minute doc, including historically important recordings — such as Lightnin’ Hopkins’ version of Mance Lipscomb’s “Tom Moore’s Farm,” which led Strachwitz and music historian Mack McCormick (who deserves a documentary of his own) to Lipscomb’s front door in Navasota, Texas, a key discovery for all parties concerned. Taking a page from Strachwitz’s own playbook, the directors are also on hand to record a wealth of vernacular music being played on the spot: the Treme Brass Band on a New Orleans street corner; members of the musical Savoy family playing a backyard barbecue in southwest Louisiana; a front-porch accordion performance in Texas with Santiago Jimenez Jr.; and a raucous Zydeco sing-along in Strachwitz’s kitchen with youthful standard-bearers the Pine Leaf Boys. Throughout, Strachwitz appears most often in his preferred habitat, fiddling with mics and levels and capturing, for posterity, the living breathing music he deliberately surrounds himself with.

Dedicated to the late Les Blank, with whom Gosling, Simon, and Strachwitz all collaborated with over the years (Gosling and Simon as assistant filmmakers; Strachwitz as co-director and producer of several music films, including the 1976 classic, Chulas Fronteras), This Ain’t No Mouse Music! makes good use of footage from several of his films. These include 1970’s The Blues Accordin’ to Lightnin’ Hopkins, and the 1973 Clifton Chenier biography Hot Pepper. Strachwitz even echoes a popular Blank sentiment in a moment when he explains his recording process: “My stuff isn’t produced, I just catch it like it is.”

Gosling and Simon, who became filmmakers directly through Blank — Gosling was his assistant for 20 years, starting in the early ’70s, while Simon was married to him for 20 years and began working with him in a variety of capacities, because “otherwise I’d never see the guy” — credit him for teaching them the importance of approaching a subject with curiosity. They were also inspired by the principle of going in “not knowing anything,” and allowing the story to emerge in its own time, creating a gentle meander through certain key moments rather than a tightly-controlled, connect-the-dots narrative.

Keeping the focus on the music and musicians Strachwitz adores rather than the man himself may be the greatest homage Gosling and Simon can offer their subject. However, this choice leaves a sometimes distracting gap at its center, not quite filled by flashes of Strachwitz’s interior world that do find screen time: a moment of pained disgust at being asked for five dollars for a lemonade made with “just one lemon;” a shame-faced recollection of not taking a stand on behalf of Lipscomb in a segregated Southern café.

Approximately 30 seconds of the film are dedicated to the fact that he never married, another 60 to his family’s flight from Silesia, East Germany (now Poland) in 1945. But never far from the foreground are the many moments that cement Strachwitz’s role as a conduit through which so many overlooked, homegrown genres and musicians have been passed through to the American public, from the days when he drove his inventory around in the trunk of his car, to the present, when he can call business manager Tom Diamant with news of his latest discovery.

“Whether we make money on it or not, we put the records out,” Diamant observes somewhat wryly, a testament not just to the current challenges facing the music industry as a whole, but to Strachwitz’s still-boundless enthusiasm for his profession that supercedes the kind of business “sense” that focuses narrowly on dollars and cents.

Despite his admitted initial reluctance to be the subject of a documentary rather than the producer, sound engineer, or “song-and-dance man” glad-handing the performers before their sets, Strachwitz emerges as a character in his own right — a “classic record man” who entered the music business with the purest of intentions, to make the records he wanted to hear. And 54 years on, we see him doing just exactly that: no compromises, no bullshit, and, most especially, no mouse music. *