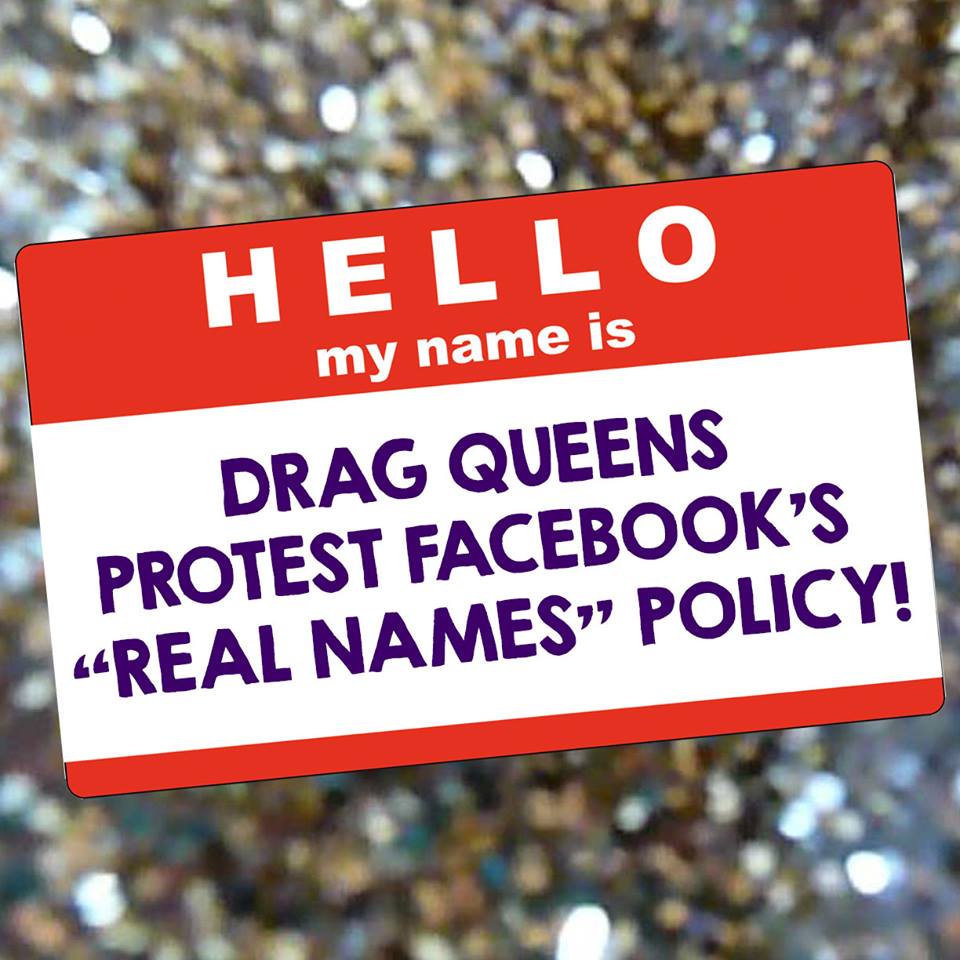 UPDATE: Sister Roma just posted this to her Facebook page:

Just got off the phone with Supervisor David Campos and representatives from Facebook. They have agreed to meet with us and members of the community for an open dialogue regarding their legal name policy. After the conversation I am more hopeful than ever that we can reach a solution. We’re working together to make change and I thank all of you for your support!”

ORIGINAL POST: Drag queens throughout San Francisco and the cyberverse are planning to protest at Facebook HQ on Tuesday at 9:30am, if a meeting between Facebook representatives and Sister Roma of the Sisters of Perpetual Indulgence tomorrow yields no favorable results.

At issue: a controversial new Facebook policy that is forcing performers to use their legal names (rather than drag or other professional names) on their personal profiles on the social media site.

“We are mobilizing. If Sister Roma’s talk with a Facebook rep tomorrow does not go as we hope, then the protest is full speed ahead,” T-Shack party founder Heklina told me over Facebook. “We are meeting in the Safeway on Church St. Parking lot, and doing a convoy to FB HQ in Menlo Park. The protest is set to begin at 11am, with members of David Campos’ staff, the Harvey Milk Club, the Sisters, and every drag queen we can mobilize.”

The protest plan came after a quickly called community meeting at Cafe Flore tonight. Sister Roma, now identified by a different name on Facebook, has been leading the charge against the policy, joining with others in saying that forcing drag and other performers to use their “real names” is uneducated, insulting, and potentially dangerous.

“I use this site to keep up with friends and simply don’t want employers or crazy stalker people to log on and search me,” Sister Roma told SFist.

A Facebook representative responded to queries about the new policy in the Wall Street Journal, “If people want to use an alternative name on Facebook, they have several different options available to them, including providing an alias under their name on their profile, or creating a Page specifically for that alternative persona.”

Presumably, the social media site is pushing this new policy to protect users from spam or scams emanating from fake profiles, but, as the Journal points out, “Facebook’s advertising product, which will bring in an estimated $12 billion in revenue this year, rests almost solely on its ability to gather detailed, accurate information about users.

Sup. David Campos was quick to denounce the policy in a press release, demanding that Facebook meet with performers: “Local drag personalities including Sister Roma, Heklina, BeBe Sweetbriar, Lady Bear, Anna Conda and others have had their Facebook accounts suspended in the past week until they comply with a policy requiring them to use their ‘legal name’ in their profile. Drag queens have expressed concern that not allowing them to use their stage name is a safety issue as it outs their real names and information.”

“Facebook may not be aware that for many members of the LGBT community the ability to self-identify is a matter of health and safety,” the release continued. “Not allowing drag performers, transgender people, and other members of our community to go by their chosen names can result in violence, stalking, violations of privacy and repercussions at work.”

Here is the Facebook event page for the protest. Stay tuned for updates.