Home Viracocha is legit! Here are five things from the past five years... 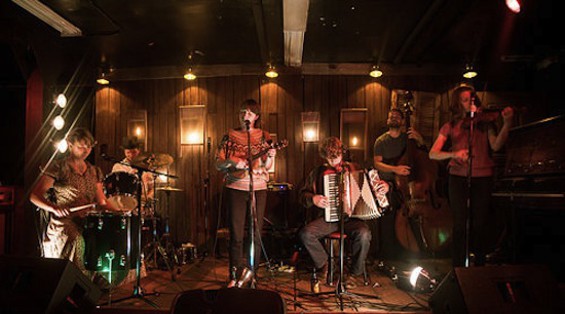 As you may have heard by now, Viracocha — everyone’s favorite Never-Never Land of a music venue/spoken word performance space/speakeasy/antiques store/beautiful place to stop and use the bathroom should you find yourself having to pee on Valencia — has gone legit.

After nearly a year of fundraising, inspections, and meetings with the city’s Entertainment Commission, the dreamily lit basement stage that has played host to so many awesome events will now be operating with an official venue permit.

No longer working under the veil of semi-secrecy, the folks who run the space (the tireless founder Jonathan Siegel, with help from new business partner Norah Hoover and a slew of local artists and musician employees) have spent the last six months renovating the space to meet city standards, and will now be free to actually publicize the venue’s shows. They’ll celebrate tonight with a free little gathering/party at Viracocha from 8pm to midnight — open to the public, legally, for the first time. [See a note Siegel sent to supporters early this morning at the end of this post.]

The booking process is also on the up-and-up, so bands, bookers — if you’ve always wanted to play that room but were unsure about the logistics of setting up a show you weren’t allowed to promote? Drop ’em a line.

Now, full disclosure: Roughly half the people I love in the SF arts scene have at one time or another played there, worked there, or lived there. I’ve watched Siegel give jobs to kids who arrived in San Francisco with very little, and then watched those kids make it a home. If employees or event attendees are there late and anyone seems drunk, he’ll order five pizzas. It’s been problematic, it’s seemed improbable, it has at times appeared to almost be a parody of itself and/or San Francisco. There’s a goddamn lending library in the back room that looks like it was built by whimsical 19th century fairies and chipmunks. But I adore Viracocha, and have wanted it to thrive the way you fall for the runt of any litter, the way you root for any underdog.

What this has meant, practically, as a music journalist, is that while the place is very close to my heart, it’s also been exceedingly frustrating to watch awesome shit happen there and not be able to write about it. Especially since the illegality meant that all things were basically equal and welcome — if that tame poetry reading you want to host is illegal, and so is the free workshop on tenants’ rights? Well, there’s nothing really more illegal about an aerial dance performance/dinner party/burlesque show. It was anything goes, and truly, anything went.

In closing: Congrats, Viracocha. And here are five-plus things that may or not have happened there that I really wish I could’ve written about.

1. The week after Amy Winehouse died, a bunch of local cats (many of whom normally command a pretty penny for live shows) got together to throw a last-minute tribute night revue of sorts. Folks dressed up. There was much sad drinking.

2. Jolie Holland played a week-long residency there, living in the tiny attic apartment attached to the store, and playing shows every night, lulling the packed room into a breathless trance.

3. That there video above (which is not great in visual quality I realize…but oh man, that voice) is also from a regular poetry/music/anything-goes revue called You’re Going to Die, started by writer Ned Buskirk, which continues to bring out some of the city’s finest writers and spoken word artists in addition to musicians. See SF writer and Rumpus film editor Anisse Gross reading at another one here:

4. A staged reading of an early, weird, rarely performed play by Louis CK, starring The Coup‘s Boots Riley as a dumb cop.

5. Hella music video shoots, with both local and big-name folks. Below: Wolf Larsen, and  Atmosphere.

Viracocha is now open to the public, as a live venue in San Francisco!

Through many a trial — months of obstacles, pitfalls, setbacks, missteps, and hard choices — and by the unwavering energy, dedication and resolve of our staff & crew…we finally made it!

Five years ago, Viracocha began as space where creative people and their work could find advocacy. Our contributors arrived from many walks of life and varied circles within the local arts and performing community. That is, until December 2013, when we closed our doors, temporarily, to begin the process of legalizing our venue with the city. We created this underground space, despite the risk, because we felt that San Francisco needed a cultural anchor for its diverse artistic community  a place to gather and express who we are. There is a voice within each of us that yearns to be heard. In a city like ours, it’s easy to feel reduced to a face in a crowd, a point on a graph, a nameless number. We built our venue to become an intimate, welcoming place, where people can feel understood, connect, and feel less alone.

At times, Viracocha seemed to exist beyond the parameters of logic and pragmatism. We’ve had to be discreet when we talk about our space, and at times we’ve been misunderstood, misinterpreted, or misquoted.  When people asked “What is Viracocha, exactly? Who, actually, is behind it?” — the answers were as varied as the items in our shop.  Does secrecy create it’s own allure?  Perhaps so…but now’s the time to put secrets to rest, and open our doors to you! Come and meet the people who call Viracocha home — the poets, artists, and musicians who have worked and played here, laughed and cried, performed and shared. This place was built for you (yes you!) and for all of us — come on by!!