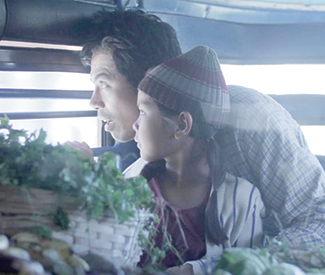 FILM It increasingly seems like the ultimate plan for the poor must be simply to drive them into the sea. What else is going to be done with them if we realize the Koch brothers’ dream of no minimum wage, food stamps, welfare, or Social Security? (One alternative already in practice: Build more prisons, of course.) Hostility toward the have-nots, believing that somehow they got there by being lazy or criminal or genetically inferior, is of course as old as civilization itself. But legislating to create poverty rather than to solve it is a significant reversal over the general trend of American history over the last century or so.

This kind of “Sorry, you’re screwed” mentality may seem alarming here, but it’s a basic part of the social structure wherever economic resources have always been scarcer and a drastic wealth-power divide taken for granted. Part of the impact of Ira Sachs’ excellent Love is Strange, now playing, comes from our horror that this doesn’t happen to these people, since educated, middle-class white Americans aren’t supposed to become more or less homeless. The protagonists in UK-Philippines co-production Metro Manila, however, stir our sympathy but little surprise when they become completely homeless. (Unlike the Strange characters, they have no safety net of friends and relatives who can take them in.)

Oscar (Jake Macapagal) and Mai Ramirez (Althea Vega) are rice farmers who live in the Ifugao province, tending their crop on 2,000-year-old terraces cut into the mountains. It’s grueling work in which nine-year-old daughter, Angel (Erin Panlilio), is already enlisted; another child is still a babe in arms. This stunning verdant landscape, shot by former fashion photographer Sean Ellis (also the director and co-scenarist), might be paradise on Earth with less toil and a lot more pay. But as the Ramirez family discovers, the crop that paid 10 cents a pound last year now only pays two. The family can’t survive on that return — it’s not even enough to buy seeds for next year’s harvest.

There’s nothing they can think to do but to follow the path of so many impoverished rural folk before them and head to the big city. Upon arriving in Manila, they’re stunned by the noise, crowds, and the aggressive police presence; one day they’re horrified witnesses as an attractive woman walking alone is pulled screaming into a passing car and spirited away, though no one else seems to blink. What seems a lucky break with a Good Samaritan turns out to be a scam that robs them of their paltry cash store and the shelter they thought they’d bought with it. Hustling frantically, Oscar gets himself a day’s physical labor, only to be paid with a sandwich.

Time and again, they find those who offer help are predators who recognize easy marks when they see them. Mai is tipped to a barmaid job that even has babysitting. But it’s the kind that starts with the interviewer saying “Show me your tits.” “Daycare” consists of letting the kids crawl around the women’s changing room, and keeping customers “happy” is scarcely distinguishable from straight-up prostitution. Then Oscar’s military-service tattoo gets him embraced as a fellow veteran by older Ong (local film and TV veteran John Arcilla). The latter seems a savior, setting up the family in a fairly nice apartment, taking on Oscar as his new partner in an armed security-guard service where the main duty seems to be running questionably legal amounts of money around.

All this happens in Metro Manila‘s first half, after which it becomes less a tally of everyday exploitations and slum indignities than a crime drama in the mode of Training Day (2001), or Brillante Mendoza’s notorious 2009 Kinatay, which won a controversial Cannes Best Director Prize in 2009 and subsequently played Yerba Buena Center for the Arts. (YBCA’s New Filipino Cinema festival provided Metro‘s area premiere earlier this summer — the Roxie’s single showing this Thursday evening will doubtless be as close to a regular theatrical release as it gets hereabouts.) Ellis’ film isn’t as slickly hyperbolic as Day or as challengingly grungy as Kinatay, inhabiting a useful middle ground between thriller and case-pleading exposé. Itself an audience award winner at Sundance, Metro feels creditably engulfed in its cultural setting — if this were a movie by an old-school Filipino director, there might have been a heavier emphasis on the Ramirezes’ Christianity, which is presented simply and respectfully here but not used to milk viewer emotions.

Ellis funded this feature (his third) himself, the story inspired by a violent fight he witnessed between security guards during a prior trip to the Philippines. He doesn’t speak Tagalog, making Metro one of the better films in recent history by a director shooting in a language he doesn’t understand, something that happens more often than you might think. (Interestingly, Metro has already been remade as the Hindi movie CityLights.) The script he’s co-written with Frank E. Flowers is economical, such that when there’s a rare moment of what otherwise might pass for preachiness, the truth stings instead. When a suddenly less grateful than fearful Oscar tells his boss, “I don’t believe in hurting people,” Ong snaps, “Don’t speak. You have no voice in this world.”

Indeed. Money talks. The rest of you, STFU. *