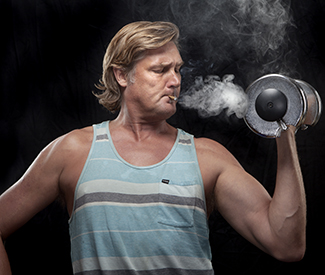 CULTURE Jim McAlpine wants the world to know that not all marijuana users are lazy, permanently couch-locked, junk-food addicted stoners. That’s why McAlpine is organizing the 420 Games, a series of athletic competitions in which weed enthusiasts will run, walk, and bike their way to larger societal acceptance.

The Games’ inaugural event, a five kilometer fun run in Golden Gate Park Sat/13 that McAlpine hopes will attract 500 participants, will be followed by a road cycling competition in Marin County, a “Marijuana Olympics Challenge” in Sacramento, and foot races across the state. “What better way to prove that you’re not a stoner just because you use marijuana, than [by] going out and being motivated and athletic?” McAlpine points out in an e-mail interview with the Guardian.

The visual of hundreds of healthy weed users jogging en masse through Golden Gate Park’s winding green thoroughfares seems like an apt PSA for responsible pot use. The 420 Games also just sound like a good time. At the inaugural event, attendees have the option to skip the athletics completely and come for the afterparty, which features an artisanal beer garden sponsored by Lagunitas and a set by Zepparella, an all-female Led Zeppelin cover band.

Those expecting the baseball bat-sized joints and puking, littering high schoolers present each year at the 4/20 celebrations on Hippie Hill in the park, be warned: There will be no sanctioned on-site cannabis use at the 420 Games, and attendees are encouraged to drag only on legal weed before and after the event. The Games are not a free-for-all smoke out, radical demonstration, or a call to legalize weed now; rather, McAlpine has packaged his sporting events in a way that will encourage even cannabis skeptics to examine their views about marijuana in 2014.

In his previous life, McAlpine was an entrepreneur who ran a discount ski pass company. But drought and years of dismal snowfall have driven McAlpine to find additional ways to spend his time. He was inspired by the potential of the cannabis industry, and seeks to use many of the proceeds from the 420 Games to fund a 501c3 nonprofit, the PRIME Foundation, which he’s establishing. Though PRIME has yet to begin educational programming and McAlpine has few details on when it will begin operating, he told the Guardian that he wants the organization to be a source of education for youth and adults about marijuana addiction, and about the very real benefits of weed and hemp. “I hope we can begin to raise some money to create campaigns to really educate the public on topics like this,” he says, referring to the 420 Games kickoff.

Of course, the 420 Games are not the only proof that weed-smoking athletes exist. One need only look at the countless Olympians and NFL, NBA, and NFL players who have been caught with pot to know that the sporting life is not one that is necessarily devoid of THC. The highest-profile case was that of swimmer Michael Phelps, the Olympic phenom who has won more medals than anyone in the history of the Games (22 total, 18 of them gold). In 2009, three months after dominating the lanes in Beijing, a leaked photo appeared to show Phelps smoking a bong. Since the photo’s depicted infraction took place during the off-season, Phelps escaped Olympic sanctions, but he did receive a competition suspension and lost a few endorsement deals.

In 1998, Canadian snowboarder Ross Rebagliati was nearly stripped of his Olympic gold medal after a post-competition positive drug test, but ducked punishment when it was proven that marijuana wasn’t officially on the banned list of the Olympics’ governing board. It was added three months later, which meant American judo star Nicholas Delpopolo was expelled from the 2012 London Olympics when his results came back positive for pot (he maintains he unwittingly ate weed-infused food, but no exception was extended for ignorance of intoxication).

Josh Gordon of the Cleveland Browns was the NFL’s leading receiver during the 2013 season when he failed a drug test for pot. The league recently announced he will be suspended for the entire 2014 season. Pittsburgh Steelers running backs Le’Veon Bell and LeGarrette Blount were pulled over with weed in their car last month, but have yet to be suspended from play. And of course, who could forget SF Giants pitcher Tim Lincecum’s 2009 off-season misdemeanor charge, when a pipe and weed were found in his car’s center console during a traffic stop? The list of athletes who have been discovered with weed is rather lengthy, all things considered.

The NHL has removed marijuana — and all drugs not deemed to be performance-enhancing — from its list of banned substances, choosing instead to offer optional addiction counseling to athletes who repeatedly test positive. But NFL spokespeople have repeatedly asserted that no change will be forthcoming in the league’s weed policy. This is especially distressing given that football players likely stand to benefit much more than most people, particularly athletes, from marijuana’s pain management effects. A lawsuit filed earlier this year by 750 ex-NFL players takes on the league for alleged distribution of opioid painkillers that have been shown to have detrimental long-term effects on players’ health.

Cannabis’ natural painkillers are a different story. In an interview with the Fusion network, former Chicago Bears defensive tackle Tank Johnson estimated that 70 to 80 percent of NFL players “gravitate toward the green,” and not just for recreational use. “Managing and tolerating your pain is how you make your money in this game,” Johnson said.

Berkeley doctor Frank Lucido knows full well why sports enthusiasts would turn to marijuana. “Some athletes might benefit from using cannabis after sports for the acute pain and inflammation from that recent activity or trauma,” Lucido writes in an e-mail interview with the Guardian. “Depending on the sport, a player may use cannabis before to ease chronic pain or muscle spasm, so they can function better.”

Lucido said he has prescribed various ex-NFL players medical marijuana, has worked with patients on seeking cannabis treatment since the passage of Prop. 215 in 1996, and holds the opinion that performance in some noncompetitive sports can benefit from cannabis use beforehand. He’s not alone. Others have commented anecdotally that weed can improve sporting ability, especially in pursuits involving high levels of finesse like golf and bowling.

McAlpine says thus far no pro athletes have announced their support of the 420 Games. In our interview, he alludes to plans to approach Phelps’ management, but he might have better luck shooting for Rebagliati. After his close shave with Olympic disgrace, the snowboarder is now the CEO of Ross’ Gold, a Canadian company that sells 14 strains of premium branded medical cannabis. Philadelphia Flyers veteran Riley Cote is another ex-pro in the world of marijuana — he recently started a foundation to teach people about the role hemp can play in a sustainable lifestyle.

But perhaps the 420 Games will manage to sway public opinion not with the appearance of gold medal winners, but rather everyday people who use weed in their everyday lives — something that weed expos, with their green bikini babes and emphasis on innovative new ways of getting blasted, have failed to do.

“I believe very strongly that there is a huge problem with public perception of marijuana users,” says McAlpine. “Even as it becomes legal. I knew it would be a big step to take on this new venture, but it is 100 percent for a cause I believe in, so that makes it all a lot easier to get up and put the hours in.”

There’s no question that it will take many muscles to change much of professional sports’ opinion on marijuana. But maybe we can start here. Call it a joint effort. *