Home Kiesza storms the pop scene at the Rickshaw Stop 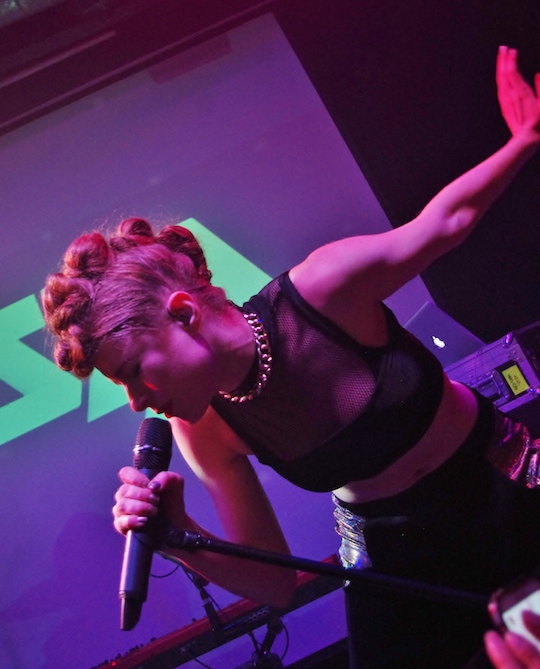 It’s entirely possible that Kiesza outgrew her gig at the Rickshaw Stop a few minutes after it was booked. Those in attendance at the Pop Scene-presented show were fortunate to see the singer, songwriter, and dancer from Calgary in such an intimate club venue on Thursday, Aug. 28, given the staggering rise that she’s in the midst of.

“Of all the places we’ve played — including Wembly Stadium — this has the biggest energy,” she said midway through her set. “Everybody told me this is probably where I belong.” The 25-year-old has already had a #1 single in the UK, among other European countries. Her video for “Hideway,” a single-shot dance routine made on a shoestring budget, has around 97 million views — and lately, it has been tacking on an additional one or two million per day.

If she’s scrambling to get her performance chops up to the level she’s reaching, it did not show on Thursday night. She and her backup dancers only slowed down when Kiesza sat down at a piano for a couple ballads. While she expressed concern about the condition of her voice prior to the show, it proved to be strong throughout the night, particularly when she sang Leonard Cohen’s “Hallelujah.” Halfway through it, she got up and finished the song over Mobb Deep’s “Shook Ones (Pt II)” beat, another prime example of the 90s aesthetic that has taken over popular culture. In this case, the odd juxtaposition worked. And so did her unironic cover of Haddaway’s “What Is Love?,” the first of the two ballads she played.

Before the show, we caught up with Kiesza to find out how she’s adapting to her newfound success and how she got to where she is.

Kiesza It’s sort of a tour mixed with promo-touring that has been mixed with finishing up the album. We’ve set an Oct. 21 release date, so it’s nice to have that finished. I’m going to NYC soon, [then] back to the UK for press…there’s a lot of back and forth between continents going on right now.

SFBG Dancing is an important part of your performance. How involved are you with choreography?

K I usually go searching for styles or dance moves that I like and bring them to my choreographer (Ljuba Castot) and say, “I really like this style, can we infuse it into what we’re doing?” Locking is one, there’s a few Bollywood moves that I’ve gotten into recently that I might try to sneak in. I like fusing different styles together and throwing them over different music that they’re not usually associated with. I work really, closely with my choreographer, though. We’ve known each other for three years now.

SFBG It sounds like you keep a close circle. Your brother shot the video for “Hideaway.“

K Well…if it ain’t broke, don’t fix it, you know? We’re a good team, very creative, we’ve all started from the bottom and now we’re rising together. It’s not like we’re closed to other people. There’s a lot of collaboration that goes on when we bring people into the nucleus.

SFBG You’ve got a real 1990s aesthetic to what you’re doing.

K I’m into that era right now. It was a great time for music, some of the best ballads were written around that time, some of the best dance music. It was all about the divas! And soul, R&B. Then there was David Foster, I think he wrote the most epic 90s ballads and he just called me up the other day! I went to his house for dinner and he was just the coolest person ever. We talked about writing together and I think it’s going to happen.

SFBG Do you have a grasp of what’s happening right now with your career?

K It’s strange. It’s been happening so quickly. In January, I was completely anonymous. Now, it seems like wherever I go, people recognize me. I’ve been working in the music industry for years but to have it blow up so quickly? I started as a writer so I haven’t even had a chance to develop the way that a lot of other artists have. Usually, it takes a bit longer to launch a career. So this one just exploded on me, but I’m very grateful for it. I feel like we’re almost catching up to the song. It’s just been let loose!

SFBG You tacked on an additional two million views between Tuesday and Wednesday.

SFBG Where are people into your music?

K It started in the UK. Then Germany. Finally Canada — which is a little funny. Someone wrote an article where they said that it’s hilarious that I went No. 1 in the UK and my country doesn’t even know about it. The next thing I know, Canada was all over it. So they’ve been really supportive, too and it’s amazing.

SFBG It sounds you struggled to find success as a writer in the music business. And then one day “Hideaway” came together almost as an afterthought.

K It kind of channeled itself, really. I was going to catch a plane to LA. from the studio. We were finished with the session we were working on and my producer was playing around with the synth (sings the first few chords of the song) and I loved it! That’s such a mysterious sound and the melody just popped into my head as I was about to leave. I turned around and asked him if I could lay something down, just really quickly. It wasn’t even a produced track, just a chord progression. And then I laid down pretty much the whole “Hideaway” melody. It just came out.

We were like, “Oh my gosh. . . this is really good! Let me write some lyrics!” I was rushing right through it because I was late for the plane. So I wrote them out and demo’d the lyrics and said to send it to me when I arrive. It was done by the time I got to the airport but I was so late that I couldn’t listen to it before I left. When I arrived in LA, I opened it up and the demo vocals sounded so good that we just kept it. We didn’t send it off to be mixed and mastered, he did it himself. That’s it. The whole thing, everything was done in 90 minutes from start to finish, even the production.

SFBG The video came together pretty organically as well, with you bringing together your network.

K The single shot was my producer Rami Samir Afuni’s idea. I knew that I wanted to do some street dancing and I went to Ljuba who said that she always wanted to try something like this. Rami’s sister Lianna and I went location scouting and we ended up finding this street we liked that captured graffiti art and the New York skyline. And then I called my brother and said, “Can you please film this for us?” He lives in Toronto, so the biggest expense was flying him from Toronto to New York. The rest of it involved rounding up friends to perform in it. My brother was the most professional person there!

SFBG And he paid the bills by working at weddings.

K Yeah, he’s a very proffesional cinemetographer, but that’s exactly it. Weddings paid the bills. But he’s so phenomenal at these wedding videos!

SFBG All he had to do was apply that skill to this project and he’s getting recognized for it.

K Right! Now he’s a go-to guy for music videos, or at least it definitely helped him.

SFBG What’s driving you? Do you have a dream gig?

K I’ve never thought about that. I just want to keep getting bigger and bigger, but the drive is to keep topping myself, to keep getting better. It’s a challenging show that we do. Singing live, dancing live. There’s no backing tracks and it seems like a lot of people sing over top of vocals to help with touring. Maybe I’m a purist, but I’m just like, “I won’t do it! I can’t do it!” I’d rather be out of tune than do that.

I work really hard, too. I’m always studying other artists. I’m kind of doing it all in the spotlight because it blew up so quickly. A lot of people develop off the stage or off the camera and then when it goes off, you’re seasoned. But with “Hideaway,” that was basically the first time I did the street dance. Ever. And now I’m really learning about that style of dance. I did ballet for years, so I was coordinated. I could pick up dance moves. But now I’m learning the movement, the style, the swag of all these other dances. It’s very different, but it’s fun. With all this creativity behind us, there really is no limit to how far we can go and what we can do.