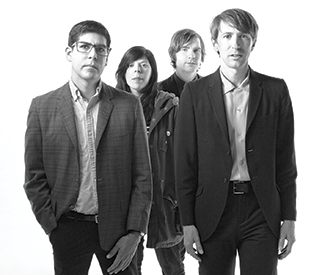 LEFT OF THE DIAL Musician Bart Davenport, Oakland native, LA resident, has one caveat for discussing his move two years ago. He might’ve broken a few hearts, but he wants to make it clear that he did not head for the southlands for the same reasons many fed-up, underfed Bay Area musicians are making the same trek these days.

“My story doesn’t have anything to do with the changes that have been happening in the Bay Area the past few years. And it really wasn’t a career move. It has to do with changes I needed to make happen within myself,” says the singer-songwriter-guitarist. “Besides, I don’t even stay away long enough to miss it — I’m up there at least once a month.”

Lucky for us, one of those trips will take place next weekend, when he helps kick off the Mission Creek Oakland Music & Arts Festival with a daylong block party Sept. 6. Davenport headlines an eclectic lineup of acts that also includes the psych-rock-folky sounds of The Blank Tapes, B. Hamilton, Foxtails Brigade, and more at this opener to the fifth incarnation of Oakland’s 10-day, 14-venue music fest, which began as an offshoot to San Francisco’s in 2009. (If there are any lingering questions about the East Bay’s music scene holding its own at this point, this is the kind of lineup that answers ’em.)

Davenport has had a pretty hectic touring schedule since his most recent LP, Physical World, dropped on Burger Records in March of this year. There were the adventures in Madrid, the opening slots for Echo & the Bunnymen at LA’s Orpheum Theatre. Last week, playing guitar in Marc & the Casuals, he co-hosted a special one-off soul music-comedy-storytelling night at The Chapel. The day after he plays the MCO Festival, he’ll be driving “like a madman” back to LA to catch a Burt Bacharach show (as an audience member). He’s gotten used to life on the road.

As a kid, though, he mostly moved back and forth between Berkeley and Oakland, where he grew up near Lake Merritt — across the street from the humble, Disneyland-inspiring wonder that is Children’s Fairyland, with its old-school talk boxes that have been narrating fairytales at the turn of a key since 1950. (He’s still enchanted by it, but — as this reporter has also discovered during some routine research — adults wanting to visit the park are required to bring a kid along.)

Nostalgia might seem to be an easy catch-all theme for someone prone to memories of kids’ amusement parks, especially someone whose most recent record conjures the synthy New Wave anthems of ’80s with almost eerie authenticity one moment, then veers backward toward Buddy Holly the next — with each song seemingly narrated by a different character named Bart Davenport, and all of it so shiny that you can never quite tell when he’s being tongue-in-cheek. Davenport’s known for clear changes in genre and sound from record to record, but the shift from 2008’s Palaces (a Harry Nilsson-esque affair with Kelley Stoltz’s fingerprints all over it) to the distinctly palm tree- and pink pollution sunset-scented Physical World (which is full of soul and jazz chord progressions, and where Davenport seems to be channeling, by turn, Hall & Oates, The Cars, New Order, and Morrisey) is probably his biggest departure yet.

The singer takes issue with critics who would simply call him “retro,” however — though it’s not because he finds the term offensive.

“And I don’t even think of myself as a very nostalgic person. I think of [my influences] more like shopping at the thrift store, and finding gems that you want to repurpose to say something new,” he adds. “It’s also that I guess many people try to avoid arrangements that sound like the way things were being done 20 or 30 years ago, and I tend to not really think about anything but what I like, what I think sounds good. It’s not about taking you to 1984 or taking you to right now, it’s about taking you into your own little world. The little world of that particular song, for just three minutes.”

Reticence to talk up LA in the Bay Area press aside, Davenport will allow that one of his major influences was his newly adopted city.

“It’s definitely an LA album,” he says, noting that about two-thirds of the record was written there, and it was recorded in Alhambra, near East LA. “I think the constant sunlight breeds a kind of optimism in people. Then there’s the scenery, the palm trees, the long crazy streets. The taco trucks. Where I live, the majority of people are Latino. It’s just a different mix.” Angeleno bassist Jessica Espeleto telling him she’d play in his band if he moved down south was one thing he had in mind, as well, before making the leap.

And yet: There’s no place like home? “The entire Bay Area has great venues,” says Davenport, as we discuss the new crop of venues that have sprung up in the East Bay over the last few years. “And yeah, especially with the musicians getting priced out of San Francisco, I think it’s great that there’s the whole East Bay for them to go to. Really, thank God for Oakland.”

With The Blank Tapes, B. Hamilton, many others