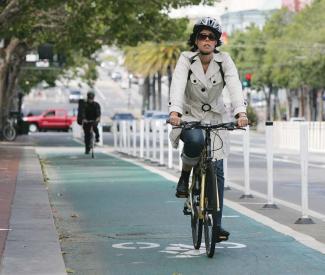 San Francisco-style cycletracks — bike lanes physically separated from automobile traffic — could proliferate in cities throughout California under a bill approved today [Fri/29] by the Legislature, provided Gov. Jerry Brown decides to sign it.

Assembly Bill 1193, the Protected Bikeways Act, by San Francisco Democrat Phil Ting, was approved today by the Assembly on a 53-15 vote after clearing the Senate on Monday, 29-5. The bill incorporates cycletrack design standards into state transportation regulations, which had previously stated that such designs weren’t allowed.

San Francisco pioneered the use of cycletracks anyway, borrowing the safety design for Europe, where they are common, and backing up that strategy with a willingness to defend the designs in court if need be. Since initially being placed on Market Street by then-Mayor Gavin Newsom’s administration, cycletracks have proliferated around the city.

“It’s huge, to be honest, even if it’s a little wonky,” California Bicycle Coalition David Snyder said of the legislation, which his group strongly backed. “The legal obstacles to putting in a cycletracks effectively prevented that type of bike lane from being installed in cities throughout California.”

Few cities were willing to buck the state on the issue, but Snyder believes there is a pent-up demand for cycletracks now that so many California cities have committed to improving their cycling infrastructure.

“The book said you couldn’t do it, and now the book will say you can do it, so all these cities will have another tool in their toolbelt,” Snyder said.

That is, if Gov. Brown signs it, something that cycling advocates are urging supporters to weigh in on before the Sept. 30 deadline to sign or reject legislation.