Home Ranks of opposition to 16th and Mission development grow as Plaza 16... 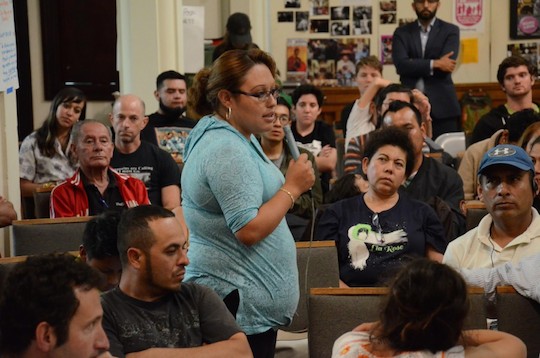 In the sea of nonprofit leaders, career organizers, and rabblerousers, one old man put the Mission’s struggle into context, last night [Thu/28]. It was a majority Latino district even as recently as the ’90s, he told the crowd gathered in St. John’s Episcopal Church last night. But now: “Here in the Mission, I can count the Latinos on my hands.”

The stakes are high as the Plaza 16 coalition raised its concerns about a proposed housing project that would tower over the BART plaza at 16th and Mission last night, with representatives from nonprofits and other organizations around the city gathering to seek more community support for the struggle.

The 10-story residential behemoth proposed by Maximus Real Estate Partners is hotly contested. Organizers of Plaza 16  (so named for the plaza across from the development at 16th and Mission), say the development has only 42 proposed affordable housing units which would be built on site, and those aren’t even a sure thing. The rent for the rest of the building’s units range between $3,500 to $5,000 a month. Gabriel Medina, policy manager of the Mission Economic Development Agency, stated the obvious: That’s a price most current Mission residents can’t afford.

“Does that sound like units for the Mission community?” Medina asked the crowd. “No!” they shouted in reply.

Of course, the development isn’t meant for Mission residents, but for the incoming wave of upper middle class workers who can afford $42,000 a year in rent. But that sticker shock is only part of the problem.

Many supply-side housing development advocates argue San Francisco needs to build, build, build in order to offer enough housing supply to bring rental prices down (a theory many progressives disagree with). But last night, the focus was on exactly what type of construction the city is encouraging, and how that will hurt the Mission in the short term.

“I was born and raised here on 16th and Mission,” Elsa Ramos, 23, told the crowd, microphone in hand. “There’s no way for us to have another space. We’re a family of nine now, I just saw the birth of my first niece.”

Ramos is worried the Maximus development would drive up the price of her family’s unit, or lead to their eviction. When speaking with the Guardian, Ramos said her father has diabetes, and depends on city services for his healthcare. Her siblings all depend on city aid as well. Ramos’ fears were echoed by representatives of the nonprofits present, but scaled to the entire neighborhood.

“If everyone is evicted, we’re going to lose our client base,” Maria Zamudio, an organizer from Causa Justa/Just Cause, told the crowd. “We will not have clients to provide safety nets for. There will be no communities of color.”

Some of the nonprofit representatives present expressed concern with Plaza 16’s plan. “You can’t just show them you’re opposed,” one man said. “You have to show them your vision.”

Plaza 16 representatives said they want to see the Maximus project abandoned entirely. Some executives from Maximus were involved with predatory lending schemes, they allege. They also allege Maximus executives were partly responsible for the Parkmerced debacle, where many rent-controlled units were seemingly lost, the subject of a controversial court case. Maximus representatives didn’t return a Guardian call for comment.

Though there was some dissent, ultimately the nonprofits gathered expressed unified support. The spectre of forcing longtime local residents into suburban ghettos lingered over the discussion.

“Ferguson is [an example of] suburbanized poverty and segregation,” Medina told the Guardian. It’s one thing living in a low-income community in a city, he said, where nonprofits can lend aid like tutoring, shelters, free food or legal services. But like Ferguson, the suburban ghettos of the Bay Area often lack those safety nets, he said.

It seems the nonprofits present got the point, as over 15 new organizations joined the Plaza 16 coalition last night.

Midway through the meeting, Zamudio handed out cards to each of the nonprofit representatives present. A red card meant the organization would now support the fight against Maximus, an orange card would signify a need to stay neutral, a green card meant Maximus support, and a yellow card would signal an undecided vote.

When asked who was in support of the coalition, a sea of hands with red cards raised up high.

“They say it’s a gold rush. This isn’t a gold rush,” Carlos Gutierrez from HOMEY told the crowd. “This is where people live, these are people’s homes.”