Home Predicting earthquakes, from 14-year-old prophets to train-stopping ShakeAlerts to lessons from disaster... 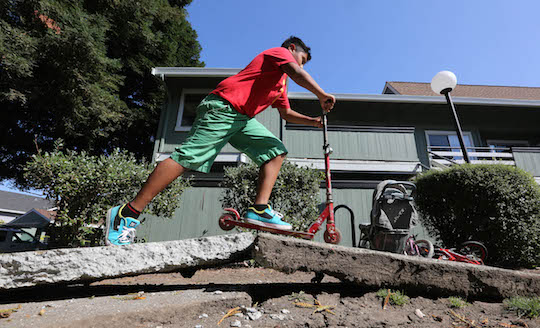 Earlier today, I called my mother, a natural disaster film junkie, and asked her, “Do you know of any movies where someone predicts natural disasters, but no one believes the guy, and so everything goes a little haywire?”

“10.5, Day After Tomorrow, 2012, Volcano, Deep Impact, and Knowing,” she replied without any hesitation. “But in Knowing the protagonist gets help from aliens to predict disasters, so I don’t know if that’s bordering on fiction.”

Despite the hundreds of natural disaster blockbusters warning the public to listen when someone predicts catastrophe, earthquake prediction technology can’t defeat the rules of physics and the unpredictable nature of shaking earth. When a 14-year-old from Florida claims he predicted the recent Napa earthquake, for instance, doubts are raised, heads were tilted, and facts must be checked at once.

“I started jumping up and down when I heard about the earthquake,” high school student Sugganth Kannan told us.

Kannan was sad about the destruction, sure, but he also thought the earthquake’s timing, location, and magnitude validated his prediction that an earthquake with a magnitude of at least 5.0 would occur 50 miles from the South Napa location within 180 days from last December when he made the prediction. So, he was close, but off by a few months.

To make his prediction, Kannan used the Spatial Connect Theory, which states that all earthquakes within a fault zone are related. Then, looking at past earthquakes, he made functions based on the angle of change, geographical difference, and the time between earthquakes to eventually come up with a pattern. His work has been published in the Journal of Geology & Geosciences.

Of course, earthquakes in California are both as no-kidding-predictable as they are scientifically unpredictable. According to the US Geological Survey, which cites studies examining the past 14,000 years, catastrophic earthquakes strike along the southern San Andreas fault about once every 150 years. And if you don’t believe the US Geological Survey, there’s always Lt. Gov. Gavin Newsom, who has stated, “There’s a real likelihood of a major, major earthquake in the next 10, 15, 20 years.” We’re seismically active, and we know it.

While 14-year-old Kannan and the lieutenant governor might want futures as earthquake prophets, Richard Allen, director of the Berkeley Seismological Laboratory, is just happy he can predict earthquakes within 10 seconds of their first furious rumble. He helped pioneer an early warning system called ShakeAlerts that’s currently got 150 subscribers and does just that.

Now there’s an idea for a natural disaster movie: Nicholas Cage predicts an earthquake a whopping 10 seconds before the disaster happens, causing BART trains to automatically come to dramatic, adrenaline-rushing halt, saving thousands of lives! It might not be fodder for disaster movies, but it is good news for actual and real world of real and actual earthquakes.

BART is one of Shake Alert’s users. When the Napa earthquake went off, an alarm went off at BART’s offices announcing an approaching earthquake. Spokesperson John McPartland explained at a press conference on Monday that the trains moving at 33 MPH or less would have stopped had they experienced a a 3.1 earthquake or higher. But in the Bay Area, the magnitude was much smaller, and the trains raced on, unknowing.

“If there’s an earthquake, and you’re on BART, the best thing you can ask for is for the train to stop,” said Allen. You can check out a video for CISN ShakeAlert here. In the video, you can hear buzzing, and then a somewhat intense robotic voice telling you, “Earthquake! Earthquake! Light shaking expected in 10 seconds. Earthquake!”

“The farther away from the earthquake, the sooner you’ll get the alert,” Allen told the Guardian. “In the best case scenario — as in, the worst case scenario earthquake — you’ll get up to a minute warning. For this one, BART got 10 seconds. There’s no way to improve that. It’s physics.”

He hopes to get more funding to bring ShakeAlert to more people, and to one day develop a mobile app so anyone can be alerted seconds before an earthquake occurs. Ten seconds might not sound like a lot of time, but for those knitting with dangerous needles, or cooking with sharp knives, or just generally doing things not conducive to huge earthquakes with large, pointy things, 10 seconds could mean a whole lot. Although California Gov. Jerry Brown signed a law to turn Shake Alert into a statewide program last fall, the project has only received $10 million of the $80 million it needs for new sensors and infrastructure.

Then there’s virtual reality. Michael Oskin, a professor of earth and planetary sciences who studies earthquakes and seismicity at UC Davis, has taken his students to the site of the Napa earthquake to take photographs of the destruction and use the photographs to build 3D models to help them understand the wrath of the quake and what could come next.  At UC Davis’ W. M. Keck Center for Active Visualization in Earth Sciences (KeckCAVES), researchers get to experience earthquakes virtually and take heed.

Much of Oskin’s work with virtual reality assimilation revolves around looking at earthquakes before and after they’ve occurred, examining the fault lines throughout these phases, and studying how the faults have moved afterwards.

“If you want to understand the record of faulting, you look at earthquakes that have just happened to see how complicated they are and how they’ve changed. Then you get a better sense of how to interpret them,” Oskin said. From there, he can also create a virtual world to provide a visual of what could happen to houses built along fault lines.

“Hopefully in 20 years, the tools will be available for everyone to use – on laptops and 3D TV screens so you can visualize an earthquake on a screen in 3D,” Oskin said. “It’s not high end software. It’s just creative programming.”

“What we do is we count smaller earthquakes to forecast bigger earthquakes,” Rundle explained. “Once a magnitude 6 earthquake occurs, like the one in Napa, we start counting the number of small earthquakes that occur in the region after that. Once we get 1000 earthquakes with a magnitude of 5, it’s time for another 6 to occur. We convert that statement into a probability around the world, every night, and display it on the website.”

Rundle said his system has a 80-85 percent accuracy rate.  “If you were to make a whole bunch of random forecasts today, and you were to do that tomorrow and the next day and then compare the forecasts we use, Open Hazard would be better 80-85 percent of the time,” he explained. “That’s roughly equivalent to a weather forecast three or four days into the future. That’s where our accuracy is.”

Back in 2012, an Italian judge convicted seven scientific experts of manslaughter and sentenced them to six years in prison for failing to give warning before the April 2009 earthquake that killed over 300 people. But that’s why earthquake forecasting is called forecasting, and not predicting. Fortune tellers may not be trusted, but you can’t kill the weatherman, especially over quakes.