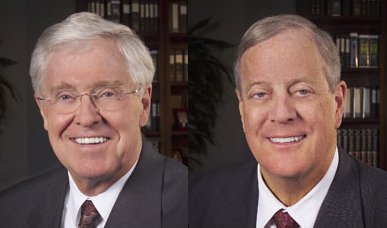 In recent months, San Francisco and Oakland have unveiled ballot measures that would raise minimum wage for workers currently struggling with the Bay Area’s rising cost of living. But as November draws closer, a network of right-wing organizations — with ties to the infamous Koch brothers — have been funding campaigns aimed at convincing workers that low wages are actually better for their livelihoods.

“Two of the richest men in the world are spending millions to hold down low-wage workers and that is just immoral,” said Roxanne Sanchez, President of Service Employee International Union Local 1021, who organized Raise the Bay, a series of efforts to raise minimum wage in cities around the Bay Area.

SEIU leaders and local journalists have chided the Koch brothers and their right-wing ilk for funding campaigns aimed at dissuading the public from voting on higher minimum wages in the area. The Koch brothers are heirs to an oil fortune and are notorious for influencing national and state politics through so called “dark money” groups, which are not obligated to disclose financial information, including their donors.

An initial $200,000 campaign was launched by the Charles Koch Foundation in July. A well-produced advertisement, which ran in Wichita, Kansas, asserts that people earning $34,000 are already on the “road to economic freedom.” Charles Koch later told the Wichita Eagle newspaper that minimum wage is an obstacle preventing workers on limited income from “rising up.”

In the Bay Area, conservative media outlet CalWatchDog — which is funded by a group of right-wing investors, including the Koch Brothers — criticized Oakland politicians for voting down a diluted alternative to Oakland’s primary minimum wage initiative, Raise Up Oakland. CalWatchDog claimed the local leaders’ decisions were largely influenced by labor union contributions, which was later proven to be a case of political chicanery.

In San Francisco, income inequality is growing at an alarming rate, and San Francisco’s ballot initiative hopes to help workers survive in the changing economic landscape.

And leaders of SEIU Local 1021 say they will continue to challenge the Koch brothers and their campaigns to thwart Bay Area wage increases. “The Koch Brothers might be billionaires, but they don’t have enough money to hold us back,” said Pete Castelli, executive director of Local 1021. “We challenge them to crawl out from under their rock, shine a light on their plans, and publicly debate workers about raising the minimum wage.”