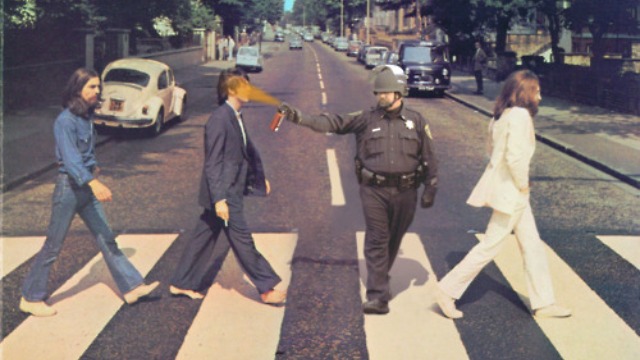 Nearly three years after UC Davis campus police pepper sprayed a line of peaceful, seated student protesters from the Occupy movement, The Sacramento Bee has won a legal battle to release the names of officers involved, the newspaper reported today.

Though the notorious campus police officer Lt. John Pike has long been identified (and turned into countless hilarious internet memes), there were other officers who took action that day. A review of the viral video of the incident shows additional officers pepper spraying student protesters, and carrying them away from their seated positions like sacks of potatoes.

These officers were the subject of an independent report into the incident conducted by former state Supreme Court Justice Cruz Reynoso, which was released to the public in 2012. But the names of involved officers were redacted, and the Federated University Police Officers Association went to court saying those names should be shielded. The Bee filed suit for the names, and was later joined in court by the Los Angeles Times in a legal tussle that lasted two years.

“The University of California Office of the President commissioned and paid for the Reynoso Report with the intent to make it public,” spokesman Steve Montiel said in a statement, according to the Bee. “We attempted to publish the full, unredacted report in March 2012, and the campus police officers’ union brought a lawsuit to keep us from doing so.”

The police union may have had some reason to worry, as officer Pike, 40, claimed in a workers’ compensation suit that he suffered anxiety and depression, as well as death threats. He eventually won a $38,000 settlement, but perhaps he and the other officers should have considered the fallout of spraying peaceful protesters directly in the face beforehand.

The win was handed down Wednesday night, as the police union’s appeal to protect the officers’ names was dismissed by the state Supreme Court. The court is expected to release the names of the involved officers sometime tonight, according to the Bee.

And one last pepper spray meme, because we couldn’t resist: