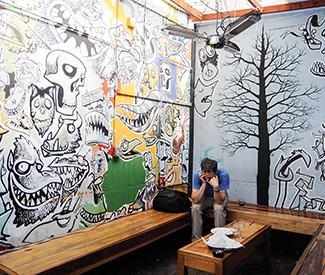 THE WEEKNIGHTER “This place sucks now. I mean what the fuck is going on in SF?” Chloe was visiting from either Portland or LA or wherever it was she was living that wasn’t San Francisco anymore. A few of us were sitting around, drinking in the 4pm light at the front window of The Sycamore (2140 Mission, SF. www.thesycamoresf.com). A handful of folks had come out to see Chloe since she was just around for a couple days and as usual when you don’t see someone for awhile, it became a “remember when…” conversation.

“I think San Francisco is better off since the Arrow Bar closed down,” I was telling Richie Panic. “Yeah,” he responded, “you didn’t hang out at the Arrow Bar, you did time there.” In the early and mid 2000s The Arrow Bar was the ultimate hipster den of vice and many of the people around the table had all met each other there and somehow survived. Considering the bar had been on Sixth Street near Market, someone at the table made a joke about more blow being done in the bar than crack being smoked outside it, to which we all laughed. It was probably true.

Somebody got up for another round of drinks. Since The Sycamore only has wine and beer he brought back a clutch of Miller High Lifes and we resumed the game of Cards Against Humanity that we weren’t really playing. The Sycamore is perfect for this kind of afternoon. Art lines the walls and beer handles that aren’t being used at the moment hang from the ceiling. Board games are conspicuously stacked so that anyone can play them and a jukebox is stuffed with all the right tunes. It’s good for place to while away an afternoon with friends and watch the wackjobs of Mission Street putter by at a laconic pace.

“Have you been over there lately?” I asked Chloe, bringing the conversation back to The Arrow Bar. “I mean, they’ve by no means cleaned it up, but it is actually getting slightly better.”

“Ha! Could you imagine that?” she laughed. “How many seismic cultural twists would San Francisco have to go through to see a cleaned-up Sixth Street? The day Sixth Street isn’t the shadiest street ever is the day San Francisco is officially dead.” She had a point.

I headed to the bathroom and along the way saw one of my stickers on the water cooler. I didn’t know if I’d put it there or if someone else had. It’s often hard to remember details about the last time you were in a bar. When I got back to the table I was excited to see that the magic trick had worked again. You know the magic trick: It’s when you come back to the table and the food that you’d ordered earlier is miraculously there. We all dived into the fries, sliders, and pork belly doughnuts like the drunk people we were.

After eating and drinking some more, people began to head off in their own directions on whatever adventure their day-drinking would lead them on. I said bye to whomever was still left and gave Chloe a hug. “It’s really weird,” she said. “I basically grew up here, and it’s like every time I come back to visit, it’s so drastically different that I barely recognize it.”

I walked out Sycamore’s door, turned around, and did my best Humphrey Bogart, “At least we’ll always have Sixth Street.” And then I went home.