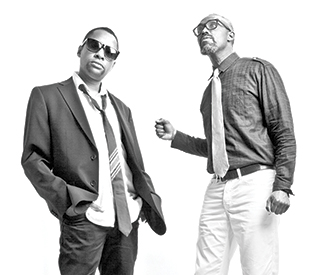 LEFT OF THE DIAL It’s a common refrain among the bundled, peacoat- and scarf-sporting masses around this time of year that San Francisco doesn’t really have a summer. But those of us who’ve been here a while know this isn’t exactly accurate: Summer just kinda takes place during fall. If seasons were party guests, San Francisco’s summer would be the guy who shows up at 2am, bearing a bottle of good tequila, ready to dance. Unless you’re college-aged or younger and have to go back to school just as the weather turns toasty, only to stare longingly out the classroom window imagining the fun you could be having — my apologies, I’ve been there — there’s something really special, almost secretive-feeling about a warm September late afternoon.

On Saturday, Aug. 23, consider the 20th Street Block Party, brought to you by Noise Pop, to be your gateway — a kickoff, really — to “real summer.” This free annual shindig, now in its second year, will see a mighty fine lineup of local bands (ones that don’t usually play for free, like Rogue Wave, Cayucas, Melted Toys, The Bilinda Butchers, etc.) entertaining all afternoon long, while food from the veritable gourmet wonderland that has sprung up on 20th street in the Mission will be available in wallet-friendly, portable portions. What more you could ask for?

Among the acts we’re most excited for is Myron & E, a soul duo that’s had a pretty big year. After the release of Broadway last year — a 10-track powerhouse of a debut, featuring warm, plaintive vocals dancing the line between neo-soul and R&B from both singers, the Soul Investigators as a backing band, and the overwhelming sense of having arrived in a time machine from another era — the two have gotten used to life on the road during a whirlwind of touring, making fans in some surprising places. Russia, in particular, went well recently, says Eric “E da boss” Cooke.

Still, “[The record’s] been a slow-burner, a lot of people are just finding out about it. Which is great, it still has momentum, people are still discovering us,” says E, a New Jersey native known for his gargantuan record collection, who’s been producing hip-hop records in the Bay for nearly a decade and a half now — alongside DJ Nick Andre, he’s known in the Bay as the producer of more than a dozen on the Slept On label. E also doubles as a member of the Oakland independent hip-hop royal family Blackalicious; members of which guested on his underground 2007 hit, “Go Left,” while signed to the SF-based Om label.

When label heads there were interested in a follow-up using instrumentals instead of samples, he reached out to the Soul Investigators; they asked him to sing on one of their songs in return. E reached out to Myron (Glasper), a dancer-turned-singer who came up in LA (he cut his teeth dancing on In Living Color), another sometime member of Blackalicious, to join him on the track. Something clicked. Broadway had the sound of instant, organic hit when it dropped last summer on Stone’s Throw records, with disco basslines, bright horns, and classic soul grooves for days, anchored by the pair’s call-and-response vocals, which are by turns seductive, goofy, unconcerned with being perfect but somehow, simultaneously, almost too smooth. These are party starters, these are roller disco anthems, these are love ballads; they are everything in between. The live instrumentation gives the tunes an organic sensibility that’s (unfortunately) all too rare in soul/hip-hop hybrids as of late. Whatever the reason, you honestly can’t help but dance.

“Sometimes we write together, sometimes we write separately and come together after,” says E. As for how their relationship’s evolved after the last year of nearly non-stop touring together? Do they ever butt heads while writing?

“That’s maybe the only time we don’t butt heads,” says E with a laugh. “No, we have a certain chemistry. And, you know, we’re having fun. It just works.”

As for the rest of the year, E says they hope to get back into the studio to start working on a follow-up by December. Until then, we’d recommend taking advantage of any chance to see ’em you get.

1pm on the main stage

Oh, and food-wise? The workshop tent demands that you come both hungry and ready to learn. Maybe it’s because Chino’s bite-size, savory broth-filled soup dumplings have been haunting our dreams lately (in a delicious way), but we especially can’t stop looking at the workshop called “Dumplings with Brandon Jew.” He had us at “cooking secrets” and “techniques of dumpling creation.” That’s at 2:30pm in the Workshop Tent. Education never tasted so good.