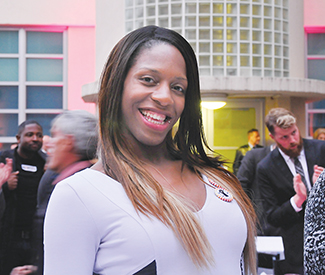 For 38 years, the Harvey Milk LGBT Democratic Club has celebrated queer progressive politics in San Francisco with its annual Dinner and Gayla, held this year at the Mission campus of the endangered City College of San Francisco.

A slew of awards went out to commemorate the contributions of elected officials and advocates who went to battle to save City College from losing its accreditation, a fate that would bring the college’s 79-year history to a grinding halt while leaving 90,000 students in the lurch with few other options. Activists from San Francisco’s Housing Rights Committee also won accolades for organizing to defend long-term tenants from eviction.

The evening’s keynote speaker and guest of honor was CeCe McDonald, a transgender African American woman who served a 17-month prison term for what she’s described as an act of self-defense in response to a transphobic attack. She was with friends in Minneapolis in July 2011 when an attacker made racist and homophobic comments and then assaulted her; in the end, he was fatally stabbed with her pair of scissors.

A campaign clamoring for McDonald’s freedom drew nationwide attention as supporters rallied in her defense, saying she shouldn’t have been incarcerated for surviving a hate crime. Her story is now the subject of a documentary that’s being co-produced by actress Laverne Cox, who portrays an incarcerated trans woman in Orange is the New Black.

“I never thought I would make it past the age of 16, and to know that I’m here, 10 years later, really means a lot to me,” she said. “It’s really important for me to have a voice. There is a revolution brewing, and I’m so glad that I’m a part of it. … For me, I’ve been through so much, and I would never regret one part of it, because it made me a stronger person. It made me realize that I’m worth something. It made me realize I’m put on this planet for a reason. Nothing is ever going to take that away from me. I swear I’m going to fight the fight to the end.”