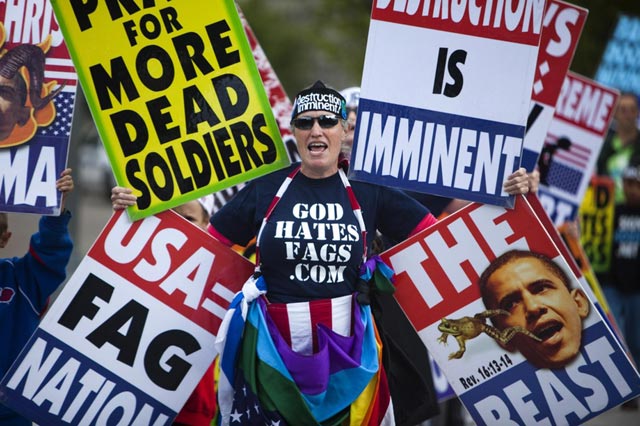 In case you don’t stay tuned to the comings and goings of the fearful, hate-filled, how-is-this-a-real-thing-and-not-a-caricature-of-extreme-right-wing-lunacy shitshow that is the Westboro Baptist Church, your favorite homophobic nut jobs are in the Bay Area today to protest outside several tech companies, including Facebook, Google, Twitter, and more.

Why, you ask? Because of God. Because, according to the WBC, apparently riffing on the widespread success of hating “fags,” Jews, Muslims, and Obama, God has decided to also hate the media. Yes, that’s a new website for the WBC, one which details God’s fury toward the likes of Mark Zuckerberg (“a fag enabler, and a little cry baby in many respects”), Betty White (“famous for being an old whore”), Mother Jones (“Why not investigate your hatred of God?”), and Johnny Depp (a “proud adulterer” who — even worse — moved to France for a while).

But buried in the inner workings of this treasure trove of hate-mongering and Web 2.0 aesthetics is the real gem: The music. The Westboro Baptist Church is apparently employing people — or perhaps they’re volunteers? — to cover songs by current pop stars, with all the words changed to be about how God hates everyone. From a few listens, this does not seem to be just one dude sitting in his parents’ basement with ProTools for an hour before heading out to the latest picketing of a soldier’s funeral, either. Someone or a group of someones put a lot of effort into these things.

Sample lyric, from the bridge of their parody of Lorde’s “Royals”:

Cuz every song you sing’s bare-teeth, ragin, sinnin’ in the bedroom / Bloodlust, scoffin’, trashin’ your Creator / You don’t care; you’re really bad-asses in your dreams /But in reality Christ will payback, comin’ in the clouds He’ll / set His throne, then mockers will be screeching /”It ain’t fair!”… we’ll be caught up with Him in the air.

Because the audio player on their website is a little wonky (Internet technology in general: barely tolerated by God?), let’s listen to a few of these ditties right here, shall we? Oh, and if you want to catch these fine folks at their protests today, there’s still time to catch them outside the headquarters of the demonic End of Times symbols known as Pinterest and Reddit.

And here’s Rihanna and Eminem, if they were both vengeful, science-hating lunatics:

And there are plenty more where that came from. Including the Beatles, and Bob Dylan. I had to hit stop on the Beatles ones within 30 seconds. Look around at your own risk? I’m sorry.