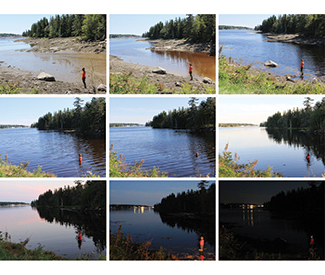 THEATER Sarah Cameron Sunde will be standing in the water at Aquatic Park this Friday. She’ll stand from low tide, at 9:26 that morning, through high tide at 4:09 in the afternoon, and back to low tide again at 10:31 that night. Thirteen hours and five minutes of being still, while everything around her changes.

When it comes to the near and distant impacts in store from sea level rise brought on by the planet’s changing climate, Bay Area residents might be expected to know more than most. The bay’s distinctive shape is already being modified by creeping water levels. New efforts at shoreline protection are underway, but with an expected rise of six feet by the end of the century, the bay and San Francisco are destined to be different places no matter what.

How conscious we are of that fact remains a question. It’s one thing to know the figures and another to “feel the rise,” as Sunde puts it in her invitation to locals. For the New York–based theater director and interdisciplinary artist, the awesome movement of the daily tide shift acts as a visceral metaphor for larger cycles, and momentous changes afoot. Even those who choose to watch from the shore might grasp something of this larger theme, tucked into an ephemeral moment, merely by registering the bay’s embrace of a human tidal gauge.

That, anyway, is Sunde’s hope as she embarks on the third iteration of her 36.5 Water Project. The venture began last August in Maine, while Sunde was at an artist residency near Bass Harbor. But its roots go back a little further, to 2012 and Hurricane Sandy.

“When Hurricane Sandy hit New York,” she says, “it was the first time I truly, deeply understood that everything is temporary.” This despite being married to a water engineer from the Netherlands, whose first impression of New York City was tantamount to a liver specialist encountering Dean Martin. “And I didn’t believe him,” she admits. “Then [the hurricane] hit, and I understood. It changed the way I think about these things.” Sunde realized there was a real and dangerous deficit in long-term vision. “We know how to rally after a disaster but there’s no forward, future thinking.”

Sunde — whose theatrical work has largely revolved around her position as deputy artistic director of New York’s New Georges theater company, as well as her role as the foremost American translator and director of the famed contemporary Norwegian playwright Jon Fosse — was at that time also moving away from new play development toward her roots in more experimental, devised performance-making with a group of interdisciplinary collaborators collectively known as Lydian Junction. Its experiments, informed in part by the writing of Norwegian writer Knut Hamsun and by issues of sustainability in the arts, explore art’s relation to suffering and sacrifice.

“In Maine, I was thinking about all these things. I was thinking about New York sinking. I was thinking about art and sacrifice and suffering, sustainability. And I was on this bay, this tidal bay, where there is a ten-and-a-half foot tidal shift. That meant that it was a mudflat during low tide, and then during high tide it was a bay, a full-on bay of water. I had never seen the environment change so drastically with the tide before. I was watching this huge rock out in the bay get swallowed. There was something really beautiful about this.”

Suddenly, an image came to her director’s eye.

“I thought, I see a human being standing there up to the neck, and then the water going back down again. I thought, I have to do this. How can I create this spectacle? I thought about my collaborators and I thought, shit, they’re not going to do it; I guess I’m going to have to do it myself. I decided to do it three days later because it was my half birthday — I always try to do something that is related to my own tracking of time. I’m a little obsessed with time, the expansion, the contraction of it, the perception, all of it, the routine, the anti-routine. That’s why it’s called 36.5, because I turned 36 and a half that day.”

Since then, Sunde has developed some more thinking around the shape of her piece and its intentionally simple design. She plans to travel to six continents, drawn to places with some personal connection. (Having grown up in Palo Alto, Sunde has roots in the Bay Area that run especially deep.) Each iteration will involve specific local partnerships. Aptly enough, the after party for Friday’s performance takes place at the Long Now Foundation at nearby Fort Mason. And the number in the title ends up being significant in several ways: The average person needs 36.5 cubic meters of water a year; at the current rate of climate change, oceans could rise 36.5 inches by the century’s end; and ditching the decimal point leaves the number of days in a year. The connotations underscore the way the personal and universal remain deeply entwined here.

The invitation to the public to test the waters with her, meanwhile, adds a new wrinkle in this globetrotting project, granting space for direct participation in the experience. At the same time, it means the performance becomes a collective action, however peripheral or absurd it may appear on the surface. Small steps just might sound greater depths. *