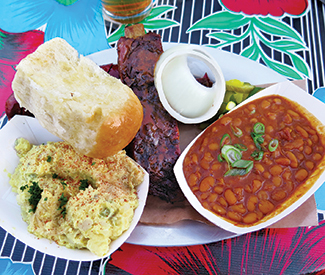 TABLEHOPPER After lamenting for too long that we didn’t have enough quality barbecue options around the bay, now we have plenty to check out. Here’s your cheat sheet on three recently opened barbecue spots, all of them using sustainable and well-sourced meats, because that’s how we roll.

The former Brother-in-Law’s on Divisadero, which featured one of the area’s few remaining wood-fired barbecue pits, has been transformed under the tender care of Ryan and Cesalee Farr. Ryan Farr is well known around town for his chicharrones (and now there are kettle-cooked old fashioned chicharrones too), their butcher shop, and his “Best Damn Cheeseburger” at many farmers markets (including the one at the Ferry Building Marketplace). Now Farr has his own barbecue spot, with a couple of Southern Pride smokers inside, cranking out some incredibly delicious meats, including my hands-down favorite, the pork spare ribs. You can get a plate with one, two, or three meats ($12–$20), which comes with two sides (like excellent baked beans, potato salad, cole slaw, and the “frankaroni,” which is fried mac and cheese with 4505 hot dogs inside, dear lord), pickles, sliced onion, and a Parker House roll. Meats include a stellar brisket, smoky pulled chicken, hot or mild sausage, and juicy pork shoulder. There are also some salads (like a Cobb with big chunks of bacon), sandwiches, that cheeseburger, and beer and wine on tap.

Kick it on the big patio at picnic tables, or take it to go (you can even take a six-pack of beer or a bottle of wine to go). Coming soon: big changes on the patio, and a late-night window where you’ll be able to get cheeseburgers on the weekends! 4505 is open for lunch, so take advantage on a sunny day. Open Sun–Thu, 10:30am–10pm, Fri–Sat, 10:30am–11pm.

Dave McLean of Magnolia has completed his massive dream project in the Dogpatch, which includes his gleaming new brewery and Smokestack, a barbecue joint and bar. Dennis Lee of Namu Gaji is overseeing the barbecue, a rotating selection of meats like Texas-style Piedmontese-certified beef (read: it’s special), sausages, seafood (interesting!), and some really good pork sticks. One night a side of spicy kale (instead of collards) hit the mark. Parker House rolls, check. The place is still working out some kinks (items tend to run out, and the high prices make expectations also run high), but I look forward to it developing in time. You have an extensive selection of Magnolia brews (plus guest brews, and cask beers) to enjoy, and plenty of whiskey-based cocktails.

It can be a little confusing when you get there: Yes, the place with no sign and all the newspaper on the windows is where you want to be. You’ll order at the meat counter and then find a place to sit at the communal tables, but if you want something to drink, you’ll order at the bar. Go with three people so you can manage it all.

Big news: Smokestack is now open for lunch, so you can come by from 11:30am–midnight to get your meats on, and the bar is open until 2am Thu–Sat.

Anyone who even remotely loves beer needs to head to this Berkeley spot (Chuck Stilphen of the Trappist and Mikkeller Bar is behind it, with 43 domestic beers on tap), and chef Michael O’Brien is doing some quality dry-rubbed meats (standouts include the notable hot links, St. Louis pork ribs, and Mary’s chicken). Choose one or two meats ($13–$18) and two sides, like their cheesy mac and cheese and fantastic cowboy beans. It’s plenty spacious inside, but the outdoor courtyard means you can enjoy the usually-balmy 510 weather. Hours have expanded and are now Mon–Thu, 5pm–midnight; Fri, 5pm–1am; Sat, noon–1am; Sun, noon–midnight. *