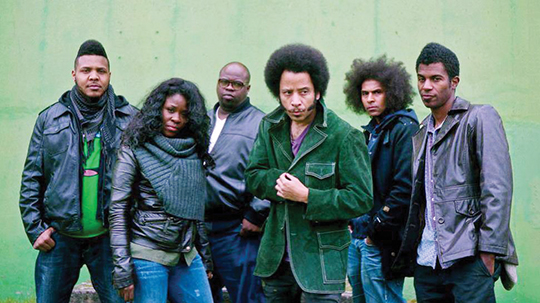 While still a child in early-’80s San Francisco, Boots Riley witnessed something he didn’t quite understand but that would stick with him for the rest of his life. Walking into a theater performance at the venerable Mission District art space Project Artaud, Riley saw actors in body paint writhing around him in apparent agony on all sides. It was meant as a simulation of the AIDS epidemic, with the actors portraying the afflicted. But it didn’t enlighten him much as a kid.

“It just scared the hell out of me,” Riley recalls. “You walk into this place, and it’s like a whole city, with people all around you.”

Given how Riley’s own work with long-running hip-hop group The Coup likewise mixes political activism with overwhelming performance energy, it’s fitting he would look back on this experience as the inspiration for The Coup’s new multimedia project, Shadowbox. Featuring the work of street artist Jon-Paul Bail, videographer David Szlasa, and a host of other bands and performers, Shadowbox casts the Coup’s music in the context of an all-encompassing artwork that attacks the audience from all sides. He’s debuting the project at the Yerba Buena Center for the Arts on Aug. 16, but he hopes to eventually take it on the road to wherever an art establishment is willing to fund it.

Riley prefers to remain secretive about what the performance actually entails. He’s described it in the past as featuring puppets, drones and “Guantanamo Bay go-go dancers,” whatever those may be. To Riley, having the audience come in blind is key to maximizing the impact of the show.

“Some of the things that would make people probably want to come to the performance are things I don’t want to talk about before they happen,” Riley says.

What we do know is that it’ll feature multiple stages and a dizzying roster of collaborators, from socialist hip-hop militants Dead Prez to dream-pop duo Snow Angel, comedian W. Kamau Bell, chamber orchestra Classical Revolution, and the New Orleans-style second line unit Extra Action Marching Band. All of it will be encased by Bail’s black-and-white artwork, which will give the audience the impression of being in an actual “box of shadows.”

Bail, a Bay Area street artist perhaps best known as of late for his “Hella Occupy Oakland” poster, was one of Riley’s early heroes on the Bay Area art scene. The two met in the late ’80s amid a wave of neo-Nazi skinhead activity in the Bay Area, which the two of them helped fight to counter.

“When I was in high school I would hang out at Alameda Beach,” Riley recalls. “Back then Alameda was still a navy town and they didn’t like a lot of black folks coming around. Police rolled up to harass us, and the police insignia on the car was covered in a swastika. The first thing I thought was: ‘Who the fuck did that?'”

It turned out to be Bail, and the two artists quickly bonded, putting up anti-Nazi posters around the city. They’ve remained friends through the years, but they haven’t collaborated on a large-scale project until now.

“He was the first artist I ever met who was trying to do something more with art than just make art,” Riley says. “He had a collective at California College of the Arts at the time, which had the slogan — ‘no art for art’s sake.'”

The Yerba Buena Arts Center connected Riley and Bail with videographer (and Theater Artaud collaborator) David Szlasa, who helped design the video elements of the project. Together, they form Shadowbox’s core creative axis, responsible for the aesthetically overwhelming experience Riley hopes the project will be.

Though Shadowbox contains elements of both a gallery exhibition and a theatrical performance, Riley ultimately hopes that Shadowbox will feel more like a show than anything else, in line with the Coup’s high-octane concerts.

“A lot of the time when you’re doing something theatrical people just want to stand around,” Riley says. “But our shows have always been known to be a dance party, and we’re keeping the audience with us and not just watching us.”

The performers and artworks are intended to surround an audience, which will be able to move around and examine the exhibit at first. But as the room fills, Riley hopes the crowd will solidify and focus on the music. The musical element of Shadowbox will mostly consist of Coup songs, but each of the additional musical performers will play one of their own songs in addition to collaborating with the band.

The Coup didn’t write songs specifically for the performance, rather choosing to perform works culled from the band’s six-album, 20-plus-year catalog — including a few unreleased tracks and songs they don’t generally perform live. Though calling Shadowbox an augmented Coup concert would surely sell the event and its collaborators short, it seems as if all the key elements of a Coup show will be there: the songs, the audience-bludgeoning power, and especially the politics.

Though the title Shadowbox primarily refers to the effect Bail’s artwork creates on the performance space, Riley sees multiple meanings to the title. Shadowboxing is the practice in boxing of “fighting” an imaginary opponent to prepare for a match, and Riley sees parallels between this practice and the way in which the Coup “prepares” its listeners to fight real-life injustices. He’s aware political art can’t always change the world on its own, but it can inspire listeners to take action.

This gives rise to a third, even more poignant meaning to the title: that the social issues depicted in the work are only shadows of what’s really happening in the world, contained within the clearly defined “box” of the performance space.

“There are a lot of terrible things happening in the world that we’re talking about in the performance,” Riley said. “But the artwork is just a shadow of what’s really going on.”