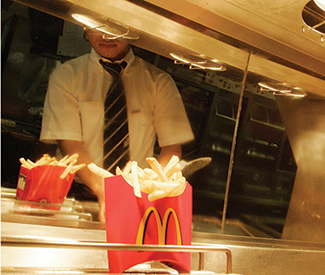 Christy Price doesn’t want to work forever. At 60, the security guard has worked in formula retail stores for 25 years. She says she has trouble making a living due to cuts in her work schedule, a setback that could prevent her from retiring for the foreseeable future.

Price, who has been with her current company for a decade, works at various retailers her company contracts with. Her shift from full- to part-time work is typical for employees of formula retailers in the city, many of whom are half Price’s age and attempting to support families or make their way through college.

“I’m more or less in the same predicament as [the retail workers], in terms of hours,” Price said. “It’s scary, and it’s awful sad. You’ve got people who want to work and contribute, but they aren’t given the opportunity.”

Sup. Eric Mar’s recently proposed Retail Workers Bill of Rights aims to change that. Unveiled at a July 29 press conference at San Francisco City Hall, the legislation seeks to boost prospects for retail workers “held hostage by on-call scheduling, diminished hours and discriminatory treatment by employers,” according to a statement issued by Mar’s office. There are also plans to expand the legislation to include employees of formula retail contractors, like Price.

“We’re here today because raising the minimum wage isn’t enough,” Jobs with Justice Retail Campaign Organizer Michelle Lim said at the press conference. That same day, the Board of Supervisors voted unanimously to place a measure on the November ballot to raise the San Francisco minimum wage to $15 an hour by 2018.

The current trend is for retail employers to hire part-time workers, spreading the hours thin and requiring employees to be on call for many more hours of work than they actually receive. That creates unpredictable schedules, making it difficult for workers to pay the bills.

Having stable work hours makes it possible for formula retail employees to plan for other parts of their lives, like earning college degrees, spending time with family or working other jobs — which is often a necessity for lower wage workers. Plus, as Price notes, companies with too many part-time employees aren’t getting the most out of their workers.

At the press conference, Mar was joined by fellow lead sponsor Board President David Chiu and co-sponsor Sup. John Avalos, along with speakers from local labor advocacy groups and a host of current and former formula retail workers.

As Lim explained, the proposed Bill of Rights package has four provisions. The first calls for “promoting full-time work and access to hours.” It would require formula retail employers to offer additional hours of work to current part-time employees, before hiring additional part-timers.

That would help prevent situations like those mentioned by retail employees speaking at the press conference. One Gap employee noted that part-time workers are often expected to commit to up to 30 hours of availability a week, yet would only be offered as little as 10 hours, despite being required to remain on call.

Another formula retail employee, Brian Quick, had a particularly rough experience while working for Old Navy at the clothing retailer’s flagship store. Having worked in retail for four years, he said his schedule for the upcoming week would come out on Thursday night, and the hours constantly fluctuated.

“It’s hard to plan anything such as doctor appointments when you aren’t even sure when you work,” Quick said. “Some weeks I would work 35 hours, and the next I’d get 15 hours. How am I supposed to pay bills?”

Last-minute notices became routine for Quick, who sometimes received calls informing him he didn’t have a shift anymore the night before he was scheduled to work.

“One day I came into work and they cut my hours right then and there,” Quick said. “Seems like everything is based on sales and not the well-being of the people who make the sales happen.”

Quick had other troubling experiences while working for Old Navy, including when he was denied Christmas vacation despite applying for it three months in advance. He eventually got the time off, but only through persistence and “the last-minute intervention of a sympathetic manager.”

“We know that consistent and reliable scheduling is important to our employees,” said Laura Wilkinson, a spokesperson for Gap Inc. “We are exploring ways to increase scheduling stability and flexibility across our fleet of stores. For example, last month we announced a pilot project with Professor Joan Williams of [University of California] Hastings College of Law to examine workplace scheduling and productivity.”

Gap Inc., the corporation that owns Old Navy, could be at the forefront of improving conditions, but the legislation’s supporters aren’t counting on retailers to make the necessary changes.

Instances like Quick’s are common in formula retail all over the country. Many retail employees, including some of Quick’s co-workers, must support families despite the unpredictable hours and low wages.

The second provision of the Retail Workers Bill of Rights attempts to fix that. It calls for “discouraging abusive on call practices” and aims to “encourage fair, predictable schedules.” Specifically, that would entail employers posting core schedules in advance with reasonable notice and providing premium pay “when an employer requires an employee to be ‘on-call’ for a specific shift, or cancels a shift with less than 24 hours notice.”

The third provision looks to improve conditions for part-time workers, calling for “equal treatment.” That means prohibiting employers from discriminating against employees “with respect to their rate of pay,” among other things like promotion opportunities and paid or unpaid time off.

It also addresses a chief concern for many part-time workers: ensuring that employees unable to maintain “open availability,” or being available at any time for a shift, are not denied employment. That’s especially significant for students and parents who have to balance their lives outside the retail industry with its demanding work hours.

“These policies, I feel, will have a huge impact on the lives of tens of thousands of our services workers, many of them low-wage workers who live with uncertainty and fear about their schedules and their other responsibilities in life,” Mar said as he introduced the legislation.

“Many of my family members and close friends are in that category, [along with] single moms, students in college and others that really deserve fair scheduling and a fair chance at economic justice.”

The final provision seeks to protect workers’ job security when their companies are bought or sold, requiring a 90-day trial period for existing employees if a formula retail business is acquired. This is meant to prevent companies from simply forcing out previous employees, allowing the workers a grace period to search for new work.

The legislation would impact an estimated 100,000 workers at approximately 1,250 stores across San Francisco. Those that qualify as formula retail businesses under city law include fast food businesses, restaurants, hotels and banks, and they must meet requirements in Section 703.3 of the San Francisco Planning Code.

In short, the law will apply to businesses considered to be chain stores, such as Target, McDonald’s, Starbucks, Wells Fargo and other major companies doing business throughout the city.

But the Retail Workers Bill of Rights’ supporters believe its impact will be felt beyond San Francisco, citing the city’s history of starting nationwide movements.

“San Francisco has always led the way when it comes to policies that protect working people,” Lim said. “The Retail Workers Bill of Rights is a commonsense proposal to bring stability to some of our city’s most marginalized workers.”

The supervisors sponsoring the ordinance have received plenty of help from Lim and Jobs with Justice San Francisco, a worker’s rights organization that has played an integral role in the city’s fight to improve labor conditions.

In 2013, Jobs with Justice mobilized labor support for the California Domestic Workers Bill of Rights, legislation not unlike Mar’s proposed legislation. In September 2013, Gov. Jerry Brown signed the Domestic Workers Bill into law, making California the nation’s first state to mandate overtime pay for domestic employees, specifically designating time-and-a-half pay for those working more than 45 hours a week or nine hours a day.

Even more support has come from the San Francisco Labor Council, Service Employees International Union Local 87 and Young Workers United, among many others, all of which have endorsed the legislation.

The proposal will come back into play in September, when the board returns from its summer recess. The process will start with public hearings, at which Mar said he looks forward to “really lively public conversation.”

That will give workers like Julissa Hernandez, a Safeway employee for 13 years and a veteran of the retail system, a chance to have their voices heard.

Speaking at the City Hall press conference, Hernandez said, “We should let retail workers know that they are not alone in this fight.”