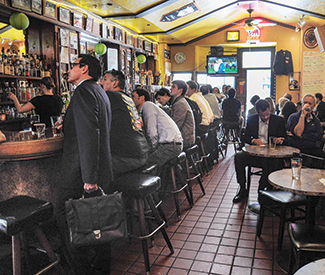 THE WEEKNIGHTER Dave’s bar is America. I don’t mean that in the sense that you walk in the door and get the hairy eyeball, with a chaser of, “What the kind of hippie-communist-homo are you?” (Spoken in a drawl, of course). I mean it in the most basic sense — the mythic melting pot of equality and freedom. When you enter Dave’s (29 Third St, SF) you are entering a new world. It doesn’t matter how much you make (or don’t make), what you drive, or whether you work on construction sites or the human brain. All of that is left at the door. The only thing that matters is if you like to drink.

There are no mustachioed bartenders in suspenders playing with tinctures distilled from random Amazonian berries you’ve never heard of. Instead, you’re often greeted by an Irish lady who you can tell won’t take any shit, but who will also chat with you all day long. This is a fucking bar, man. Some days you show up and there’s free food put out. Other days you sit on a stool and somebody you’ve never met buys a round for the entire bar. It’s almost like Dave’s has some supernatural ability to give you whatever it is that you need on that particular day.

You sit at that bar long enough you’ll hear every kind of story imaginable, from every kind of person. You’ll walk in just to have a quick shot and a beer — and leave four hours later, having met, dunk, and talked shit with a car salesman from Oklahoma, a recently off-work janitor, a tech millionaire, and someone whose family has had 49ers season tickets since they played at Kezar Stadium. You will never see any of these people again in your life, unless you go back to Dave’s.

I’ve actually taken a few girls on first dates to Dave’s. I mean, we didn’t spend the entire time there, but used it more as a meeting place from which to embark on the rest of our activities. You’re probably saying, “Hey Stu, why would you take girl you’re trying to impress, and with whom you’re hoping to touch special places, to a dive bar like Dave’s?” Besides the fact that I’m broke and can actually afford the awesomely cheap drinks, Dave’s, in its own way, makes everyone feel comfortable. It was voted least pretentious bar in SF for this reason. Dave’s is the bar that everyone has had a good time at, even if they’ve never been there before.

These days I worry about places like Dave’s. Sure it’s been there for like 30 years or something, but it doesn’t have the shine and sheen that so many recently opened bars in SF have. For those of us who know better, this is exactly why it’s attractive. I just worry that the Robert Moseses of the world, the people who would plow a giant freeway through quaint Greenwich Village, have too much steam behind them right now. These are the people who don’t realize that having reclaimed wood and Edison bulbs and $13 cocktails doesn’t make a place special. In fact, it makes a place just like everywhere else. I’ll take a shot and a beer at Dave’s over all that fluff any day of the week. Hell, I’ll probably see you there.