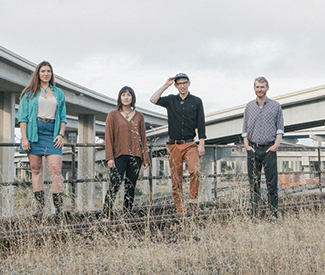 LEFT OF THE DIAL Can you smell it in the air? It’s that late-summer, chilled pinot grigio-tipsy, organic ice cream-sticky scent of Outside Lands, just around the corner.

Yes, it’s that time in our fair city’s annual trip around the sun when we get the chance to show Austin and Indio and those warm summer New York nights exactly what we here in San Francisco are made of when it comes to music festivals: Namely, expensive, gourmet food, wine, and beer stands, a commitment to slapping the word “green” in front of everything; and a beautiful, natural outdoor venue in which, should you forget to bring three extra layers in an oversized bag, you will absolutely freeze your ass off by nightfall.

All snark aside, one thing I’ve always appreciated about OSL in its six short summers is that, nestled amongst the sometimes overwhelmingly corporate feel of the thing — something that was maybe inevitable, as Another Planet Entertainment grew from little-promoter-offshoot-that-could into perhaps the most influential promotions company in the Bay Area music biz — is a commitment to bringing local bands along for the ride whenever possible.

Sure, everyone’s excited to see Kanye. I’m excited to see Kanye. Anyone who’s going to see Kanye and tries to say anything more intellectual about it than “I’m really fucking amused in advance and very excited to see Kanye” is lying. But nothing fills me with more hometown pride than watching a band I’ve been rooting for since they were playing living rooms or parklets take the stage in Golden Gate Park in front of thousands of paying, attentive potential new fans.

With that in mind, here’s your guide to a few of our favorite local folks representing the Bay Area at this year’s fest. Show up for ’em. In most cases, they’ve been working toward this for a long time. And if you don’t have the funds to make it to this year’s OSL? Lucky for us — unlike Kanye — these kids play around the Bay all year round.

Nicki Bluhm and the Gramblers

The unofficial queen of Bay Area alt-folk has had a good year since August 2013, when her band’s debut LP took to the airwaves and then to the national stage, with Bluhm’s killer vocals and long, tall mishmash of Stevie/Janis appeal at the helm. Fri/8 at 4pm, Sutro Stage

SF’s own Scott Hansen has also been riding high this year, since the release of Awake in March propelled him from bedroom artist to something else entirely with its lush, ambitious landscapes of color and sound. We still think we prefer him in headphones to outdoor festival-style, but we’ll take it. Sat/9 at 3:40pm, Twin Peaks Stage

If you don’t know his solo stuff (and you should; last year’s MCII was one of the best local records of the year), you probably know him as Ty Segall’s right-hand man. Either way, Cronin is one of the most authentic voices in the Bay Area’s indie scene right now, with just enough power-pop sweetness and strings coloring even his scratchiest garage-punk anthems. Fri/8 at 4:30pm, Panhandle Stage

Did you love Girls (the SF indie powerhouse, RIP, not the HBO show)? Of course you did. Did you love Christopher Owens’ solo debut, Lysandre? We did too. He’s giving us another one in September; now’s your chance for a sneak preview of some likely highly emotional and lushly orchestrated songs. Sat/9 at 2:30, Sutro Stage

This 27-year-old rapper and SF University High School graduate has been gaining attention with his whiplash-inducing flow, which he honed in his teens as a slam poetry champion. His most recent album, June’s All You Can Do, is poised to take him from Internet and Ellen-famous to just famous-famous. Sun/10, 2pm, Twin Peaks Stage

Bossa nova dream pop, Brazilian shoegaze, whatever you call it: This Oakland quartet (and Bay Guardian Band on the Rise from 2012) draws inspiration from all over the globe for its undeniably catchy, never predictable, harmony-drenched melodies. Sat/9 at 12:40pm, Twin Peaks Stage

“This is not your father’s gypsy jazz,” warns Beso Negro’s bio, which — while we’re pretty sure our dad doesn’t have a kind of gypsy jazz — does a pretty good job of explaining the modern sounds infused into this Fairfax five-piece’s musical vocabulary. Hell Brew Revue Stage, all three days, check the website for details

As if we didn’t have a big enough soft spot for this East Bay alt-soul-folk outfit already, there’s the fact that they got their start busking outside of festivals for their first few years — including Outside Lands. Seeing them on the inside will be sweet. Sat/9 at noon, Sutro Stage

With horns, theremin, and just about every kind of percussion you can think of, this Point Reyes-based eight-piece is a mish-mash of everything dark and dancey and nerdy and weird, describing themselves as “part rumba band in purgatory, part cinematic chamber group, part shipwrecked serenade.” Serious cult following here. Hell Brew Revue Stage, all three days

Sultry, jazzy, rootsy — we’re excited to see what this mainstay of “voodoo blues” nights at small rooms like Amnesia can do on a bigger stage. Hell Brew Revue Stage, all three days

O’Reilly, a singer-songwriter who’s clearly done his Delta roots, gospel, and traditional folk homework, played OSL last year — well before putting out a debut studio album, the aptly titled Pray For Rain, in March of this year. This is a three-piece with arrangements that make the band seem much bigger. Hell Brew Revue Stage, all three days