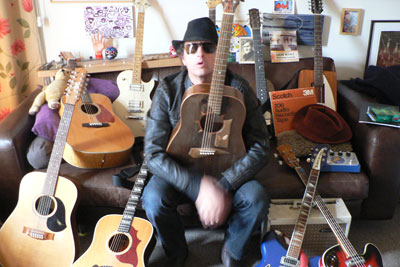 A couple of years ago, on a warm summer evening in the city of Blue Lake, California, I stopped by my friend’s house after work. A man with a curly mop of hair was sitting in the front yard with his toes in the grass, strumming an acoustic guitar.

This isn’t unusual in Blue Lake. The unincorporated town hides among the Humboldt County redwoods and always seems to attract a steady flow of tone-deaf vagabonds. But it turned out the man was not at all tone-deaf and only partially transient. It turned out the guy on my friend’s lawn was David Kilgour of the New Zealand indie rock band The Clean.

The Clean is perhaps one of the most unsung legends of post-punk lo-fi in the ’80s and ’90s. The band is regularly cited as having influenced relatively more known titans, such as Yo La Tengo, Guided By Voices, and Pavement (in his college days, Stephen Malkmus is said to have played the Clean on his radio show). At its core, however, the Clean pioneered a sound characterized by trebly psychedelia and strident nonchalance — often dubbed “Kiwi rock.”

That night in Blue Lake, David Kilgour — along a couple of his collaborators, Steven Schayer (of California band the Black Watch) and Tony de Raad (of the Heavy Eights) — had come to play a show. It wasn’t as part of a tour, or because Blue Lake was on Kilgour’s list of places to visit, but simply because my friend had sent him a shot-in-the-dark request that he come play a gig.

But why? I later asked him. “The whole music thing now is just sort of an adventure,” he said. “It’s not about selling records or making it anymore — it’s about making music…and sometimes that takes you to interesting parts of the world.”

“It’s a lot like being at sea,” he continued. “Sometimes we feel like we’re pirates. We come into bay and take their gold and maybe their women and jump back on the boat and get the fuck out of town and sail to the next port.”

All pirate imagery aside, the fact that Kilgour even responded to my friend’s email — and followed through — really says a lot about him as a person. Merge Records, the label that produces his current solo project, David Kilgour and the Heavy Eights, describes him as “a guitar god for guitar athiests..he’s worthy of worship, but neither expects nor demands it.” The band plays the Rickshaw Stop Friday, Aug. 1.

At the Old Logger Bar in Blue Lake that night, Kilgour played to a crowd of roughly 30 people, who seemed almost suspicious of his talent. “Who is this guy?” one craggy old barfly whispered to me as Kilgour strummed the opening chords to “Anything Could Happen,” one of the Clean’s most classic tunes.

But in our recent conversation, Kilgour expressed that the Clean (which he consistently referred to as “The Clean thing”) is a thing of the past for him. He explained that, these days, the band doesn’t come up with new material, or even rehearse. “It’s just sort of a hobby now,” he said.

These days, rather, the self-described “hippie pagan with punk undertones” is more engaged with his solo project. The Heavy Eights showcase Kilgour’s journey away from the angsty celebrations of the Clean, toward a more feeling-based sound of psychedelic good will, which has always seemed present — even in his earliest work.

“Let me put it this way,” he said. “I’ve always had a belief in the other-ness of life and I’ve had some incredible experiences with that other-ness…I just want to send out a good vibration, really, and I do want to help people, and if it does help people — bloody great — because it helps me.”

After the show, everyone went outside of the bar and watch Kilgour, Schayer, and de Raad roam the streets and jammed on old folk tunes outside. At one point the vibrations were so high, Schayer, still playing the guitar, splayed himself out in the middle of the street, causing a car to come to a screeching halt. These guys had the rock star mentality without the rock star pretension. That night, they were one of us, and that experience was truly “other.”

Kilgour is back is California, this time with a full band, and he will be release his new album, End Times Undone on Aug. 5. For those daring enough, he will return to the Logger Bar this Thursday, July 31 before heading to the Rickshaw Stop Friday, Aug. 1.