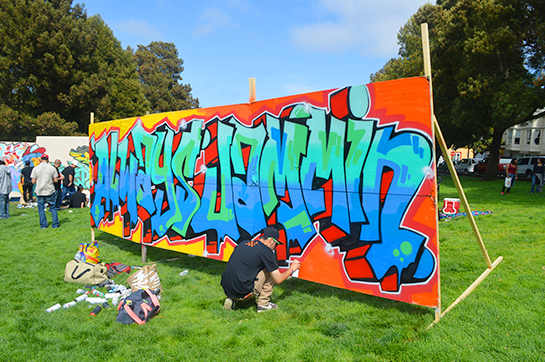 Normally the sound of 20 or so artists rattling and spraying aerosol cans would be quickly followed by the sound of sirens. But Sat/19 the fades went up with gusto.

Artists tagged free standing art boards at Precita Park for the Urban Youth Arts Festival, an event that brings the ultimate underground art into a safe space. Attendees munched on burgers and listened to some good tunes at the festival, which is now in its 18th year.

Many of the street style murals paid homage to the Bay Area, from SF to Oakland. “We’re showing our love to the aesthetic of the community,” Xavier Schmidt, a 25-year-old organizer of the event and SF native, told us. One muralist hand painted a robot adorned in SF Giants and 49ers gear punching out a Google Glass-wearing Godzilla.

“We’ve been doing this since 1987,” Schmidt said, speaking to the event’s roots. Even the event’s hosts, the Precita Eyes Muralists Association, have deep SF bonafides: they’ve been around since 1977.

“This is for solidarity, for community,” he said. “It’s a family event.”

Kids sprayed paint and played, adults kicked back and kvetched about youngsters, SF natives complained about tech employees, and many chowed down on burgers, hot dogs, and veggies donated by the local YMCA. Local musicians A-1 and Hazel Rose came out to play too, adding the head-banging element to the day. We’ve embedded one of A-1’s tracks below. Consider it your photo gallery soundtrack.

Names of the artists have been withheld because callin’ them out on the internet would be wack. All photos by Joe Fitzgerald Rodriguez.

This dude’s head was bangin’ as he sprayed. We’re not sure how he managed to make it look so good.

This kid was super into it, which was hilarious.

Hazel Rose performed a bombastic set that the crowd, below, felt all sorts of love for.

Oakland got plenty of love too.

Xavier Schmidt, one of the event’s organizers, said this high schooler is a real up and comer in the graffiti scene.

Some of the art boards were for everyone to paint, leading to some dooby-ous results. (Get it? Ha!)