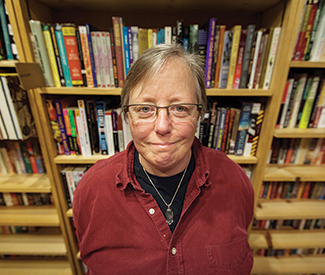 The tale of the threatened independent bookstore, quivering under the might of Amazon, is nothing new.

It’s only been two months since Marcus Books was evicted from its Fillmore District location. Both Adobe and Forest bookstores fled the Mission’s 16thh Street last year. But ebook sales growth is shrinking, and sales for many of San Francisco bookstores are up.

Instead, the tale of the struggling indie bookstore has become less about Amazon and more about a different monster: gentrification. San Francisco’s rising rents, demand for commercial space by deep-pocketed chains, and lack of commercial rent control are putting the squeeze on the city’s remaining bookstores.

Take Bibliohead, for instance. Its owner has recently been forced to relocate in spite of her bookstore’s success. Bibliohead is an easily navigable, highly curated, and tiny book jungle — more like a carefully manicured garden, really. The whole store can be explored in minutes, and there’s a gumball machine that dispenses poetry out in front once the book-happy are satisfied.

Its size has served it well. Sales at Bibliohead — Hayes Valley’s only bookstore — have risen solidly 7 percent each year since the store opened 10 years ago.

“We’re small, but mighty,” Melissa Richmond, Bibliohead’s owner, told the Guardian. “Although recently we haven’t been feeling so mighty. I’m kind of a wreck.”

In May, Richmond learned that she has until January 2015 to leave her store for four months while her building undergoes mandatory earthquake retrofitting. The landlord will double Richmond’s rent after the retrofitting, and has asked Richmond to pay for further renovations to the building when she returns.

“It’s off the table that I can stay here,” Richmond said. “I will not be offered a new lease. I don’t hate landlords, but I want a landlord who will contribute to the spirit and creativity of San Francisco.”

On June 22, Richmond launched an Indiegogo campaign to raise the $60,000 she’ll need to move and attract new customers. So far, with a little less than a month to go, she’s raised almost $3,000.

“What really breaks my heart is when a new customer walks in,” Richmond said. “They ask you how you’re doing after they’ve fallen in love with the place a little bit. Then you have to break their hearts by saying you don’t know what’s in store for your future right now.”

Richmond is not the only bookseller in San Francisco forced to relocate. Last year, Adobe Books and Forest Books were forced out of 16th Street within three months of each other when their rents increased. Forest Books slipped quietly off to Japantown, and has since experienced an increase in sales. Adobe Books’ anticipated closure was met with an invigorating Kickstarter campaign that raised $60,000. It was enough to keep the store alive, but not on gentrifying 16th Street.

Nowadays, Adobe is re-branded as Adobe Books and Art Cooperative at its 24th Street location. The original Adobe’s charming, lackadaisical, and no- structured structure has been traded for alphabetized and carefully curated books. There are only two staff members, and its used books are selling far faster than in the old location, despite its shrunken size.

“It’s strange. A lot of the times I was not sure if it would work at all, and now here we are in this shop,” Brett Lockspeiser, a member of the Adobe Books and Art Cooperative, told us. “Things are running differently, but it’s still Adobe.”

Adobe will soon be celebrating its first anniversary in the new spot. The store might not be making any profits, according to Lockspeiser, but the cause for celebration is that it’s survived.

There has been discussion among the collective members about whether or not Adobe should try to sell eReading devices, like Green Apple Books has done without much success for almost two years with the Kobo eReader. Adobe’s collective voted against Kobo, preferring not to use the same weapons as its competitor.

“I’m pretty technology positive, but I think some people in the group thought it was an ‘us or them’ kind of thing,” said Lockspeiser. “Like either you’re a book reader or you’re a techie who reads on a Kindle.”

Besides, it seems that ebooks’ incredible growth rate has finally simmered down. According to the Association of American Publishers, ebooks accounted for 27 percent of all adult trade sales in 2013. While that was up from 23 percent in 2012, it marked the first year ebook growth was down to the single digits. In January, a Pew study reported that among adults who read at least one book in the past year, just 5 percent said they read only an ebook.

Hut Landon, executive director of the Northern California Independent Booksellers Association, reports that book sales throughout San Francisco bookstores have increased overall in the past two years. Green Apple Books, an expanding bookstore with an growing collection of books and records, is even poised to open another location in the Sunset below beloved video rental store Le Video on Aug. 1.

Pete Mulvihill, co-owner of Green Apple Books, said he recently got a call from Bibliohead’s owner asking for advice on potential neighborhoods and techniques for negotiating with landlords. But he can’t always explain his own store’s success.

“Some of it is just the economy. All that money floating around South of Market is maybe trickling over here,” he told us. “Or maybe the waiters are getting better tips. I don’t know what it is, but things have been better for us.”

The growth of bookstore sales, Landon said, is mainly because Barnes & Noble has been cast out of San Francisco. Last year, Barnes & Noble, the nation’s largest bookstore chain, reported that its revenue decreased by 8 percent in the final quarter. The company’s Nook division, meanwhile, slid down 32 percent.

Yet Joe Marchione, who owns Mission Street’s Valhalla Books, still places the blame for his diminishing foot traffic on Amazon, which has made his hard-to-find books pretty easy to locate online. In 1998, when his store opened, 90 percent of Valhalla’s business came from people browsing through his odd and unique assortment of rare and used books. Now, 95 percent of his business is online.

“People forgot the joy of browsing,” Marchione told us.

As soon as his landlord makes him commit to a lease, he says he’s going to have to leave the business. “When we first opened, we were smug. We said there was no way trendy was ever going to come to Mission between 17th and 18th [streets]. Get real!” he said. “But trendy creeps in closer by the week. There’s no problem with that, except it’s forcing us out.”

It’s even forcing successful booksellers, like Bibliohead’s owner, to worry. Her faith in the printed word remains strong. “I find that there’s a whole core of people who are relieved to feel something in their hands, to flip the pages of really cool, beautiful books and kind of remember with their bodies what reading is like,” Richmond said.

When Kate Rosenberger opened a fourth bookstore in 2011 — Alleycat Books on 24th Street — many questioned her sanity, the owner said. The store has only recently been able to pay its own bills, having been relying on Rosenberger’s other store, Dog Eared Books, for survival. But the rent at Dog Eared Books is set to increase, and that means trouble.

“You can talk about e-readers, and people being distracted. You can talk about people slipping out since the Gutenberg press was invented, and all that’s true, sure,” Rosenberger told us. “But when you get hit with a huge increase in your rent, how do you deal with that? When the lease is up, you can pretty much figure you’re gone.”

These days, you deal with it by setting up a crowdsourcing campaign, and crossing your fingers that people with money like you. Or maybe you transform into an art cooperative. Or you just go somewhere else. But Richmond doesn’t want to leave San Francisco.

“I would like to preserve the culture of the city,” Richmond said. “I still think there’s something really special here.”

Barnes & Noble might be gone, ebook sales might have stabilized, and the printed word might just still be alive — but for San Francisco’s booksellers, that no longer means anyone in the book business is safe.