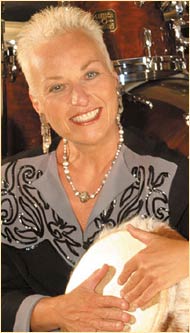 “I would get the comment ‘Gosh, you play really good for a girl,’” Barbara Borden admits in the introduction of Keeper of the Beat, which chronicles her lifelong passion for drumming. The documentary, by San Francisco’s David L. Brown, airs Sun/6 on KQED.

The Always brand’s empowering #LikeAGirl ad campaign made the rounds on the internet this week, but Borden’s musical sojourn, discouraged for a female at the time, is decidedly more inspiring (especially since it’s delivered by a badass drummer and not a corporation).

Borden is aptly described in the film as a “drumbeat diplomat” — she bypasses the language barrier (cultural, too, as the film highlights the universality of music during the Yugoslavia Civil War and in a remote part of Siberia) between her and people she meets by quickly finding a way to communicate in the language of drums and punchy beats.

Clips from her past performances are cleanly weaved between interviews, showcasing both Borden and director Brown’s strengths: her story and his storytelling. Lavish camerawork and breathtaking shots are noticeably absent from the film; they’d really only detract from the unadulterated music and dialogue. It’s a shame the documentary only clocks in at a little under an hour long, as the poignant montage of vignettes whizzes right by you.