Home A farewell to Death Grips: The Sacramento hip-hop group's most memorable moments 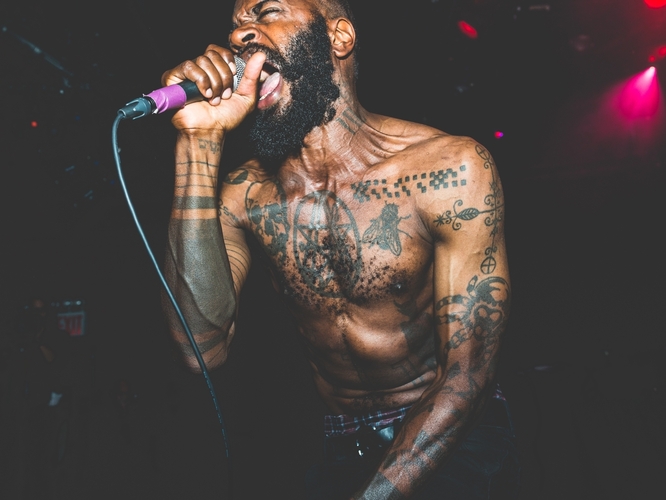 “We are now at our best and so Death Grips is over,” announced a napkin posted to Death Grips’ Facebook page yesterday afternoon.  The sudden dissolution of one of the most controversial, confrontational, and influential hip-hop groups of the 2010s so far spurred an outpour of dismay among music fans. But anyone who’s been keeping a tab on Death Grips shouldn’t have been too surprised.
Since forming in 2010, their career has been a non-stop parade of curveballs and out-of-the-blue decisions. They’ve failed to show up for their own shows, dropped not one but three surprise albums, and left the major label they were briefly signed to after a single record. Yet this isn’t mindless rebellion; it’s a calculated plan, and it makes sense that their farewell letter should refer to them as a “conceptual art exhibition.” No group since the Sex Pistols has been so irreverent in such a calculated manner — and it’s thus fitting they should dissolve at their peak, as that band did 35 years ago.

In keeping with this trend, it makes sense that Death Grips should choose now to disband. Last month saw the surprise release of niggas on the moon, the first half of a double album entitled The Powers That B. Keeping fans anticipating a second installment seemed incongruous with the band’s unpredictability. But leaving The Powers That B as a posthumous artifact to remind the world of the band’s painfully short lifespan was the best decision the band could have made at this point. They ended with a bang, but the fallout will linger.

And there’s no doubt they will be remembered. Whether you love them or hate them, they’re undeniably one of the most influential acts of the 2010s so far. Traces of their harsh, industrial style can be found all over Kanye’s Yeezus, which has already influenced countless rising artists — collaborators Arca, Evian Christ and Gesaffelstein, plus acolytes like Quirke and Beyonce producer Boots.  That’s right, Death Grips’ sound has made its way to a million-selling record by arguably the greatest pop star of the modern era–and perhaps it’s no coincidence she chose to drop that album by surprise.

Here are 10 of the moments that Death Grips will be remembered for.

This served as many people’s introduction to the group and its lunatic frontman, MC Ride. If you’ve never seen this video, go in blind, as I did when it blew my mind open as a high-school junior and nascent rap fan.

Just when Death Grips threatened to disappear into the pile of careers left behind by the already-waning swag-rap movement, they dropped this pummeling but surprisingly poppy single and won over the hearts of indie bloggers (and introduced the word “noided” to the millennial vocabulary).

A band as aggressive as Death Grips might seem like a poor choice for a major label, but Epic sensed their lasting impact before many of us and released The Money Store. It became a critical hit upon release, placing in Pitchfork’s top 10 of the year and receiving a rare 10 from The Needle Drop’s Anthony Fantano.

Death Grips revealed their irreverent streak after dropping NO LOVE DEEP WEB, their phallus-adorned second album of 2012, for free online without their label’s knowledge. Needless to say, they were promptly dropped.

This NO LOVE DEEP WEB track was accompanied by a thirteen-minute, mostly silent black-and-white film that featured, among other things, MC Ride eating a plant. As with the “Guillotine” video, go in blind for the best experience.

In what is easily their most controversial move, Death Grips bailed on two shows in the Chicago area in early 2013. As it turns out, they never planned on showing up to any of their planned tour stops.

The first single from Government Plates (though nobody knew that at the time) was unlike anything the band had released before, leaning closer to trip-hop than industrial and containing enough one-liners to make Big Sean question his entire career.  Many one-time haters of the band were forced to reconsider after this track, and the ambiguity surrounding whether or not it had a parent album caused interest in Death Grips to reach a breaking point.

Death Grips mania may have hit its absolute peak in the manic hours after the surprise release of Government Plates.  Released as a series of YouTube videos, the album turned out to be on par with any of their work, containing “Birds” as well as a host of bizarre songs that leaned closer to ’90s avant-electronica than anything else.

“New Death Grips Album Featuring Bjork!” screamed the headlines. Though how much involvement Bjork actually had in this album is debatable, it was Death Grips’ final big curveball before their breakup.  Slated as part one of a double album entitled The Powers That B, it was poorly received compared to the band’s prior releases.