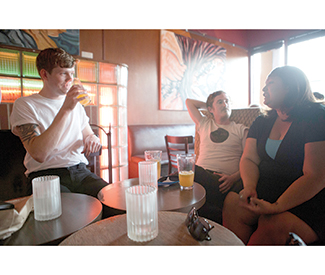 There’s something romantic about San Francisco’s summertime fog. Those damp and chilly nights belong only to us, and the atmosphere they create is what dreams are made of. While the rest of the country simultaneously shares the same experience of panting and sweltering, we bundle up in scarves and coats and hoodies and boots just to run to the store. Maybe that’s the real reason San Francisco feels like a bubble. Maybe it’s not just that we’re this bedrock of progressivism and technological innovation. Maybe it’s that, like living inside a shaken snow globe, our lives are defined by the fact that the rest of the world is obscured from us by the mists floating in the air.

I’ve been telling Noah for a while that I’m gonna go visit him at the Fireside Bar (603 Irving, SF. 415-731-6433). We used to work Thursday nights together at the Golden Gate Tap Room until we didn’t anymore, and I’ve been meaning to catch up with him during one of his shifts at the Fireside. Situated at the corner of Seventh and Irving, the Fireside may be the perfect neighborhood bar. It’s got a dive bar feel without being rundown and smelly, the drinks are stiff and cheap, and the regulars are friendly enough. But most importantly it’s got a motherfucking fireplace.

Imagine this: You’ve decided to get out of your regular routine and go explore somewhere else. Maybe you wandered around Golden Gate Park or decided to check out the Inner Sunset. Or you just walked to the end of Upper Haight and decided to keep on going into the unknown. It’s July in San Francisco, and the sun is starting to go down, and you’ve been wandering around all day with someone who makes you feel all warm and gooey inside. Let’s grab a drink, one of you says as your feet start to hurt and your mouth feels parched and the top of the ear where you just kissed your special person is cold to the touch. And then you see the Fireside Bar. While San Francisco summers have been around far longer than the Fireside, it’s weird to imagine one without the other. You think about this as the two of you order drinks before sitting down to make love-eyes at each other near the fireplace.

I first moved to San Francisco in the summertime, and considering I lived in the Upper Haight, the fog was like a visitor who showed up towards the end of each day. My friend Maria lived a block down from me so one night we got drunk at her place and decided to go on an adventure. I grabbed my skateboard, she put on her roller skates and we headed west to explore parts of SF neither of us was familiar with. Cutting through the fog and the shadows of UCSF we eventually found our way to the Fireside, where we stopped for drinks and so Maria could clean up the scrapes she received from falling repeatedly on her skates. We got warm by the fire and then managed to get our drunk asses back to our respective homes without either of us cracking our heads open. It was a romantic night, not in a sexual way, but in a way where we both knew we were two people falling in love with San Francisco and its foggy ways.

I think it’s time I finally get my shit together and go visit Noah. Maybe I need a little fog and the Fireside to remind me of all the reasons I fell in love with this city in the first place.