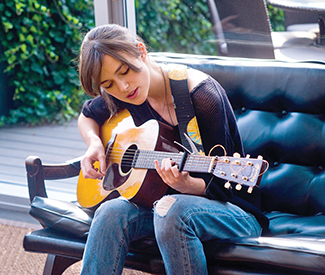 FILM The joke’s been made elsewhere that Begin Again, the latest from writer-director John Carney (2007’s Once), should have been dubbed Twice. There are undeniable similarities. Though Begin Again takes place in New York City, not Dublin, it’s another musical tale of a romantically-challenged artist whose life is changed by a chance encounter. However, unlike Once, Begin Again has an A-list cast, with Mark Ruffalo, Keira Knightley, and Catherine Keener, plus big-name musicians like Adam Levine and CeeLo Green.

Carney eases us into this tale of Big Apple heartbreak and redemption by playing its opening moments multiple times from different perspectives. Jolly busker Steve (scene-stealer James Corden) puts his bummed-out buddy Greta (Knightley) on the spot at an open-mic night, where she croons a song she’s just written about jumping in front of a subway train. (Knightley does her own singing, but careful camerawork ensures we never get a good look at her guitar skills.) Dan (Ruffalo), a down-on-his-luck music-biz professional whose career status is nearly as dismal as his personal life — he’s estranged from his music-journalist wife (Keener) and teenage daughter (Hailee Steinfeld) — happens to stumble into the joint as Greta takes the stage.

He’s enthralled by her performance, and the film does an “earlier that day” rewind to let us know why Dan is so drunk. Truth is, he woke up wasted, to the annoyance of his longtime business partner (Mos Def), who’s laser-focused on keeping their record label profitable (one idea: bands doing “audio commentary” on their own records…ugh). Dan, whose job is in serious danger, dreamily clings to the old-school “fostering talent” model. His ideals may be sky-high, but his dignity’s sloshing at the bottom of the flask he keeps stashed in his aging Jaguar — a status symbol of a lifestyle he hasn’t been able to afford for some time.

After he introduces himself to Greta, certain she’s his ticket to creative rebirth, he’s surprised to learn she’s packing a fully-operational bullshit detector. She also doesn’t take compliments well — “Music is about ears, not eyes,” she insists, when Dan says she has the looks to make it big. But there’s an easy chemistry between them, and once she Googles him and checks his bona fides (Harvard, Grammys), she softens. A little.

We see why Greta is so angry at the world in another rewind. She’s a recent arrival in NYC, tagging along with boyfriend and songwriting partner Dave (Levine). He’s a hotshot rising star who soon morphs into a lying, cheating, trendy facial hair-growing rock ‘n’ roll cliché. (If you have a built-in aversion to the “Moves Like Jagger” singer, this is, needless to say, perfect casting.) These scenes are so overdone — Rob Morrow cameos as a sleazy record-company exec — that Carney’s point of view is abundantly clear: tailoring one’s music to please the basic-bitch demographic and achieving overnight success is bad; while penning personally meaningful tunes and recording them on one’s own terms is good.

Fine. On principle, who doesn’t agree with that? Of course, it’s rad that Greta and Dan decide to take to the streets, NYPD be damned, and record an entire outdoor album with a rag-tag band that signs on thanks to Dan’s fading reputation and, it would seem, Greta’s talent, although for all its emphasis on musical integrity, Begin Again doesn’t bother fleshing out any of the other musician characters. Playing a former client of Dan’s, Green materializes to command a scene or two and undermine the film’s “it shouldn’t be about the money” message, since he sure makes living in a fancy mansion look like a good time.

Another point of contention: Greta never claims to be a great singer, but Knightley’s wispy pipes hardly suggest the glorious potential that perks Dan’s golden ears. Her tunes are forgettable folk-pop, and while some of the same songwriters worked on Begin Again, there’s nothing here that telegraphs the emotional weight of “Falling Slowly,” Once‘s Oscar winner. Begin Again‘s broader themes of music as a healing balm (the film’s original title, as subtle as an anvil to the skull: Can A Song Save Your Life?) are equally generic, illustrated by a scene that has Dan and Greta soothing their sadness by bopping all over the city with a headphone splitter listening to soul jams.

Begin Again strives, with obvious effort, to Make a Statement about an industry struggling to find its identity amid such troubling inventions as revenue-sapping free downloads, YouTube as a career launching pad, and shows like Levine’s own The Voice, which bring instant stardom to artists without the benefit of record-company nurturing. These are worthy issues, but they also make for some heavy-handed dialogue: “We need vision, not gimmicks!”

Fortunately, Begin Again fares better with its explorations of complicated relationships. Nobody does rumpled and wounded better than Ruffalo, and his connections with Keener and Steinfeld feel lived-in and authentic. Knightley has the most obvious character arc, as well as the biggest burden in having to sing — easily the film’s primo curiosity factor, aside from the stunt casting of Levine — but she’s likable as a hipster scorned, determined to figure out her next move even as her world crumbles around her. (Carney does a good job keeping the breakup storyline from getting too maudlin; witness a musical fuck-you drunk dial to Dave’s voice mail, in which an outpouring of emotion is livened up by an impromptu kazoo solo.) It’s also a surprisingly relaxed performance, given her predilection for films like 2012’s overstuffed Anna Karenina. Bonus: despite those wistful song lyrics, she doesn’t end up jumping in front of a train in this one. *