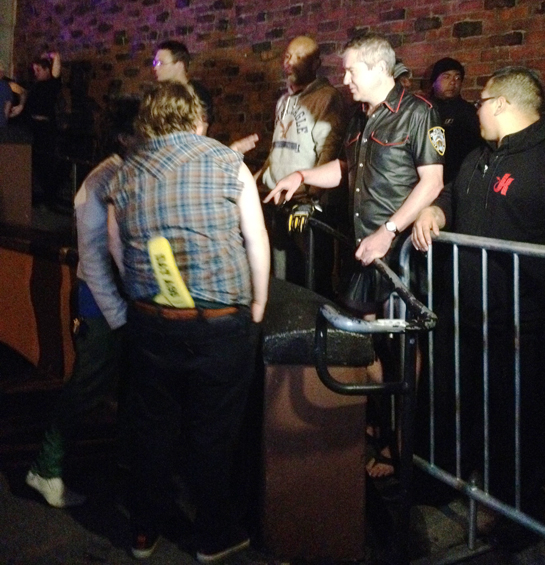 At least six people were arrested and taken into custody shortly before midnight on Saturday at the 16th Street Mission BART Plaza following a raucous protest of Kink.com’s pre-Pride party, according to San Francisco Police Department spokesman Albie Esparza.

The protest, put on by LGBTQ activist group Gay Shame, totaled around 150 people who were unhappy with the theme of the Kink.com party, “Prison of Love.” They allege that the company used sexual assault in prisons as a means of revenue, saying it has “turned these genocidal practices into a cash-making joke.” (Tickets to the party were as much as $175.)

Though a statement from Gay Shame said the protesters were arrested “without provocation,” Esparza told us they stemmed from alleged assaults on the security guards at the party by protesters. According to an account of the protest compiled by Armory facilities manager Andrew Harvill and provided by Kink.com CEO and Armory owner Peter Acworth, “protesters were largely peaceful, though unruly. Having said that, at least a dozen were highly militant.”

Witnesses recalled seeing a Kink.com security guard follow protesters to 16th Street roughly 30 minutes after the protest ended and begin “targeting people who were casually standing on the sidewalk getting ready to go home.” According to the witnesses, “the arrests and police violence were reportedly in retaliation for the night’s protest.”

Esparza confirmed that a security guard followed the protesters down to the plaza, though for the purpose of identifying the offenders when the police arrived. One protester reportedly threw a metal object and made threats toward a security guard during the protest, both of which are being charged as felonies, while another allegedly through an egg and spit on a security guard. When the police attempted to arrest the protester for the alleged felonies, Esparza said two other protesters tried to intervene. They were arrested and charged with lynching—a violation of Penal Code 405a, defined as “the taking by means of a riot of any person from the lawful custody of any peace officer.”

Two other protesters were cited for interfering with an officer and resisting arrest, and released, according to Esparza. The protesters who allegedly threw the egg was cited for battery and released, he said. But those involved in the protest see it a bit differently.

“A friend of mine was standing with a bicycle and they arrested her seemingly at random,” said protester Erin McElroy, who was at the BART station and said the police were simply searching for someone with a bike, which led to her friend’s arrest. Similarly, another person was arrested because the police “were looking for an Asian woman with short hair,” according to McElroy, and the woman was “identified as somebody who had been with a provocateur.”

Those arrested and facing felony charges are Prisca Carpenter, Sarai Robles-Mendez, and Rebecca Ruiz-Lichter, although District Attorney George Gascón is unlikely to pursue the lynching charges, according to Rachel Lederman, president of the San Francisco Bay Area Chapter of the National Lawyers Guild.

“I can pretty much guarantee that the DA will not be proceeding on those charges. It is the DA who makes the charging decision…[the protesters are] being subjected to preemptive punishment right now,” Lederman wrote in an email.

Video of the Prison of Love pride party provided by Kink.com.

Harvill’s account of the events stated that protesters “used a slingshot to propel objects at security,” and punched and spat in the face of the Armory’s manager of security. The Armory guards reportedly did not retaliate or detain anyone, though they had to “block/deny intrusion onto property a few times.”

In his account, Harvill also wrote, “There was a decent contingent of protesters who were militant and provoking. Our own security was extremely professional in face of numerous provoking acts and assaults. Any claims of police brutality would be highly unlikely, but I will confirm exact details of those arrested.”

Those involved with the protest were unsurprisingly dismayed by the night’s proceedings, including members of Gay Shame.

“Like the Stonewall rebellion 45 years ago, last night’s attack reminds us how trans and queer people of color are criminalized and arrested for simply gathering in public space, like the 16th Street BART plaza,” said Gay Shame representative Mary Lou Ratchet in a statement.

Attorney John Viola, sent as an observer from the National Lawyers Guild, was also arrested, according to Lederman. The NLG is “appalled by all of the arrests…particularly that three people have been held in jail since Saturday night on groundless charges, in violation of their constitutional rights,” wrote Lederman in her email.

Four arrestees have since been released, including Viola, and all were initially medically cleared, indicating that they likely did not sustain injuries. Nevertheless, Lederman said the NLG is still working to get the three women released, with their bail currently set at a combined $178,000, Chief Deputy Kathy Gorwood told the Guardian. (Carpenter’s bail is set at $78,000, while Robles-Mendez and Ruiz-Lichter are each at $50,000.)

Acworth expressed his thoughts about his party in an open letter, stating he believes that “if a group wants to organize a particular kind of party, they should be free to do so without shame,” though conceding that “the extent to which some groups find this theme offensive because the party is happening during the San Francisco Pride weekend has given me cause to reflect.”

The Kink.com CEO has also voiced his support for the protesters’ contention, writing in an email, “I attempted to negotiate directly with the crowd, but this proved unsuccessful. This was frustrating, because I agree with the underlying issue that we are in need of prison reform,” adding, “Had it been possible to change the theme, we would have done so.”