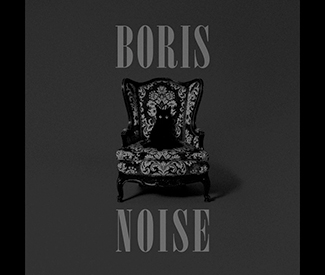 Boris have been dabbling so much in pop lately it’s tempting to look at the band’s latest album, Noise, as a return to their sludge-metal glory days. There are only eight songs, its title is appropriately hostile, and the dark gray cover looks formidable compared to the white-hued, glamorous art on the last few Boris records. But remember: This album is called Noise. Not Metal, not Amps Up To 11. Not even Heavy Rocks, the name given to two of Boris’s most metallic albums. Noise.

And noise is what it offers. These songs are loud, but not in a metallic way — the guitars don’t confront or cut into the red, preferring to simply churn away in the background. Yet this is the only thing really connecting these songs. Noise veers from J-pop to shoegaze to something fairly close to metal, charting a path that ends up sounding more like overly ambitious hardcore punk. Accordingly, it suffers from an identity crisis. As another chapter in the capricious experimental period the band’s been stuck in for the last half-decade, Noise is an interesting curiosity. But if you choose to view it as a return to form, you’re likely to come out of your listening experience very depressed.

Lana Del Rey embodies the trashiest, most cartoonish version of American iconography. Her music reeks of Gatsby, guns, Hollywood, star-spangled banners, Marilyn Monroe, and just about every other cartoon of superficial American glamour. It thus makes sense on paper that she should pair up with producer Dan Auerbach for her second album, Ultraviolence; his band the Black Keys excavates a different patch of the same oilfield, dredging up Route 66 rock reveries rather than Pepsi-Cola pop mythology.

But their respective worlds don’t collide as often as they should on this album. When Auerbach’s bluesy licks bubble up from the background, it’s intensely satisfying, putting Del Rey’s mythology in the context of his own and casting her as another great American cliché: a rock star. But for the most part, Auerbach leaves Del Rey to languish in a bath of reverb. There’s no subtlety to this production: It’s as if Auerbach cranked up a crude GarageBand “reverb” setting on all the master tracks and declared them finished. Del Rey’s persona is as monolithic as the Empire State Building — but obscured behind all the production fog, you might as well be looking at Big Ben.

Mish Way has a lot of good things to say. She’s one of America’s most engaging music critics, incorporating her personal experience into her pieces without making them too subjective to interest readers. Much of her writing is filtered through a feminist lens, something far too rare in rock criticism — especially as the misogyny of yesteryear’s rock becomes increasingly stale and obvious. She extends a lot of these sentiments to her gig as the singer of punk band White Lung, whose third album Deep Fantasy addresses sexual assault, body image, and abusive relationships. Apparently. You’d have a hard time doing much more than guessing what these songs were about without the help of a lyric sheet, because most of Way’s lyrics are incomprehensible. I’d be okay with this if not for how pristine everything else sounds. The guitars and drums are punchy and full, but Way’s vocals are so quiet in the mix that her shouting seems less of a deluge of expression as a desperate attempt just to be heard. This music should confront the listener — but ultimately, the listener ends up having to confront the music just to understand what Way is on about.