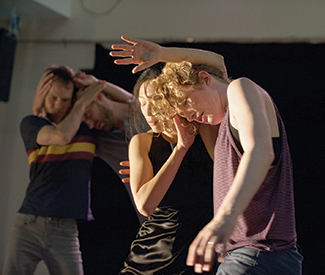 DANCE Smith/Wymore Disappearing Acts’ zany Number Zero (a space opera) is truly a piece for our times. These days, we spend more hours communicating, or at least trying to, through electronic media rather than with real human beings. We order books online, talk with our mothers via email, and set up our dates through Twitter. Most of us don’t think twice about what this does to our nervous systems, not to mention to our hearts. The clever, witty, and chaotic Number Zero offers a corrective. Sort of.

Even though Number Zero lags in many spots, this frothy concoction muddles energetically through a trajectory whose pieces ultimately fall into place. Still, I could have done without one more of those invitations for the audience to “participate.” We already do, by being there and paying attention. That’s enough for me.

Despite its humor, the show runs on top of an undercurrent of imprisonment, in the sense that these human beings are caught in a contract into which they may have willingly entered at one time — but from which now they cannot escape. When the “system” rejects them, they can try to stand their ground, or they flip out. In the beginning of the show, Ian Heisters screams at the computer that won’t accept his password (did that ever hit a nerve), though eventually, illogically, he is admitted. Later Sheldon B. Smith, a dancer as well as a physical comedian, goes berserk at the idea of being ejected from what is both a game and a rat race. Ironically, he and dancer Deanna Bangs are condemned to a process of “de-fragmentation.” An integrated sense of being, I guess, is not something 24/7 connected multitaskers take kindly to.

As a work for the stage, Number Zero is constructed as a sturdy machine, or a “system” in computer-ese, whose gears or software don’t function all that smoothly. An invisible voice, calling itself “Zed,” keeps assuring us to “trust me, you are loved, and all will be OK.” Classic sci-fi stuff. But a lot of Number Zero‘s humor also recalls Charlie Chaplin trying to deal with modernity.

The piece opens with the sextet (Bangs, James Graham, Heisters, Peiling Kao, Smith, and Lisa Wymore) spread out under an oculus in a star, or if you like, wheel formation. As the dancers begin to move around each other, trying to follow voice commands, it quickly becomes evident that Bangs is the outsider who can’t keep up rolling, running, hooking up. In a loony ritual her cohorts try vibration therapy and prayers to no avail. She fails a series of test questions, among them: Translate the binary computer code of a zillion zeros and ones into English (she does); name your mother’s maiden name and more data any of us ever knew about mom (she fails). While the scene makes us laugh, a biting edge rumbles through its implications.

Much of the delight in watching Number Zero comes from the intense sense of presence created by performers who have to react quickly to often self-contradictory instructions. Some of the basic material may have been set. In a hilarious, robotic courting duet, for instance, which takes on conventions and political correctness, Smith and Wymore’s desiccated passion unrolls in carefully codified language. When she expresses her love for him in a haiku, he tells her it’s not a haiku because it has 18 syllables.

But for the most part, the sequence in which the computer’s mellifluous voice throws “moves” at the dancers is beyond their control. Improvisation was the name of the game, and a gamer’s split-second timing was necessary to keep up with the barrage of “stop,” “return,” and “continue” commands.

The resulting chaos, surprising synchronicities, and piling on and unspooling of dancers was a treat to watch, even though many of the individual sections went on for longer than necessary. Some tweaking of the software seems in order.

Individual dancers caught the attention: Graham’s silken lunges and snake-like torso; Wymore loping circles as if trying to create containment; Kao shooting like an errant bullet through the crowd; the tall, lanky duo of Smith and Heisters in an intimate duet considered “inappropriate,” which earned them a “test.” One had to sing, the other dance. Since both were out of breath, Graham croaked, Smith wobbled. Yet, much to our illogical relief, they passed.

Slowly but surely the “natural” world creeps into this “artificial” one when strobe-like images of cities and nature periodically cut through the black and white geometries of Nikita Kadam’s visual design. When people sit quietly, they hold hands; couple formations emerge, and as the lights go down Kao and Heisters nuzzle close to each other from their space-age design chairs. *