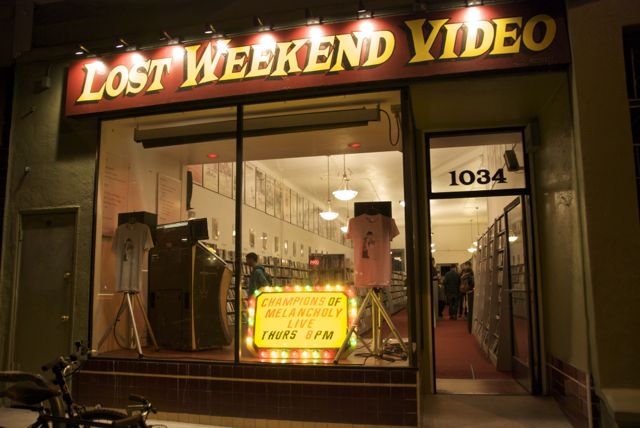 Dateline: San Francisco. Distressing news, via Facebook, on the “all the cool shit is in danger” front, with a post late Fri/20 by Valencia Street stalwart Lost Weekend Video:

“Times are tough at Lost Weekend Video! We’ve seen business suddenly drop by 30 percent just in the last few months, on top of the 60 percent hit we’ve already taken over the last few years. This has thrown us into pretty immediate crisis. We’d been working with an architect and the City to open a larger version of the Cinecave [Lost Weekend’s basement screening room/performance venue] in the back half of the main space upstairs, but have found that it’s impossible due to a combination of the layout of the building and Valencia Street business restrictions. That has left us pretty much out of options.”

The post went on to say the video store is “looking at the Le Video solution to keep us open” — i.e., hoping to bring in a co-tenant to share costs, as the Inner Sunset venue did earlier this year. “It’d be great to find something that fit in with our old school Valencia vibe and could provide an opportunity for someone who wouldn’t be able to afford Valencia Street otherwise.”

The post ended on a cautiously optimistic note: “We’re a year away from 20, it’d be nice to see it!”

Reached at Lost Weekend Monday afternoon, co-owner David Hawkins underlines the fact that business has been “plummeting.” As for the store’s immediate plans, “We’re basically just trying to figure out a way to stay alive at some level. We’re looking at doing something along the lines of what Le Video did, sharing the space. We’ve put out some feelers, and we’re getting some bites on it.”

A partnership with a record store is one possibility. “We’re looking for something that will sort of match what we’re doing somewhat, and keep that vibe alive.”

In general, though, “We’re exploring ideas now of how we could utilize part of our space to keep a video store open. That’s been our goal all along. We realize that you can’t probably sustain a full-scale video store in the city the way you used to. So it’s just a matter of trying to come up with the right formula.”

The cozy Cinecave venue has “done what we were hoping it would do,” in terms of bringing in audiences for screenings and comedy shows. But “video rentals have continued to fall off the map, moreso than we even anticipated.”

Though the decline of the video-rental biz is a nationwide trend, thanks to On Demand and Netflix changing the way consumers view movies at home, the ever-shifting Valencia Street landscape has also played a part in Lost Weekend’s fortunes.

“Like I tell people all the time, back in the old days when you moved, you found your record store, your video store, your bookstore. Those were the kinds of things you looked for in a neighborhood. And that’s not the case anymore. Things that can be shipped or digitally transmitted seem to be taken for granted as the way it’s gonna be — particularly as a younger demographic moves in that has not grown up utilizing these kinds of places. They have even less inclination to go seek them out.”

At present, Lost Weekend hasn’t yet gotten to the point of setting up a crowdfunding page, as Le Video did. Right now, Hawkins says the best thing that Lost Weekend supporters can do is realize “this is not just about video stores. This is about so many different kinds of retail that are going to disappear from all kinds of neighborhoods as this goes on. And if that’s the way that everybody wants to go, then that’s the way we’re gonna go. But if people stop and think about what’s cool about having some diversity of retail in your neighborhood — there’s something to be said about these kinds of places where you can just go in, browse around, and you don’t necessarily have to buy anything. It’s place to hang out and meet people, talk to people.”

“[People need to] come to the realization that you have to utilize these places. Go buy a record, don’t download it. Go buy something physical from your neighborhood, because otherwise that place is not gonna be there. That’s the main message that I think needs to be gotten out there.”

We’ll keep following this story and update the news on Lost Weekend as it comes. In the meantime, the Cinecave is screening World Cup matches and, as always, Lost Weekend’s vast library is available for all your rental needs. Stop by and RENT! VIDEOS! (Pro-tip: the staff recommendations will never steer you wrong.)