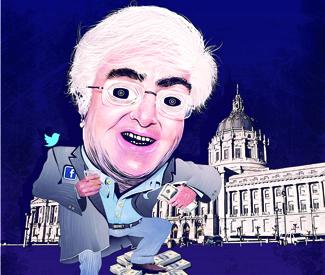 One week and one day — that’s how long Sen. Mark Leno has to push his Ellis Act reform bill through two committees in order for it to go before to the assembly floor, making its prospects for passage this year look dim.

The push would have been easier if it hadn’t lost yesterday’s vote, 3-4, in the Assembly Committee on Housing and Community Development. Now the bill’s passage is a herculean task that even Leno admits is a tough slog.

“I’d say it’s challenging,” Leno told us yesterday. San Franciscans have been displaced by real estate speculators, a dozen or more of whom are regularly “flipping” homes for profit and using the Ellis Act to clean out longtime renters. If passed, the bill would restrict the use of the Ellis Act to those who’ve owned their homes for five years or longer, allowing property owners to eventually get out of the rental business, as supporters of the Ellis Act say it was intended for.

“Bill Closing Ellis Act Loophole for San Francisco Fails in Assembly,” was the headline of Leno’s press release on yesterday’s action. But “fails” seems to imply a strong effort that fell short of the mark, when the reality of was that some of the bill’s highest profile and most powerful alleged supporters were missing in action: the tech industry and venture capitalist Ron Conway.

When Leno’s Senate Bill 1439 was announced in April, the “Godfather of Silicon Valley” Ron Conway stood before the microphone and cameras and announced the technology industry’s intent to protect tenants from being displaced by real estate speculators. Conway is a wealthy “angel investor” who cashed in big on companies like Twitter. Later on, he became Twitter’s greatest champion as he smooth-talked San Francisco government into providing big tax breaks to move Twitter into the mid-Market area.

In return, Mayor Ed Lee was counting on Conway and other tech titans to butress the other sectors of San Francisco, and to protect the people who were being evicted en masse.

Conway pledged as much when his tech group, SF.citi, started a petition drive to support Ellis Act Reform.

Part of the tech backlash occurring in SF right now is due to evictions by real estate speculators. Please help stop evictions in SF by having your Company sign on to the below letter for Senator Leno.

The bill would prohibit rental property owners in San Francisco of less than five years from invoking the Ellis Act, threatening to invoke the Ellis Act, or prosecuting an unlawful detainer (eviction) action based on the Ellis Act.

Real estate speculators are misusing California’s Ellis Act to evict long-term rent paying tenants, who have done nothing wrong but are casualties of a loophole in the Act that must be closed to prevent further displacement.

The Ellis Act was adopted to allow landlords to exit the rental business, not to give windfall profits to speculators willing to exploit the Act by entering the rental business just to exit it. These speculators are exploiting a loophole in the Act that allows them to buy a building and then immediately “exit the rental business” through mass evictions of low and middle-income tenants. The stories are heartbreaking, with families, seniors, and disabled San Franciscans losing their long-term homes.

We strongly support the passage of SB 1439.

Writing pretty words and posing for pretty pictures seemed to be the extent of Conway’s support. Meanwhile, the opposition built up its ranks.

At the committee hearing yesterday, lobbyists on behalf of the California Association of Realtors and very wealthy elderly folks told misleading tales of woe, crowding the room to convince the five California politicians to kill the Ellis Reform bill that would affect mostly just San Francisco.

“What we’re trying to do is keep honest, law-abiding San Franciscans in their homes,” Leno told the committee yesterday. But that wasn’t the committee’s concern. Ultimately, they were concerned about the bottom line. As Tim Redmond at 48hills reported yesterday, Committee Member Cheryl Brown, D-San Bernadino, said her brother told her the bill “is taking my property.”

Those who defended the bill were scant: Jeff Buckley of the Mayor’s Office, Dean Preston from Tenants Together, Sara Shortt of the Housing Rights Committee of San Francisco, and Committee Member Tom Ammiano, among others.

Perhaps having a wealthy tech giant in the room, say, a Twitter representative or Conway himself, may have tipped the scales in Leno’s favor. Conway’s frequent lunch partner Mayor Ed Lee even sponsored the bill. But still, no tech workers, no tech CEOs, not even someone glued to their iPhone raised their voices to defend tenants at the committee. Not even Conway.

When we called and emailed Conway for a response, all we received was an automatic reply saying “I am currently traveling will read email sporadically during this time.”

It’s too bad he wasn’t traveling to Sacramento.