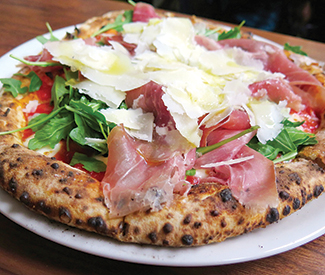 Now through July 13, a whole bunch of soccer fans are going to be coming into work late (sorry, there’s a 9am game!) or taking long lunches to get those noon games in. Fortunately there are a bunch of places to watch the Cup, in case your boss is getting suspicious of you hanging out in the conference room with your iPad. (For more suggestions, see the Pixel Vision blog at SFBG.com.)

A brand new sports bar has opened in the former Tortilla Heights space called San Francisco Athletic Club (1750 Divisadero, SF. 415-923-8989), and partners Miles Palliser and Ezra Berman of the Corner Store, along with Neil Holbrook of Kezar Pub, managed to open it just in time for Soccergeddon! There are 27 televisions, a 20-seat bar, pullout bleachers for big games, and you can even order a bathtub of beer if you’re sitting in one of the four reservable booths (which fit eight to 12). Pace yourself, sporto. Twelve to 16 beers come on tap, and cocktails too. The menu features an SFAC Burger with American cheese, a bacon-wrapped hot dog with caramelized onions and peppers, and Sriracha chili wings. Regular hours are Tue–Fri 11am–10pm, Sat–Sun 9am–10pm, and they’ll be open at 8:30am for the 9am games!

For a little bit of sun and a fun crowd, come to the SoMa Streat Food Park (428 11th St., SF. www.somastreatfoodpark.com), which is showing the matches on big screens for free! You can sit in the beer garden and enjoy Cup-appropriate specials — like Brazil’s Xingu Black Beer — and take your pick of vittles from a rotating roster of food trucks. Check the website for match schedule.

Recently opened Bartlett Hall (242 O’Farrell, SF. www.bartletthallsf.com) will come in handy for downtown workers: it’s open for morning games at 9am, with a bunch of screens and early treats.

Another new place to open is Minas Brazilian (41 Franklin, SF. www.minasbrazilianrestaurant.com) in the former Canto do Brasil space in Hayes Valley. So if you want to watch the games — there are LED screens — and party with some Brazilians (who wouldn’t?), here’s one place to find ’em. There will be plenty of cachaça, $6 caipirinhas during happy hour (5pm–7pm), and everyone’s favorite, pão de queijo (cheese bread). Open for early games; check the Facebook page for updates.

As for where to go to yell “IT-AL-IA!” with the Italians, you’ll want to head to Il Casaro (348 Columbus, SF. www.ilcasarosf.com) in North Beach, which has three TV screens, and lots of seats packed into the small space. The hotspot makes delicious Neapolitan pizzas, but Fri/20 it will be opening early for the 9am game and serving cornetti, bomboloni. You can get a cappuccino too. Forza Azzurri!

Looking for a spot to watch Mexico play? All four Tacolicious (www.tacolicious.com) locations will be showing all matches with Mexico (or USA) for the course of the Cup. When the US plays Germany on Thursday, June 26, Tacolicious will be open at 8:30am and serving brunch! Mmmm, huevos rancheros.

Meanwhile, over in SoMa, Don Ramon’s (225 11th St., SF. www.donramonsrestaurante.com) will be keeping you happy with plenty of food and drink specials, like $5 Micheladas all day. There are two large TVs, and they’re opening 11:30am Tue–Fri and 5pm Sat–Sun.

Also in SoMa is the sporty HQ Public House (24 Willie Mays Plaza, SF. www.publichousesf.com), which boasts multiple screens — just be sure you’re not there when a Giants home game is happening, it could be a little crazy.

The Lower Haight is full of soccer-loving bars, like Mad Dog in the Fog (530 Haight, SF. www.themaddoginthefog.com), Danny Coyle’s (668 Haight, SF. www.dannycoyles.com), or you can head to the Upper Haight to Kezar Pub (770 Stanyan, SF. www.thekezarpub.com). And you’ll definitely find some Brits at the new Gashead Tavern (2351 Mission, SF. www.facebook.com/gasheadtavern) in the Mission. Gashead sports three TVs and one 100-inch projector, and is opening early to serve breakfast sandwiches all week starting at noon, and weekend brunch starting at 11am. Two words: full bar. Score!