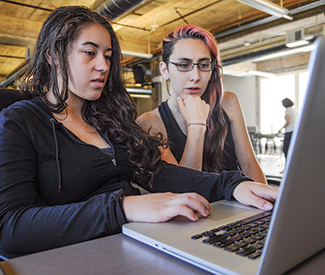 Programmers-in-training line the work tables at HackReactor, a software engineering boot camp many in the tech community call a “university disruptor” due to its speed in training coders. Those hunched over computers are typing their way toward a goal: joining the ranks of the 12-week course’s alumni, now employed at tech companies like Adobe, Beats Audio, Pandora, and Hipmunk. But walk past the rows of intensely driven (yet casually dressed) engineers and you’ll also encounter the program’s unlikely new trainees: San Francisco high school students.

Tech company HackReactor and nonprofit Mission Bit are co-training San Francisco Unified School District students for the summer, and throwing them into the trenches with pre-professional engineers.

Soon, these students will be proficient coder kids.

“Mission Bit gave us our first understanding of what javascript was,” Gisela, a 17-year-old Lowell High School student told us. “Hack Reactor said ‘now make a game,’ and threw me into the code.”

The free program is a new extension of Mission Bit’s after-school coding classes, offered this year at Mission High School, a SFUSD public school, and Lick Wilmerding High School, which is private. The semester program is paid for by tech companies: mainly WeChat (Tencent America), with in-kind sponsors including Salesforce, HackReactor, DeNA, Brightroll, AdRoll, Rackspace, co.lab, and Tagged. The summer program is fully paid for by HackReactor.

It also comes at a crossroads for San Francisco: Its communities of color are being priced out just as its tech industry is searching for ways to enroll more diverse workers.

Though many pin the displacement problem on the rising cost of housing, there’s also another less-spoken-of culprit: Local tech companies draw many applicants from around the world to fill jobs instead of hiring local residents.

This may be due in part to lack of trained prospective employees locally.

There’s a broken education pipeline between local schools and the tech sector, both sides admit. The new effort by Mission Bit and HackReactor may be a first step towards plugging the leak. If the program is successful, subsequent iterations may establish the first stable pathway to technology sector jobs for San Francisco students.

Though the intern program is still in its beta phase, it shows much promise, and comes at a dire time for the city.

The summer coding program may hold solutions for three problems that coexist simultaneously: displacement of communities of color, the tech sector’s shocking lack of diversity, and the SFUSD training gap.

The city’s Mission District, often pointed to as tech workers’ most desired neighborhood, saw 1,400 Latinos leave between 1990 and 2011, while its white population grew by over 2,900, according to a recent study by Causa Justa, Just Cause.

The tech industry has a complementary problem: Google recently revealed its employees are 70 percent men and 61 percent white. Just five percent of Google’s workforce is black or Hispanic. Though the Asian population is 30 percent of its workforce, that’s still out of line with the significant Asian presence in the Bay Area.

Sources tell us Google puts heavy effort into diversity recruitment and likely had better percentages than the rest of the industry. Google claimed in myriad news reports that potential employees of color were difficult to find.

But SFUSD’s 52,000 students are 25 percent Latino, 41 percent Asian and 10 percent African American, so why not recruit students from our diverse local public schools, bolstering San Francisco’s flailing middle class at the same time?

That brings us to our last problem. Until recently, the SFUSD only taught computer science in three of its 17 high schools: Balboa, Galileo, and Lowell. There’s a tech training gap in San Francisco, making the leap for SFUSD students to the tech sector all the less likely.

The SFUSD is now taking steps to rectify this, but the change will take time.

“SFUSD sees teaching coding, digital literacy and computer science as critical to preparing our students for success,” SFUSD spokesperson Gentle Blythe told the Guardian. “We have a long-term plan in place for how we are phasing in teaching computer science, including coding, throughout a student’s K-12 career.”

But in order to really tackle the gap, SFUSD teachers and students will need hands-on training with coders and software engineers. That’s where Mission Bit and HackReactor come in.

Daugherty was on the business side of tech, starting his first company in 1999. After moving to the city he wanted schools where his children, ages 5 and 2, could one day train to join his industry.

“I became incredibly frustrated with what I was finding in public schools,” he said, sitting with us in HackReactor’s Market Street office. “These kids are learning fundamental material in science and math, but there’s a disconnection to application and purpose.”

Mission Bit was born, with a simple objective of increasing coding education in local schools.

Gisela’s Lowell High School classes were rigorous, she said, but while programming her first game she relearned physics all over again.

“I’m making a game where each player has a ball, they bounce against each other to bounce the player into the hole,” she told us. Her technical mentor, Kwyn Alice Meagher, gave her a physics crash course to get the ball to bounce just right.

“[In school] I learned the logic of physics but not the application,” Gisela said. “Now that I understand the purpose of learning it, I’m figuring it all out.”

The students start at Mission Bit learning HTML, Javascript, CSS3, Ruby, SQL and Sinatra, with instruction provided by volunteers from local technology companies. Daugherty told us over 60 volunteers emailed Mission Bit after they reached out for potential teachers, and the nonprofit could only utilize 30. Those additional volunteers will get a chance to teach students in the upcoming fall after school program.

Once students “graduate” Mission Bit it’s time to join the workforce. Gisela and two other students jumped to an internship at HackReactor, where they’re putting their coding knowledge to practical use.

Isaac Zimmern, a graduating Lowell senior, is one of those other students. He celebrated working side by side with mentors while he programmed, inspiring him to pursue computer science in college.

And though Gisela and Zimmern are both from Lowell, many schools were represented in Mission Bit’s program. In one office a group of about a dozen students sat at computers, programming Android phones to play a simple game resembling “Doodle Jump.”

They hailed from a myriad of schools: Raoul Wallenberg, Balboa, Lowell and more. Douglas Mejia, 18, let us see his “Doodle Jump” clone. Its theme music popped on loud, singing “I ain’t sayin’ she’s a gold digger, but she ain’t messin’ with a broke — — -,” and on-screen Kanye West hopped from platform to platform.

Mejia smiled proudly as he showed us his game. He said he wasn’t interested in making games while in school, but Mission Bit turned him into a believer. Now he’ll study computer science at the University of San Francisco.

Mission Bit’s class body is 8 percent African American, 24 percent Latino, and over 50 percent Asian, according to the company’s internal data (that’s in line with SFUSD’s own demographics). Nearly half of the students come from the south side of San Francisco, around the Ingleside District.

The program is still small, but Daugherty says it’s designed with scalability in mind. There’s potential for these students to one day not only fill tech’s diversity gap, but to allow tech jobs to be filled by San Franciscans, born and raised.

But Daugherty says such goals are secondary. The focus is on the students.

“The industry has a very specific agenda about where they want their engineers diversified,” he said. “If this is where our students want to go, we’ll support them. But there are other paths to take.”

Students can use their programming skills in many jobs and industries, he said, not just tech.

Still, the students will have an opportunity to visit local tech companies Square, AirBnb and others, meeting engineers who one day may be peers. Daugherty calls these people “touch points,” making social contacts for mentorships and job seeking that blue-collar SFUSD students may not have themselves.

Ultimately, the program “lets you get programming skills without going through the money filtering step of a university,” said Anthony Phillips, CEO of Hack Reactor. Counter to the belief in pure meritocracy many in tech swear to, Phillips acknowledged he had help: his brother, a Twitter employee. When Phillips first learned code and started to fumble, his brother told him “you’re so smart, but so dumb. Just keep doing it.”

So Phillips aims to do the same for the students at HackReactor. He’s like a coach in the corner for new boxers taking their aim at advanced coding skills.

“Not everyone has someone there that can say, ‘just keep doing it,'” Phillips said.

Now these students do.