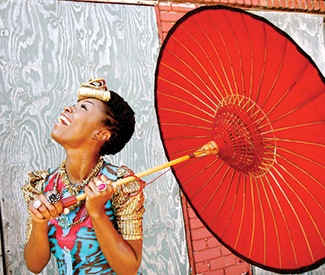 LEFT OF THE DIAL For Zakiya Harris, creativity has often grown out of loss. An Oakland native, Harris grew up singing in choirs, but “never really considered it a feasible career route,” she says. It wasn’t until college, when several people close to her passed away within the span of a couple years, that she began to pour herself into songwriting. “The music just started coming,” says the singer, teacher, and community organizer.

More than 15 years later, music acted as a lifeline yet again, and the result is Adventures of a Shapeshifter, Harris’ debut EP as a solo artist, out June 14; she’ll celebrate with a release show that same night at Oakland’s Awaken Cafe. With a mix of pop, hip-hop, electronic elements, and African-inspired percussion laying down a base for Harris’ soulful voice — it’s no surprise to hear her say she truly found her musical footing in Brooklyn, around the time The Roots were taking off — Shapeshifter‘s liveliness and joy hardly hints at the fact that, had the singer’s world not been totally shattered the year before, the record might not exist.

First, the nonprofit organization Harris ran lost its funding when she and her husband were a year and a half into buying their home in West Oakland; the organization collapsed, and the couple eventually lost their home. They divorced soon after, a split that took Harris away from the band and musical circles she’d been part of with her husband — notably, the established hip-hop crew Fiyawata — for the last 10 years.

“I was a wife, a homeowner, and a businesswoman, and then overnight everything shifted. All of a sudden I was a statistic — a single black woman, a mother, and I didn’t have a job,” says Harris. “Music was my solace, the place I went to express all the challenges I was going through, and try to channel all that energy into something.”

She recorded the bulk of the EP in a makeshift home studio — quite literally, using ProTools in a closet in her new apartment, she says with a laugh. “I got beats from different producers and just sang my heart out.” This was in the early days of Oakland’s Art Murmur, and Harris began performing these songs to the crowds that would gather on First Fridays. “I did a residency in the streets,” she says. “I was rebuilding my fan base, and I met a lot of new musicians, allies, local promoters that way.” Other East Bay bands like The Seshen and Bells Atlas became friends and collaborators; Harris eventually recruited the musicians that now make up her band the Elephantine.

As for the EP, Harris says it’s something of a coming-out for all of her identities, a statement about what it’s like to be a mother, musician, teacher, organizer, and businesswoman. It’s been a big few years: She has her hands in several nonprofits, co-founded a technology program for low-income youth of color, and was recently named director of the Bay Area Hive Learning Network, a social change laboratory.

“I went to law school, I became a social entrepreneur, and I’ve also been doing music my whole life,” she says. “This project is the first time I’ve been able to represent all my roles authentically. For a long time I felt ashamed of it, like I wasn’t doing my music family a service or my business a service, or being a mom. This record is about me realizing, we can do what we love, and we can be bold about it, and not feel ashamed about it.”

“You don’t have to cut off who you are, keep those roles so separate,” she adds. “In fact, the world is a better place when you don’t.”

Trying to make it as a musician in San Francisco arguably requires a certain amount of stubbornness — if not starry-eyed hope and obliviousness, at least a determination that you’re not going to let cynicism and the high cost of rent get the best of you, and you’re not going to measure your own worth by any rubric that involves commercial success. Johnny Major has that determination, but to hear him tell it, he also has no choice.

The singer and frontman of Adios Amigo — a jangly/moody indie pop outfit that started as a side project, as Major also drums for SF scene veterans Il Gato — has learned the hard way that not making music is simply not an option.

“I can’t live without playing music,” says Major simply, a week or so after releasing the band’s third EP in three years. Erasable Truth is a bright record with some disillusioned lyrics, a contrast that plays with the relationship between staying hopeful and getting jaded, between melancholy and introspection and positivity and focus. All of it has somehow been funneled into warm, horn-punctuated little gems of very sweet pop music. Comparisons to Built to Spill and Broken Social Scene (certainly, at least, the moods induced by listening to the latter) are apt.

“I think in comparison with the other EPs, it’s a little more jaded,” allows Major. “It’s darker, there are some strains of sarcasm.” He note that the band’s lineup has shifted, dissolved, re-formed and dissolved again over the course of the band’s four-year lifespan. That was part of the inspiration for the record’s title — the idea of coming to terms with the fact that “there is really no sense in trying to hold onto things, to finding truth…all you can really do is try to make sense of life on the fly, and try to seek a medium of expression that’s satisfying, that allows you to connect with other people.”

“I’ve been playing music in the Bay Area for six years in several projects, and I have a ridiculous amount of time and money invested, and having to have a day job when all you really want to do is play music, especially in a city this expensive…it’s a constant struggle with disillusionment,” he elaborates. “You do get to the point of, ‘Why the fuck am I doing this?’ But I can’t give up, regardless of how illogical it might be. It’s a spiritual thing for me — you gotta feel alive, you gotta feel passionate. And there’s a certain one-ness I only get from playing music.”

A handful of other new releases from local bands that have gotten more than one spin in my, um, virtual Discman:

K.Flay, the unassuming-looking rapper/singer/Stanford alum who formerly called SF home (these days she’s bouncing between coasts), has finally released a full-length, Life As a Dog, after freeing herself up from her former label. I just met with her in Oakland the week before the record dropped; check this space next week for a full-length interview.

Monster Treasure, self-titled LP, out June 2 on Harlot Records: Lo-fi, lady-fronted, melodic garage fuzz-punk from Stockton. This three-year-old trio has a handful of sweet EPs to their name, but this studio debut should take them to the next level; they put on a hell of a show at SF Popfest in May, and are currently touring the Pacific Northwest. Check www.facebook.com/monstertreasure for more.

No Worries, the debut LP from SF’s barely year-old rockers WAG, doesn’t sound like a debut LP. Singer Lucas Nerlva’s vocals have a natural Julian Casablancas-esque snarl to them, paired with hard-driving guitar hooks. Worth keeping an eye on. They’ll hit Thee Parkside Aug. 7 with Coo Coo Birds and The Singles; check www.facebook.com/wagband for more.