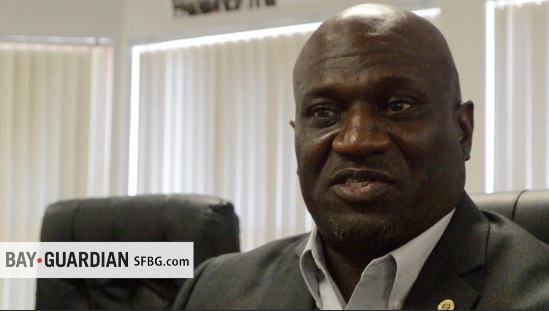 It’s fair to say San Francisco is sick of the sickout.

Just as Herrera announced his intentions, the Bay Guardian sat down at the Transit Workers Unit local 250-A for an interview with Eric Williams, president of Muni’s worker union.

Here are William’s answers to our questions. Pick up a copy of next week’s paper for a broader story on the Muni sickout and union backlash in San Francisco.

San Francisco Bay Guardian: Thanks for sitting down with me. This is obviously a contentious time for Muni workers. But let’s hear how this all started: What’s the nitty-gritty contract disagreement between the SFMTA and the union?

Eric Williams: We don’t have a problem paying our pension, despite what’s being said. We would like a fair even swap, just like everyone else had. The police, the fire department, every union in this city got a fair swap to help pay their own pension. Right now they want to offer us a bump to pay our own pension, but once we got our CPA to crunch the numbers, it’s all negative.

The city wants you to beleive it’s cost-neutral, but that’s not the case. Our members will be making $1.10 less an hour due to this negotiation.

SFBG So you’ve said before that certain laws and codes have “stacked the deck” in negotiations against the union, in favor of the SFMTA. How does that work?

EW You have to read Prop G [regarding Muni operators’ salaries] and code A8.409 [prohibiting strikes] and say “is this fair?”

We’re struggling, we’re coming into a negoatiaion with our hands tied behind our back. The beauracracy and the spinning of the words and statements is alive in the agency.

It’s unfortunate the public thinks it’s the common workers’ fault on any of these issues. Our members have to take care of our families, our children, paying for college, just like you.

[Proponents of Prop. G said] “Well, it will make everything fair.” Actually, it’s not.

A ten-minute video interview with TWU Local 255-A President Eric Williams, as he explains the motivations behind the sickout.

SFBG Let’s get into that a bit more. So you walk into a negotiation, you bring a proposal. The way most union negotiations work is two parties sit down and present proposals, but the Muni worker/SFMTA negotiation is unique. You have to prove something to the arbitrator. What do you have to prove?

EW Basically, we have to show we’re not going to be costly to the agency. But inflation is going up, how could we not be costly?

The arbitrator must side with the city if they feel the cost burden will be too high on the city. All SFMTA employees are under the same deal. I’ve been at four tables in the past few months and negotiated two contracts with parties other than the SFMTA. We had to go to mediation, those mediators told us to talk it over again (offering compromise). You take this proposal, you take this one. That’s not the case with the SFMTA negotiations.

SFBG Can Muni workers afford to live in San Francisco?

EW Definitely not. The only members that live inside the city are those who purchased a home 20 or so years ago. The majority of our members live outside the city. That’s what leads to the issue of transportation and parking. If you’re pulling a bus run at 5:30 in the morning, guess what, there’s no bus at 4am to get them there. They need parking. It’s poor or rich in this city, there’s no in between. That’s no secret.

SFBG How far back would you have to go to say a good strong bloc of members lived in the city?

SFBG Let’s talk about the atmosphere with riders out there. We recently saw a BART strike, did you take a read on the reaction? The sickout, which seems similar … people seem to not be siding with the union on this. There’s a lot of animosity.

EW We thought people understood who were in charge of the economics. It’s unfortunate the public may believe it’s the common workers’ fault on the issues.

If you look at the bargaining with BART, yes it caused frustration. Yes it did. But when you see them empathizing with the power, “yes we know this hurts, but we have a family too.” The only thing we can do is ring the bell and say “this is unfair.”

SFBG Do you feel there is a backlash against Muni workers for the sickout?

EW Honestly i couldn’t tell the difference, we’ve been drug over the coals for so long. The frustration you’ve seen the past few days, not brought by the union itself, but by the members, is real.

But in reality our members encounter something different with the everyday riders. The mothers, the fathers, [they have] a different attitude. Of course we have that 10, 20 percent that no matter what we do, who say we’re wrong. But we have to take a stand as well. We’re important here. We take our jobs seriously, and we should be treated as such.

Those 10-20 percent [who disagree with the workers] need to read the charter. Any person with common sense, any person with a heart, ask themselves if that process is fair.

SFBG You don’t think part of it is the view that Muni workers make much more than private sector workers?

EW There’ve always been good private sector employers out there. But unions got us weekends, unions got us better working hours, unions got you sick leave. But go out and ask how they feel, what they think the public’s issue with us because we’re making $60,000 a year, and you went to college for four years. Maybe it’s because we’re making a living, and you’re struggling. Well hey, come get a job as a bus driver if it’s that bad out there.