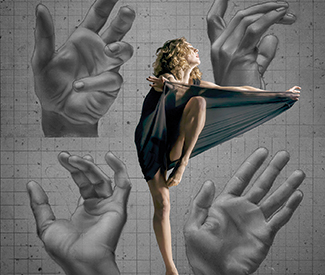 DANCE The third Walking Distance Dance Festival — basically three programs of two pieces over two days — was modest in scale. Audience members may have traveled only half a block between venues for this fringe-style event, yet as curated by ODC Theater Director Christy Bolingbroke, these short trips became adventures.

Running through the festival was a simple question: What do we do with what we have? Dance works used to be considered moments in time that left behind only fading footprints. No longer. Dance historians have unearthed huge chunks of the past, and the Internet, with YouTube at its core, opens much of it at the click of a key. Besides, like it or not, the past is part of who we are. We can’t get away from it.

In the festival’s opener, the question for Lionel Popkin became how he, with an Indian mother, was supposed to look at Ruth St. Denis, the pioneering modern dancer who dabbled in what she saw as Indian dance. With the brilliant and sharp Ruth Doesn’t Live Here Anymore, Popkin attacked the complexities of these issues with humor, much of it self-effacing, and vigorous dancing for himself, Emily Beattie, and Carolyn Hall. They pushed along the floor and rolled over each other; they also dived into the unholy mess of St. Denis’ fixation on veils as they subverted her pedantic instructions for Nautch, her most famous work. Master accordionist Guy Klucevsek’s score, performed live, was superb.

The festival ended with Amy O’Neal’s cheekily titled solo The Most Innovative, Daring, and Original Piece of Dance/Performance You Will See this Decade. O’Neal is a stunningly captivating performer who slides in and out of hip-hop, club, modern, and even some balletic dancing. She may have been alone on stage, but with her are Dorothy’s red slippers and choreography from music videos by Ciara and Janet Jackson, freely adapted but still recognizable. An accompanying projected text addressed issues of influences (borrowed, stolen, honoring, or accidental) on the creative process. Make them your own, O’Neal asserted. She did.

So did Doug Elkins Choreography, Etc.’s high wire comedy act Hapless Bizarre, in which voguing and musical theater ran smack into vaudeville and physical clowning. The superb Mark Gindick played the clueless outsider who wormed his way into an haute monde — in every sense of that term since all but one of the other performers towered over him. Starting with an elaborate hat trick, the dancers marvelously picked up on voguing’s haughty and competitive struts and poses. As Hapless moved on to romance, the intensity of pratfalls, rejections, and increasingly hopeless entanglements become even more frantic. Glad to say that Gindick finally got the girl.

At ODC, Show, inspired by Charles Moulton’s drawing of hand gestures that were projected as a backdrop, looked tighter and more focused. Hand gestures — so often neglected in Western dancing — came into their own. They poked, touched, and reached. With the dancers stacked on pedestals, their fingers resembled trembling butterflies. But the hands also lifted and carried three of the musicians in a funeral procession, leaving an elegiac cellist behind.

Show offered marvelously full-bodied and fluid dancing with phrases that flew, sank, or simply disappeared into the wings. Nol Simonse injected a comedian’s touch into his duet with Dudley Flores. Newly blond Vivian Aragon, a fiercely balletic dancer, attacked every move as if it were her last. No wonder she could grab and lift Simonse like a puppet.

Show was paired with an excerpt of Bhakti: Women’s Liberation of Love by Kathak dancer Rachna Nivas, in which she attempted to portray Hindu mystic and poet Meerabai as a proto-feminist. An exquisite dancer with a refined sense of rhythmic acuity who is well-schooled in male-female roles, Nivas charmed as the girl devoted to Krishna, but her telling of other aspects of Meerabai’s life needed more complexity.

The festival’s most haunting dancing came from Headmistress dancers Amara Tabor-Smith and Sherwood Chen. Shame the Devil explored the process of what Tabor-Smith calls becoming a crone. Hopping in place and becoming very still, her intensity mesmerized as she called up several lifetimes’ worth of states of being. She should, however, ditch her auxiliary performers.

Mummified in layers and layers of clothing, Chen’s Mongrel channeled Dervish dancing — until he stripped down to acquire a more authentic but also more vulnerable identity. Though it’s a borrowed metaphor, Mongrel convinced because of the rigor and consistency that Chen imposed on his dance making. Replacing Moroccan with Brazilian music, however, seemed just a touch too simplistic. *