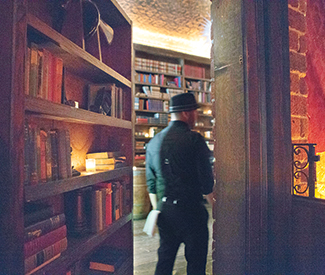 He had me there. Bourbon & Branch has a few secret rooms that open up when you do various Hardy Boys-esque actions. It’s one of the bar’s many charms. When it opened in 2006, there were no mustache bars in San Francisco. You know what I mean by mustache bars — the ones where a bow tie and suspender wearing, mustachioed man squeezes tiny tinctures into your drink from a utensil clearly invented by alchemists. They are omnipresent in current-day San Francisco but when Bourbon & Branch opened, it was the first one in the city.

At this point, anyone who spends a lot of time in bars is pretty tired of cocktails that are too precious and take too much time, and most of us are waiting for the backlash when places go back to specializing in a shot and a beer. But the thing that makes Bourbon & Branch great is that, while it can take a lot of credit for kicking off the pre-Prohibition cocktail craze in San Francisco, it still does it better than any of them. Why? Because of it’s attention to detail.

They say you’ll always remember your first one. But often times your second one is far better. The first speakeasy style bar I went to was Little Branch back when I lived in NYC, and it was cool. But it wasn’t until I moved back to San Francisco that I saw the trope played out to its full potential. Walking into Bourbon & Branch that first time in 2008 made the history nerd in me squeal. It felt like a real speakeasy. It was full of dark wood and was low lit by candles and a chandelier. Bartenders in ties and fedoras shook things vigorously while making cocktails that hadn’t been popular in half a century. People were only served if they were seated and they were encouraged to speak quietly.

And then I got to the backroom where suddenly the bookshelf opened and an entire other bar was laid out before me, filled with people drinking similarly well-made drinks while laughing and talking loudly. “Where the fuck am I,” I asked myself before realizing I couldn’t afford the place and leaving out the backdoor.

So a few years ago when Anthony said he wanted to go here for his birthday my first reaction was, “Motherfucker, why are we gonna go somewhere with $12 cocktails when you don’t even drink?” His answer was relatable to any of us who have ever dreamed of traveling through time or going on the kind of adventures you only see in movies or read about in books. He wanted to go through the secret passageway and spend time in a San Francisco that no longer exists.