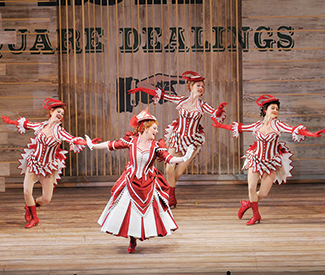 THEATER Jerome Kern and Oscar Hammerstein II’s groundbreaking 1927 musical, Show Boat, transformed one of Broadway’s major theatrical forms from a light and episodic operetta-style divertissement into a red-blooded American art form. Wedding spectacular entertainment (its producer was none other than super-showman Florenz Ziegfeld) with a full-fledged drama, Show Boat‘s expanded canvas came nearer the realm of classical opera, as all elements of the production, beginning with the music, orbited tightly around the story — which in addition to humor and hijinx sported complex characters and serious social content.

Since 1927, opera and musical theater have continued to grow closer at various points — most famously in the work of crossover composers like George Gershwin and Leonard Bernstein. San Francisco Opera’s co-production of Show Boat, the first time the company has essayed the legendary musical, turns out to be a wonderfully successful case in point: a crowd-pleasing hybrid of musical-theater style, sharply delineated drama, rousing choreography (from Michele Lynch), and full operatic glory (including an appropriately-sized orchestra and chorus). It’s a muscular production with a light step and buoyant spirit that shows off the best in a story that not only affirmed a common humanity among those up and down the ladder of social status, but also registered the injustice and violence of the American racial caste system in tones boldly progressive for the time.

Of course Show Boat, for all its socially and artistically progressive aspects, was still a product of the 1920s. And while it has been revived many times, the dialogue and other details have also undergone revisions to keep pace with social attitudes, conventions, and sensitivities, especially with regard to race. The SF Opera production under Maestro John DeMain follows DeMain and General Director David Gockley’s former collaboration on the historic 1982 revival for the Houston Grand Opera, which restored for the first time since 1927 significant sections of the original dialogue and score. The opera opens on a beautiful riverside quay awash with Technicolor hues (in perhaps indirect homage to the 1951 MGM film version), while the backside of the ship rises from the stage at the War Memorial Opera House like a delicate three-layer cake in the first of set designer Peter J. Davison and lighting designer Mark McCullough’s consistently atmospheric scenic environments.

Based on the 1926 novel by celebrated author and Algonquin wit Edna Ferber (who with frequent collaborator George S. Kaufman brought The Royal Family to Broadway the same week that the musical version of Show Boat set sail), the story spans the 1880s to the 1920s and revolves around the crew and passengers of the Cotton Blossom, a Mississippi show boat plying the river’s shoreline inhabitants with melodrama and comic fare. The boat’s operator is the warm-hearted Cap’n Andy Hawks (played by Broadway and local legend Bill Irwin in a memorable SF Opera debut) and his wife, the pants-wearing disciplinarian Parthy Ann (a comically fierce and ultimately redeeming Harriet Harris). Their innocent daughter and the story’s heroine, Magnolia (played with affecting pluck by a radiant Heidi Stober, the fine American soprano), falls for a rakish riverboat gambler named Gaylord Ravenal (baritone Michael Todd Simpson in a suave and graceful performance), whom she weds and follows to Chicago.

Magnolia and Gaylord’s doomed marriage, but enduring romance, makes up the central storyline, while a significant secondary plot involves the downward career of the talented actress and singer Julie La Verne (given a sultry and wrenching interpretation by soprano, and esteemed SF Opera regular, Patricia Racette). In an early scene, Julie’s husband, Steve (Patrick Cummings), fights with his wife’s spurned suitor (James Asher) and the latter takes revenge by tipping off the local sheriff (Kevin Blackton) to the illegality of their marriage under the state’s anti-miscegenation law. In this way we learn that Julie is of mixed-race ancestry. A bickering but loving African American couple among the Cotton Blossom‘s crewmembers, Queenie (the regal soprano Angela Renée Simpson) and Joe (bass Morris Robinson in a robust, beautifully measured performance), are also significant supporting characters. Indeed, the most of the show’s great songs are associated with these secondary characters, not least “Ol’ Man River” and “Can’t Help Lovin’ Dat Man.”

The show itself strikes a knowing stance with respect to narrative, making good fun of the stilted melodramas put on by Cap’n Andy while reveling in the backstage intrigue and the characters’ own double-playing onstage (a situation that nicely serves the woo-pitching in the number “Make Believe”). Even the fight that breaks out on the dock between Steve and Pete at the outset of the play gets co-opted by Cap’n Andy, who in a hasty bit of diplomacy tells the crowd it was just a preview of the night’s entertainment onboard. This covering is also an uncovering, however, since it hints at the complex relationship between the stories onstage and real life in all its messiness.

Of course, what “real life” the musical expresses is still very much idealized as well as stylized. But the SF Opera production proves there’s still a pulse to the 1927 narrative, and it’s as vital as the enduring score with which it’s intimately bound. With panache but also keen sensitivity, the show conveys Ferber’s original emphasis on the shared humanity of rich and poor, white and black, and the compassion a bird’s eye perspective on it all can breed. In Show Boat, absurd melodramas and life’s everyday triumphs and failures play out alongside each other as so many ripples on the surface of a deep and indifferent river — a dark and mysterious universe that, in the image of the show’s great recurring theme, just keeps rollin’ along. *