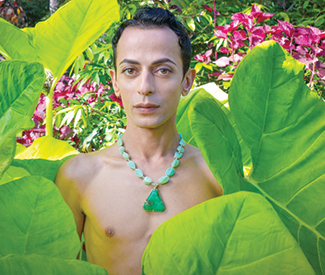 You’d be hard-pressed to have such a hard time at our own SF DocFest, however. For 13 years it’s managed to emphasize the entertaining and eccentric over grim reportage. To be sure, the latest edition, opening Thu/5 (with programs primarily at the Roxie and Oakland School for the Arts) has its share of films on topically important subject themes. Centerpiece presentation The Internet’s Own Boy: The Story of Aaron Swartz poignantly recalls the short history of the brilliant young programmer-activist whose fate is especially chilling given the potential imminent death of net neutrality. Of Kites and Borders examines the harsh lives of children in the Tijuana area; Goodbye Gauley Mountain has Bay Area “eco-sexuals” Annie Sprinkle and Beth Stephens uniquely protesting the mountaintop removal industry in the Appalachians. But among 2014 SF DocFest’s 40 or so features, only Ivory Tower — about the increasingly high cost of higher U.S. education — offers straight-up journalistic overview of an urgent social issue.

More typical of DocFest’s sensibility are its numerous portraits of peculiar individuals and even more peculiar obsessions. In the jobs-make-the-man department, there’s An Honest Liar, whose magician subject The Amazing Randi has made it his personal mission to expose those who’d use his profession’s tricks to defraud the vulnerable; The Engineer, profiling the sole criminologist working in gang crime-ridden El Salvador; Bronx Obama, in which one man’s uncanny resemblance to the POTUS sets him on a lucrative but discomfiting career of impersonation for (mostly) audiences of hooting conservatives; and Vessel, whose protagonist Dr. Rebecca Gomperts sails the world trying to make abortions available to women whose countries ban the procedure.

There are no less than three features about people trying to succeed among the professionally tough: Fake It So Real (the South’s independent pro wrestling circuit), Bending Steel (a Coney Island performing strongman) and Glena (struggling mother hopes to hit paydirt as a cage fighter).

Another legendary moment is remembered in Led Zeppelin Played Here, about an extremely early, ill-received 1969 Zep show at a Maryland youth center that few attended, but many claim to have. Portraits of artists expanding their forms in the present tense include Trash Dance (a choreographer collaborates with truckers and their big rigs) and When My Sorrow Died (theremin!).

Exerting a somewhat wacked fascination is the cast of We Always Lie to Strangers, which is somewhat spotty and unfocused as an overall picture of tourist mecca Branson, Mo. — Vegas for people who don’t sin — but intriguing as a study of showboy/girl types stuck in a milieu where gays remain closeted and Broadway-style divas need to keep that bitching hole shut 24/7. Further insight into your entertainment options is provided by Doc of the Dead (on zombiemania) and self-explanatory Video Games: The Movie.

One pastime nearly everyone pursues — looking for love — gets sobering treatment in Love Me, one of several recent documentaries probing the boom in Internet “mail order brides” from former Soviet nations. Its various middle-aged sad sacks pursuing much younger Eastern bombshells mostly find themselves simply ripped off for their troubles. Those looking for quicker, cheaper gratification may identify with Back Issues: The Hustler Magazine Story.

Of particular local interest is the premiere of Rick Prelinger’s No More Road Trips, culled from his collection of nearly 10,000 vintage home movies. A preview screening of First Friday offers a first peek at this forthcoming documentary about tragic violence at the monthly arts festival in Oakland last year. True Son follows 22-year-old Michael Tubbs’ attempt to win a City Council seat and reverse the fortunes of his beleaguered native Stockton. The “Don’t Call It Frisco!” program encompasses shorts about the Bay Bridge troll, a Santa Rosa animal “retirement home,” and a salute to South Bay hardcore veterans Sad Boy Sinister.

DocFest ends June 19 with that rare thing, a documentary about downbeat, hard-to-encapsulate material that’s won considerable attention simply because it’s so beautifully crafted and affecting. Andrew Droz Palermo and Tracy Droz Tragos’ Rich Hill focuses on three kids in worse-than-average circumstances in a generally depressed Missouri town of 1,400 souls. Harley is an alarmingly temperamental teen housed on thin ice with his grandmother while his mother sits in prison for reasons that explain a great deal about him. Potty-mouthed Appachey is a little hellion perpetually setting off his exasperated, multi-job-juggling single mother, living in near-squalor.

Still, both are at least superficially better off than Andrew, an almost painfully resilient and hopeful boy constantly uprooted by an obscurely damaged mother and a father who can’t hold a job to save his life. “We’re not trash, we’re good people,” he tells us early on, later rationalizing his continuing dire straits with “God must be busy with everyone else.” He’s the heartbreaking face of a hardworking, religious, white American underclass that is being betrayed into desperation by the politicians who claim to share its values.