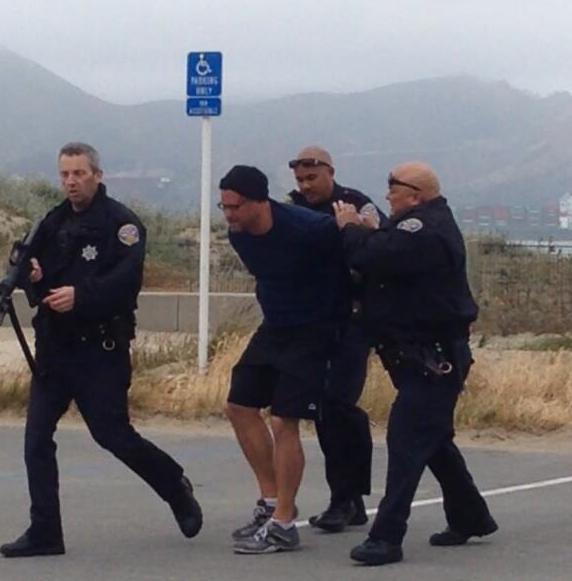 San Francisco Police Department Officers took San Francisco political insider and PR consultant Ryan Chamberlain into custody on June 2 in the area around Crissy Field, media outlets are reporting. Chamberlain was targeted by the FBI on June 1 for alleged possession of explosive materials, and became the subject of a nationwide manhunt after federal agents equipped with a Hazmat team raided his apartment in Russian Hill.

Before apprehending Chamberlain, SFPD officers were securing the area around San Francisco’s Crissy Field, according to the communications on live radio broadcasts.

“More units are coming down we’re getting everyone out of here,” a voice said over the police scanner around 6:20pm. “I got the phone numbers of those FBI agents. We need assistance clearing the parking lot.”

“On-duty EOD units, come up on the air for the Crissy Field situation,” another voice said over the police scanner around 6:30, referencing the department’s explosive ordinance disposal unit.

Phillip Hirsch, a bystander, took this footage of Chamberlain’s arrest.

.@SFPD at scene of potentially arresting #RyanChamberlain: “Got the phone numbers of those FBI agents..need assistance clearing parking lot”

SFPD units are confirming each others’ locations via radio now, securing perimeter of blocked off Crissy Field area. #RyanChamberlain

Despite releasing a note on iCloud that was widely interpreted as a suicide note, Chamberlain appeared to resurface on Twitter earlier this afternoon in a post rejecting the FBI’s allegations against him as untrue.

His friends, many of whom are well-connected political insiders who work on election campaigns in San Francisco, were taking to social media to cast doubt on federal authorities’ case against him.

Political consultant Johnny K. Wang, who described himself as a friend of Chamberlain’s and said he’s known him for years, expressed doubt that he was capable of domestic terrorism.

“I truly believe that once the [FBI’s] cards are shown, they’ll have nothing,” Wang said. “I would like to see what they have. If there were actual bomb making materials, then yeah, that’s something. It better be a bags of fertilizer or something. He’s a well-connected, well-loved guy in the community. If [the FBI] just ruined his life … I’m pretty sure the FBI will be made to pay for this. They’re going to be made to pay for this. It’s unacceptable. I want to see some real bomb making materials. I want to see a car that’s rigged to explode. Because otherwise, it’s just accusations.”

Now that Chamberlain is in custody, maybe the FBI will offer some answers.