Home Pink Mountaintops get weird at The Chapel
SectionNoise 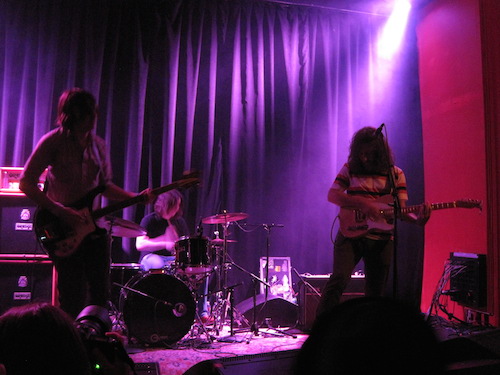 The Pink Mountaintops performed last night at The Chapel in the Mission District to a loyal crowd of friends and fans, who patiently waited for McBean and his new line up — which includes Dead Meadow’s Steven Kille, Will Scott, and Gregg Foreman of Cat Power — to take the stage.

McBean strolled through the venue with a peaceful flow in his step, but the night was colored by a dark undertone, thanks to a number of quiet quips that from McBean that mounted into a surprisingly violent climax at the show’s end.

“I don’t know, maybe it’s just that weird thing of life and pushing through it, the beauty of it, the sadness and the happiness of it,” McBean had said of his new album, Get Back, while he slowly sipped his first cocktail at the bar a few hours earlier. “The more you’re on the planet, the more amazing things will happen to you, and the more terrible things will happen to you, and you have to have the ability to constantly shake it off.”

While the hazy, eerie atmosphere coated the venue, LA’s Giant Drag was able to play a sensually dark set of songs, completely appropriate for the early evening. The crowd slowly trickled in throughout the night, not quite filling the room, and people seemed to shift and cycle through the venue, never standing in one place for too long. There was never a moment where there was a complete loss of the crowd’s attention, but there was quiet level of distraction going on. Whether it was because everyone had a chance to drink was much as they could possibly consume by the time Pink Mountaintops stepped onto the stage or whether the band’s hazy wall of sound was slightly lost in translation was not really clear. (“Me and Kille are the drunks and Gregg and Will are the sober guys,” Mc Bean had noted earlier.)

After opening with “How Can We Get Free?” and a fresh song, “Ambulance City,” from the new album, Stephen McBean broke a string and took his time to service and tune his guitar while the rest of the lineup improvised a song. Steve Kille swayed back and forth across the stage with his signature dance that closely resembles a confident swagger. After McBean got his guitar back in order, the set became more coherent and solid. The band flowed through “Wheels,” “Plastic Man You’re the Devil,” and “The Second Summer of Love” and the crowd began settling in, planting their feet on the The Chapel’s floor, finally beginning to engage with the music they were hearing.

Gregg Foreman, who has played with McBean as a duo and the sparsest version on Pink Mountaintops, shined. His erratically blissful guitar playing sewed the rest of the band’s slightly eclectic instrumentation styles together. Kille and drummer, Steve Scott, are very different musicians. If not for Forman’s unique experimental psych guitar style, the band would have lacked an off-kilter characteristic that kept the crowd’s attention during the middle and end of the show.

Everything seemed to flow peacefully as the show ended with the songs “New Teenage Mutilation,” “Sweet 69,” and “The Last Dance.” McBean played solo for the last song, and it was endearing and really lovely to watch — until McBean suddenly smashed his guitar over his amp, hurling it over his head several times until it cracked, ending the show on a strangely violent note.

The band had joined him on stage seconds before McBean attacked his guitar, and they put their instruments down just as quickly as they had picked them up after McBean walked past them leaving stage. The rest of Pink Mountaintops mingled with the crowd, seeming unaffected by McBean’s behavior, allowing their non-inner circle to slowly disperse from the evening’s odd occurrence. The show was weird, but the band is great.