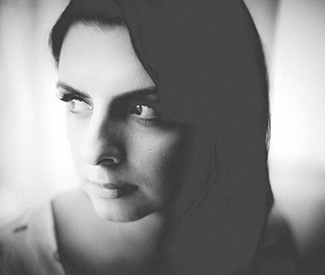 LEFT OF THE DIAL Regardless of San Franciscans’ often myopic focus on the tech-employed recent college grads who can afford the million-dollar condos on the market in the Mission, a much larger percentage of 20-somethings in this country will relate to the housing situation that shaped Maryam Qudus (aka Doe Eye)’s first full-length LP: The dreaded move back in with your parents in the ‘burbs.

“There were so many transitions going on while I was writing this record, that was the mode I was in,” says Qudus, 23, the Union City-born-and-raised daughter of Afghani immigrants. It’s the week before her first headlining show at Great American Music Hall [Thu/29], and she and her band are winding their way through the Midwest on a brief national jaunt; she’s calling from Oklahoma City. “I’d moved to Boston [to attend the prestigious Berklee College of Music], then moved back to San Francisco less than a year later to pursue music here. And when I decided I wanted to make a record, the way to do that financially was to move back home.”

If it felt like a stumble, that’s likely only in contrast to what had been up until that point a charmed music business debut: Doe Eye made an impressive entrance in 2011, when her four-song demo — in particular the ballad “I Hate You,” which highlighted her incredibly rich voice — earned the attention of DJs at Live 105 the week she released it. It also caught the ear of the godfather of young Bay Area singer-songwriters, John Vanderslice, who produced her second official EP, 2012’s Hotel Fire, on which the young singer got support from the Magik*Magik Orchestra.

Still, when it came time to focus on her first full-length record, living at her parents’ house, Qudus found herself in a weirdly liminal state. “Going back to the bedroom you had in high school is a very weird thing,” she says with a laugh. “It feels like you’re backtracking in some ways, but in other ways, it made me appreciate how supportive and awesome my parents are…which I definitely wasn’t thinking in high school.”

The result of her pseudo-adolescent regression is T E L E V I S I O N, featuring a more complex, full-bodied sound than her previous records have displayed, with Qudus’s raw, honest words and guitar-driven indie-rock sensibility seemingly filtered through layers of electronica, some New Wave and R&B moments; an industrial-lite kind of mood sets the base for her unmistakably strong (and getting stronger) vocals. If these songs feel distant, mediated at points, there’s a reason: The record takes its name from the activity the songwriter realized helped her unwind and turn her brain off after a day of sequestering herself inside her childhood home to write.

“I was dealing with various personal issues, and I would spend hours in my bedroom writing, and after a while when it became too much, I started turning on the TV to get away from it all,” says Qudus. “And I got into that pattern, which [I’d never done] before, and I started thinking about how people across America do this every day: Go to work all day at their job, come home and go ‘OK, I’m gonna watch Mad Men, or Conan, and try to forget everything that just happened.'”

Unsurprisingly, given the past few years of her career, the record (again, produced by John Vanderslice at Tiny Telephone) doesn’t exactly sound like an artist’s debut. That being the case, it’ll be interesting to hear what the next few years bring for Doe Eye. Qudus isn’t thinking too far beyond the First City Festival in Monterey in August, though. Beyond that, she has one main project: getting her own place in San Francisco again.

I promise it was unintentional to pair these two together in this fashion, but hey, speaking of good things that come from being holed up in one’s room: Life Among the Savages, the sixth studio album from Papercuts (the creative outlet of longtime San Francisco songwriter-producer Jason Quever) and his first for the LA-based Easy Sound label, is a testament to the good that can come from staying home.

That is, of course, if you have a home studio like Quever’s, Pan American Recording, where he’s produced Cass McCombs, Beach House, and Casiotone for the Painfully Alone, among others. It’s also where, most recently, Quever produced perhaps his cleanest, most sophisticated, most lush Papercuts record yet — full of a warmly melancholy ebb and flow that matches Quever’s cathartic, introvert’s tell-all style of writing. The atmospheric indie-dream-folk band has always been primarily a conduit for his songwriting; on this record perhaps more than others, you can hear the solitude in which it was conjured. (He’ll debut songs from the album, out May 13, at The Chapel this Sat/31).

“I think I did about 75 percent of the work here [at home], and yeah, it’s fair to say this one is pretty much all me,” says Quever, though he thanks friend and Beach House guitarist/keyboardist Alex Scally for having shaped some of his arrangements, like the urgent (Quever says “stabby”) strings that open the album’s title track.

“I also had some lyric help from my friend [songwriter] Donovan Quinn on one song. But other than that, I would say it was a lot of being inside my own self-hating brain,” Quever says cheerfully. “I’m working on it. But hey, it gets results.”

It’s a record two years in the making, during which time Quever left Sub Pop for Easy Sound (“They don’t have a huge roster, so you’re not going to get lost in the sea of bands the way you can with a bigger label”), placing Papercuts alongside sonic bedfellows like Vetiver. He also wrote a lot of music that he wound up scrapping.

“A lot definitely got dropped, but to me, what you’d drop is part of what you keep, if that makes sense,” he says. “It’s always moving toward something.” Papercuts songs are short stories and, contrary to what Quever calls most music critics’ impression of him, they’re not all autobiographical. He says he’s not, in fact, incredibly depressed all the time. (To be fair: Part of the oft-repeated Papercuts bio is that Quever started writing music after his parents both died when he was a teenager; there’s more than a little real trauma behind his trauma-swollen lyrics.)

On the other hand, “I’m pretty normal,” he says. “This is my outlet for all the negativity. That’s what catharsis is, right? You throw all your crap into this song and it feels good; I think that’s kind of a tennis match that’s in everyone’s head.” On this record, that catharsis is most interesting when playing with contrasts: On “Family Portrait,” things turn downright upbeat, with Quever gauzily channeling The Byrds (or maybe Ray Davies on Vicodin) through jangly guitar, while his lyrics still speak, poetically, of a vague fear, solitude, and uncertainty — tinged with hope, to be sure. The chemistry is born of the balance.

“I never want it to be all heavy or all light,” he says. “I think you naturally go through phases in writing, and that’s fine. The main thing with taking longer to make this record was I wanted songs where I felt proud of the lyrics.

“That way you’re not up there, you know, mumbling certain parts ’cause you feel dumb.”