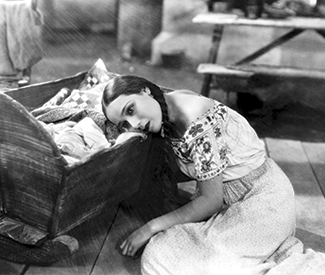 FILM Hollywood in the 1920s was shameless about inventing fictitious back stories for its stars, especially those “exotics” exploited for their allegedly foreign-bred mystery and sexual magnetism. The enormous success of Rudolph Valentino — whose 1921 breakthrough feature The Four Horsemen of the Apocalypse opens this year’s San Francisco Silent Film Festival — sparked a particular craze for “Latin lover” types whose true ethnicity was often disguised. (One such heartthrob, Ricardo Cortez, was in fact Jewish New Yorker Jacob Krantz — and when word got out that he was no Spaniard, the studio “confessed” that he was “really” Viennese.)

Yet the era’s leading Latina actress required little such invention, because her biography already sounded like a studio press release. Dolores del Rio was born Maria Dolores Asúnsolo y López Negrete to a wealthy, well-connected Mexico City family of Spanish ancestry. Convent-educated, she married at age 16 a patron of the arts over twice her age, with whom she honeymooned in Europe for two years. Upon returning home, she attended a wedding at which her beauty caught the eye of Edwin Carewe — a Hollywood producer, director, agent, and manager who in all those capacities soon began making her a star. Her first hit was as the main girl fought over by ever-sparring BFF Marines in World War I comedy-adventure What Price Glory?, a 1926 smash.

Her exquisite three-quarter-moon face, framed by long jet-black hair, then graced a series of romances in which she played Russian peasants, tropical maidens, hot-blooded gypsies, Carmen (of operatic fame), and Ramona (1928) — the latter a gorgeous half-caste in old Spanish California. She’s yearned over by the genteel master of the ranchero (Roland Drew), but prefers virile Indian shepherd Alessandro (Ohioan Warner Baxter, shirtless but wearing plenty of shiny bronzer). This third screen version of a hugely popular 1884 novel was boosted at the box office by an original title song recorded by many (including trilling soprano del Rio herself), and featured in the 1928 film’s synchronized-sound version (which offered sound effects and music but no dialogue).

Ramona was assumed lost for decades until a Czech-market print was discovered recently, its restoration premiering in Los Angeles just two months ago. The 2014 SF Silent Film Festival is full of movies that belie their age in one way or another — yet this hunk of overripe hooey feels a thousand years old. It’s surely the worst film in the festival, what with its mean-crone stepmother (“If you marry without my consent, the jewels will go to the church!”), teetering pileup of melodramatic crises, and particularly howl-worthy happy ending. Nor has del Rio’s heavily gestural performance aged well, with nary a genuine note to be found in an emotional gamut that galumphs from cow-eyed innocence to amnesiac shock. Still, she’s gorgeous. Whether cast as prole or grande dame, her looks were so striking it was natural for del Rio to become a beauty icon, promoting cosmetics and fashion as “the perfect feminine figure” — a title she won in leading movie mag Photoplay’s 1933 poll of industry glamour experts.

Del Rio was very conscious of her image — and of her responsibility representing Mexican culture to the world. Unlike rival Lupe Velez, she preferred projecting a more languorous, refined persona than the stereotypically comic, tantrum-throwing “hot mama” Latina. She disliked skimpy costumes and risqué scenes (though one of her biggest hits would be 1932’s Bird of Paradise, a charming bauble of pure eye-candy in which her island princess and Joel McCrea’s sailor pitch woo wearing as little as possible). She turned down the female lead in 1934’s Viva Villa!, suspecting that film’s take on recent Mexican history would be controversial at home. (Indeed, it was banned there.)

Her public character was invariably elegant and dignified — never mind that sometimes her affairs preceded her divorces. One high-profile lover was 10-years-younger Orson Welles. He took her to Citizen Kane‘s 1941 premiere and starred her in 1943’s spy intrigue Journey Into Fear. But when their relationship flamed out, and Hollywood’s affection too had cooled, del Rio at last returned to Mexico. There, she soon established herself as the local film industry’s leading female star — exclusively playing suffering, virtuous heroines — winning a total of four Ariels (Mexico’s Oscar) and very rarely returning to English-language features. When she did, it was no longer as the hothouse object of desire, but as a sacrificing mother, notably to Elvis in Flaming Star (1960) and to Sal Mineo in Cheyenne Autumn (1964), both times playing Native Americans à la the half-Indian Ramona. Such semi-color blind casting and “proud matriarch” roles provided a logical last act to a career that was honorable and iconic — if seldom quite so impressive in, y’know, the acting department.