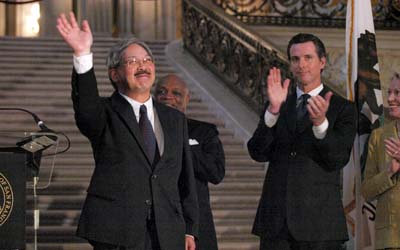 Mayor Ed Lee wields a strange and unique power in San Francisco politics, passed down from Mayor Gavin Newsom, and held by Mayor Willie Brown before him.

No, we’re not talking magic, though mayors have used this ability to almost magically influence the city’s political winds.

When elected officials leave office in San Francisco and a seat is left vacant, the mayor has the legal power to appoint someone to that empty seat. A study by San Francisco’s Local Agency Formation Commission conducted March last year shows out of 117 jurisdictions in California, and ten major cities nationwide, only seven jurisdictions give their executives (governors, mayors) the ability to appoint an official to a vacant seat. The other jurisdictions hold special elections or allow legislative bodies to vote on a new appointment.

The power of a San Francisco mayor then is nearly singularly unique, the report found, but especially when seen in the context of the nation’s major cities.

“Of the 10 cities surveyed here,” the study’s authors wrote, “no other city among the most populous grants total discretion for appointments.”

The study is especially relevant now, as Sup. John Avalos introduced a charter amendment to change this unqiuely San Franciscan mayoral power, and put the power back in the hands of the electorate.

His amendment would require special elections when vacancies appear on public bodies like the community college board, the board of education, or other citywide elected offices. He nicknamed it the “Let’s Elect our Elected Officials Act,” and if approved by the Board of Supervisors it will go to this November’s ballot.

Avalos touched on the LAFCo study while introducing his amendment at the board’s meeting on Tuesday [5/20].

“One of the striking results is how unique San Francisco’s appointment process is,” Avalos said. “There’s no democratic process or time constraint when the mayor makes these appointments.”

He pointed to then-Assessor Recorder Phil Ting’s election to California Assembly in 2012. Camen Chu, his successor, was not appointed by the mayor until February 2013, he said, a longstanding vacancy.

So what’s the big deal? Well, voters notoriously tend to vote for the incumbents in any race, so any official with their name on the slot as “incumbent” come election time has a tremendous advantage. In fact, only one supervisor ever appointed by a mayor was ever voted down in a subsequenet district-wide (as opposed to city-wide) election. This dataset of appointed supervisors was culled from the Usual Suspects, a local political-wonk blog:

Once at City Hall, Brown moved quickly to consolidate power, and using the skills he honed during his 31 years in the state Assembly, gained control of the Board of Supervisors. Before the 2000 election, he appointed eight of the 11 members, filling vacancies that he helped orchestrate, as supervisor after supervisor quit to run for higher office or take other jobs.

The board majority was steadfastly loyal, pushing through Brown’s policies and budget priorities with little debate. In a 1996 magazine article, he was quoted as likening the supervisors to “mistresses you have to service.”