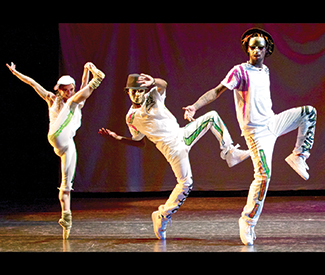 Now in his fourth year guiding the newly constituted Oakland Ballet Company, Artistic Director Graham Lustig seems to have found his stride in creating a troupe that respects its past but is no longer tied down by it. If, for the time being, the “ballet” part of the company’s name has to take a back seat to the place where it is at home, so be it.

“Oakland-esque,” four world premieres for OBC’s spring season at the Malonga Casquelourd Center for the Arts, offered an affable afternoon of spiffily danced, and at the very least conceptually intriguing, choreography.

Kudos to the program’s ability to throw a spotlight on the city’s tradition in the arts. Choreographers Sonya Delwaide and Molissa Fenley teach at Mills College. Jazz piano great Earl “Fatha” Hines spent his last years in Oakland, while Larry Graham (of Sly and the Family and Graham Central Station) grew up there and created what became known as “East Bay Funk.” Guests Sonsheree Giles and Joel Brown perform with AXIS Dance Company; Garion “Noh-Justice” Morgan and Rayshawn “Looney” Thompson do so with street dancers Turffeinz.

Delwaide’s Rocky Road, named after the ice cream invented in Oakland in 1929, takes a light-hearted but intricately shaped approach to Hines’ joyously embracing pianisms within a big band context. With a quartet of four (Jori Jahn, Megan Terry, Marte Madera, and Matthew Roberts) and two soloist couples, Delwaide’s tongue-in-cheek approach to both jazz and ballet brought out a commonality between these very different arts: Both shine with a surface of ease while demanding great technical facility; their soloists also often perform against backup groups, known in ballet as the corps.

Rocky‘s loose-limbed dancers kicked, slinked, and stepped with, against, and behind the beat. With the women on point, they inhabited a universe in which stylistic differences didn’t matter, but dancing full out did.

The soloist couple from inside OBC — the liquidly expressive and ever so versatile Sharon Wehner partnered by a refined Evan Flood — was paired with AXIS’s fierce Giles and Brown on wheels. In its individual duets and sharing the same stage, this quartet confirmed, one more time, that lyricism, grace, and power communicate no matter what shape they take. It helped that Delwaide has an embracing, refined choreographic voice.

Robert Moses’s choreography for TIP pitted furiously fast, shifting ensembles of various sizes against Graham’s bass-heavy, beat-heavier music. In part because of the dated-looking teenage outfits of white tops and checkered skirts and pants (by Christopher Dunn), I thought of Moses perhaps having looked at TIP as a memory of some 1970s club scene.

TIP began with a clump of people who just happened to come upon each other, and turned into a sweaty night in which they hooked up with each other and switched partners with ease. Some interactions stood out, such as the three sitting upstage who companionably slid along on their butts. Or the male dancer who tried out three women in a row. In a hetero duet, a woman lent much-needed support to her back-falling companion. TIP‘s surfeit of material developed a somewhat messy structure, yet it allowed the eye to wander over a sea of intense dancing, out of which limbs arose like curling smoke.

Mills College’s majestic grove of redwood trees has inspired both poets and painters. It also provided Fenley with ideas for the verticality, restraint, and elegance for Redwood Park. She set it on a quintet to a score by Joan Jeanrenaud, here excellently performed by percussionists Nava Dunkelman and Ann Wray. At first the music’s sharp attacks and tonal variations seemed at odds with the tranquil dancing’s soft strides and pliant turns spinning off into extended patterns — but as Redwood evolved, you realized that both arose from a calmly spacious sense of time. The piece was designed for five men, but Emily Kerr successfully pinch-hit for an injured one. While it was good to see dancers as different as Vincent Chavez, Flood, Madera, and Roberts attempt this spare choreography, not everyone was equally up to the task.

Turf dancing (taking up room on the floor) developed as way of claiming urban territory, and as a tribute to lives lost on Oakland’s streets. Lustig’s Turfland was a well-intentioned but unconvincing attempt to bring two of its practitioners to the concert stage, and have his ballet dancers in turn follow them out into the street.

Much of the piece looked improvised and none of the dancers — with the exception of Chavez, who fluidly straddled both worlds — seemed at ease. It takes more than performing on the tip of your toes, whether in blocked shoes or sneakers, to find a common language. These dancers were about as far apart as the washed-out visuals of the stage and the graffiti-inspired, scintillatingly beautiful backdrops by Samuel Renaissance. *